On the occasion of Christmas and New Year, most awaited movie of Bollywood Superstar Salman Khan 'Tiger Zinda Hai' has released on December 22, 2017. The movie is expected to be quite entertaining. Directed by Ali Abbas Zafar, Katrina Kaif is seen again with Salman Khan. If we consider Numerology, Mulank of release date is Numerology Number 4 and total number is 8. Hence, this date is under the combined effect of planet Rahu and planet Saturn. As far as the genre of this movie is concerned, this date seems to be positive. 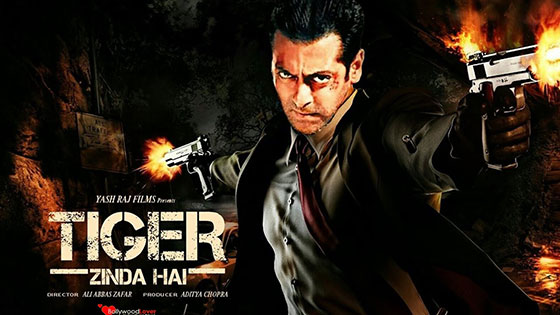 Name Number of this movie is also 4, which is matching with the Mulank (Numerology Number) of release date. Hence, we can say that the movie is in risk-free zone. It is a sign that the movie won't be a flop like Tubelight.

Name Number of Ali Abbas Zafar is 6; he is the director and writer of the movie. Neelesh Mishra has helped with screenplay and story; his name number is also 6. Hence, both of their stars also seem to be supporting the film. However, Producer Aditya Chopra has name number 2, which makes his position a little isolated.

In other words, release date is good for the name numbers of producer, director, and film, but it will be average for actors. However, 75% favor of release date for Salman Khan will impress the viewers to a good extent. Most people won't find the movie better than the first part, but they won't have complaint with Salman's acting. Lord of the constellation of release date, Moon is placed with planet Ketu and aspected by planet Mars. Shravan constellation is considered to be peace loving, whereas Moon is the significator of fights, wars, safety, security, etc. As the film contains matters like this, it will be a favorable situation. Hence, film is naturally getting the support of Mars, Ketu, and Moon. Hence, we can expect that this film will be successful.

So, the summary is that the film will be successful in entertaining the viewers, but they might not find the performance of actors upto the mark. As far as music is concerned, it will be effective of listeners as per the current trend, but there are rare chances that people will remember for a very long time. Considering the numerology, I would like to rate this movie 3 out of 5.