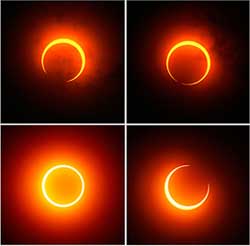 Splendid spectacle of eclipse shadows our earth, but can bring ominous changes in life of some people. Have you noticed evil influence of grahan or just ignored? Don't miss the time to observe impact of Surya Grahan 2016? Let's know here when Surya Grahan will occur in 2016? What to do or what not to do during Surya Grahan?

Remember! You can experience radical changes in any area of your life-Career, love, family, or income-just because of dark light on earth called 'Eclipse'. Surya Grahan 2016 or solar eclipse in 2016 will occur two times, one is on March 9 and other one is on September 1. The first Total solar eclipse on March 9 will hit zodiac sign Aquarius, and the second total solar eclipse on September 1 will occur at Leo. People across the globe, especially in India really consider the day of Surya Grahan seriously. They are always keen to know when the next Surya Grahan is. This curiosity is because of some beliefs attached to solar eclipse that enforce people 'what to do' or 'what not to do' on the event of Surya Grahan. People always keep on searching the coming auspicious or ominous changes due to this occasional event. It is not hidden that eclipses really bring changes not only in that particular time, but also in life of mankind. As per Hindu convictions, beginning or performing any good work during Surya Grahan is not considered good. Find below the time and date of Surya Grahan in 2016. It has been analyzed that both the Surya Grahan 2016 will be visible in some countries only, but not in India. First surya grahan 2016 on March 9 is expected to be seen in Australia, Palau, Singapore, Thailand, Malaysia, Indonesia, Taiwan, Japan, China, Myanmar, Sri lanka, Indian ocean & North Pacific ocean, India, South Korea, Guinea. And 2nd solar eclipse on 1 September in year 2016 will be visible in Africa, South Pole, Madagascar, Yemen, Saudi Arabia, Malaysia, Mozambique, Geban.

Now many people aspire to know what 'Surya Grahan' is. Solar eclipse is called Surya Grahan in Hindi. It is seen when the Moon passes in middle of Earth and the Sun, thereby totally or partially obscuring or hiding the reflection of the Sun. An annular solar eclipse is seen when the Moon's apparent diameter is smaller than the Sun. It causes the Sun to look like a ring and blocks most of the Sun's light.

It is apparent now that first surya grahan 2016 will occur in Aquarius sign and another will occur in Leo sign. Surya grahan 2016 in sign Aquarius and Leo means people born with these signs will experience notable changes near the time of eclipses. Changes can either be auspicious or unfavorable due to eclipses in their signs. People of other signs may also get targeted under attack or malefic influence of eclipses.

There are innumerable convictions or myths that are associated with Surya Grahan. For Hindus, occasion of Surya Grahan (eclipse) is not acknowledged good or auspicious. They feel that eclipse strongly hits the zodiac signs of particular houses in native's chart to show changes. And the person who comes in contact with Surya Grahan certainly faces notable changes either good or bad. But in most of the cases, Grahan endows bad or unfavorable results. So it is always better to follow rituals to protect yourself from malefic effects or influence of eclipses.

It is advisable always to take safe measures during Surya Grahan. You can follow some tips mentioned here:-