Kaal Sarp Dosh is a yoga formed due to presence of planets at either side of Rahu and Ketu axis. It is considered that if there is Kaal Sarp Yog present in any horoscope , that person may have a tough life. However, it is not always true. Mostly people have Kala Sarpa Dosha in their birth charts and they are successful in their concerned areas of life. Let's find out if you have this Yoga in your birth-chart or not with our Kaal Sarp Dosh finder: 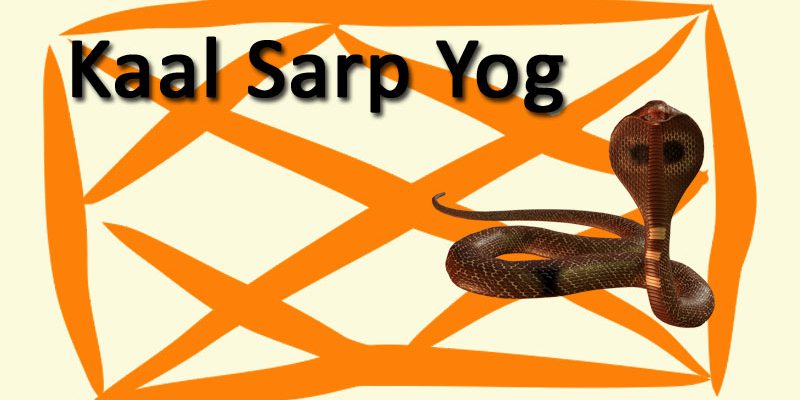 It is believed that this yoga is formed in birth chart due to bad karmas done by an individual in previous births. The person may get mental instability throughout the life if this yoga is present in the Kundali. There are also remedies and Kaal Sarp Dosh Puja defined to nullify its effects in Vedic Astrology. We need to understand first in depth about this Yoga before proceeding ahead.

What is Kaal Sarp Yog?

This Yoga is formed when all the seven major planets Sun, Moon, Mercury, Venus, Mars, Jupiter, and Saturn are hemmed between the shadow planets-Rahu and Ketu. As we know that Rahu and Ketu are 180 degree apart from each other, hence there is a possibility that all the other seven planets can occupy the place in between these two. This positioning of planets in a horoscope is known as Kaal Sarp Yog.

It is also necessary to check the degrees of the planets while analysing the chart for Kaal Sarp Dosh. Let's suppose if Mars and Rahu are in the same sign and Mars has 10 degrees while Rahu has 10.5 degrees, it will be considered the Kala Sarpa Dosha. Whereas if Mars has 10.5 degree and Rahu has 10 Degree, it will not be a Kaal Sarp Yog as Mars is not lying within Rahu and Ketu axis. The degree of Rahu and Ketu must be more than the other seven planets in the same sign for its formation.

As this yog is formed due to planets Rahu and Ketu, hence we need to understand about these planets, what do they mean and how these planets form the alignments with other planets to provide the results, depending on planetary placements in the horoscope.

Rahu is known as the "head" of Serpent. It is a shadowy planet or "Chhaya Grah", which does not have any physical appearance. It is basically not a planet, as it is north node of the planet Moon. However, it can be considered as a planet in Vedic Astrology, as it also influences people like other seven major planets. It is considered as a malefic planet in astrology. It has only head, that's why it only knows how to eat rather than how to digest the things. It wants to eat more and more. It gets exalted in "Taurus/Gemini" and behaves like planet "Saturn".

Ketu is called the "tail" of Serpent. It is also a shadowy planet or "Chhaya Grah" like Rahu. It is also not a physical planet. It is the south node of Moon. It affects human lives like the other seven major planets. Since it has only the tail or torso, that is the reason it doesn't want the materialistic gain. It is very spiritual planet that seeks only for salvation or Moksha. It is also considered as envoy of planet Jupiter. It gets exalted in "Scorpio/Sagittarius" and behaves like planet "Mars".

We have already discussed about the formation of this Yog. It can be formed in various ways. There are 12 houses defined in Vedic Astrology. Hence, it can be formed in 12 ways in one's natal chart. Let's find the names below of different Kaal Sarp Yog formations:

Generally, it is considered that this yog creates misfortune in every aspect of life. However, it is not always true. Although it may create hurdles in all matters of life like health, wealth, career, profession, love, marriage, children and many more events related to you, but ultimately you will rise through adversity in your life. It is also very important to know the exact effect of Kala Sarpa Dosha for an individual. For that, the exact positioning of shadow planets Rahu and Ketu are observed in any horoscope.

For example, if Rahu sits in first house and Ketu in seventh house, it may create hurdles for self and also to accumulate you wealth. If the same alignment falls in the second house and eighth house respectively, then native may suffer from family relations, wealth and other things related to second house. Hence this Yoga can be judged through the 12 houses in the horoscope by the placement of shadow planets.

People often think about it as a bad combination or alignment of planets in their birth charts. However, there is nothing mentioned about this Yog in any of the ancient astrological texts. Nevertheless, this yog is none other than the creation of the modern astrologers. As the passage of time, astrologers found some planetary alignments influencing the events of life either adversely or favourably. Therefore, it can be auspicious and inauspicious both, depending on the other positions of the planets in Natal Chart. Let's understand how it can be inauspicious for a person:

You might have to go with various difficulties in your life. You may experience death like scenarios. You may have troubles like diseases, loss of prestige, loss of wealth. You don't get what you actually deserve. Here are some problems listed below if you have inauspicious Kaal Sarp Yog present in your birth chart.

Though Kala Sarpa Dosha has its malefic influence over a person, but there is one more side of this yoga which also occurs. It can be considered as beneficial yoga. The results will be benefic if the same alignment is placed in kendra or trikona houses. You may ultimately rise through the adversity. You may suffer initially or at an early part of your life but it blesses you at last. There are many celebrities who have born under this Yoga. So there is nothing to worry about that. People born under this yog are very intelligent, hard working, energetic, efficient in managing and planning things as well.

Many prominent leaders, managers in corporate world, scientists, businessmen, civil services officers, and many other high-profile people have such yoga present in their chart. They all have rise through adversity. That means they have gone through some mishaps in their early part of life and later on, that struggle got converted into their success.

Hence in conclusion, it can be advised to think positive. The reason being, Kala Sarpa Dosha might take you to the heights of success and you may get what you actually deserve by showing your talent to the outer world.