Planet: Planets in Astrology and in your Kundli

Planets in Astrology play vital role to operate human lives. There are nine planets described in Astronomy whereas Vedic Astrology tells about seven major planets. Astrology Planets have its own significance to affect the human life. Our Solar System is gravitationally bound system which comprises of Sun and other objects (Planets, Asteroids etc.) revolve around the Sun. The Solar System contains planets, objects and also the Asteroid Belt which lies between the Planet Mars and the Planet Jupiter. All these planets and objects affect to "The Planet Earth" in a positive or negative way.

Name of the planets 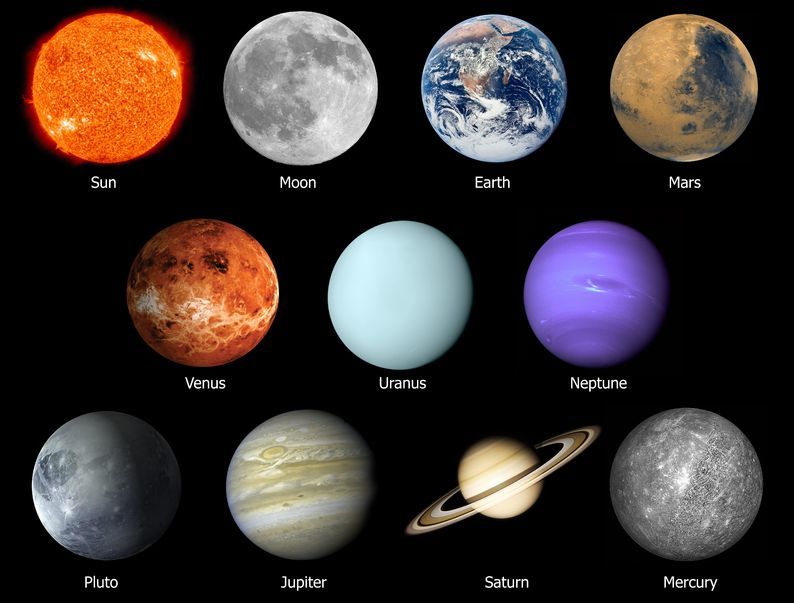 What are the 9 planets in order? Everyone is curious to know about the order of planets and how is it formed into our solar system? These are the questions which everyone might have in his mind. However, our science, based on Astronomy, couldn’t answer these questions. While Vedic Astrology is the science which already described about the planets and their motions in Vedas or ancient creations a long time ago. Our Rishis has already discussed about the planets and their impacts on Earth. In Astrology, only seven major planets are considered to influence life on Earth. The list of the seven Major planets are as follows with their distances in ascending order from Sun.

Sun (The King Planet) and the other major planets, which revolve around the Sun, are Mercury, Venus, Earth, Mars, Jupiter and Saturn. Apart from this, one more object is added in Vedic Astrology as a Planet named as "Moon", though we all know it is a satellite of planet "Earth" but Astrologically, Moon also affects the life on Earth as it is very closer to our planet. It is the main object in the Universe which affects the "Mind" of a person.

Though Venus is Considered as hottest planet in Astronomy, as it is very nearer to the Sun after Mercury whereas Astrologically, Sun is one of the hottest planet in the Solar System. Astrology Planets have their own significance based on their energies. Every planet has its own energy in Universe, which is commonly known as "Gravitational Force" in Astronomy and aspects or influences in Astrology.

What are the planets in Astrology and how it affect the life on Earth?

As we have already described the name of seven major planets and two nodes of the planet Moon. We follow the "Geocentric System" in Astrology where it is assumed that all the major planets revolve around the Earth or we can say, Earth is taken as a center. Now let’s understand how these planets give an impact over our life astrologically:-

Therefore, Planets in Astrology are very important to know the results of any activity. It shows how the life on earth is being operated through Divine. Objects, present in the universe, are affecting to other masses and hence our earth is also getting that influential energy from these masses. An Astrologer must study and analyse carefully all these planets placed in one’s horoscope in order to provide the right prediction.