Dussehra 2017: Victory Of Good Over Evil

In 2017, dussehra will be observed on 30th September. Every year, it is marked on the 10th day of Shukla Paksha in the Hindu month of Ashwin. That's why, it is also known as Vijayadashami. It is celebrated to commemorate the victory of good over evil. On this day only, Lord Rama killed demon Ravana in order to get Maa Sita rescued. To know more, read on this exclusive article only on AstroSage.. 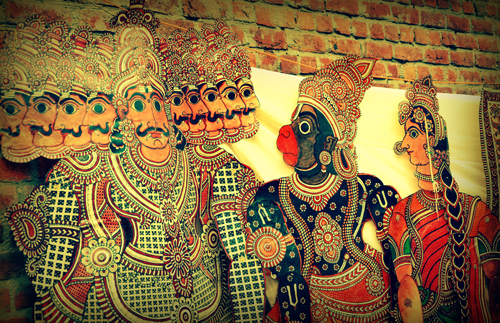 Dussehra is celebrated every year and we burn Raavan to celebrate the victory of Lord Rama. We bring our readers the real significance behind the celebration of Vijayadashami, which is also known as Dasara at Mysore.

India is a country of diverse culture and uniqueness. A nation belonging to vivid people, different ideologies and thinking. A land in which each festival is of equal importance and is celebrated by the whole nation together. One such festival is Dussehra or Vijayadashami, which is an important Hindu festival celebrated across the country with a lot of happiness and enthusiasm.

How To Celebrate Dussehra?

Dussehra holds a lot of significance for Hindus across the country. As per the holy scripture Ramayana, Lord Rama fought against Ravana's Sena along with his brother Laxman, his devotee Hanuman and the Vanar Sena (monkeys) for 9 days. It is believed that Lord Rama worshiped the Goddess, and with her blessing killed Ravana on the 10th day of Ashwin month. Since then, we celebrate this festival as Dussehra.

Before celebrating Dussehra, let's try to find out from where did the word has its origin.

Origin Of The Word: Dussehra - Vijayadashmi

Since childhood, we all know that we celebrate Dussehra by burning Ravana. Children of all age group enjoy the festival of Dussehra.

The name Dussehra has originated from Sanskrit language, which means Dasha (ten) - Hara (defeat) symbolizing the defeat of 10 headed Ravana. On the other hand, 'Vijayadashami' means the victory of the good over the evil on the tenth day of the Hindu Calendar.

On Dussehra, we take this opportunity to inform you about all the details related to this holy festival. We will demystify everything that had been hidden since ages about this glorious festival of Vijayadashami.

Why Is Dussehra Celebrated?

Vijayadashami or Dasara has a lot of importance for the Hindus across the country and globe. Let's read more to find out the real importance of Vijaya Dashami or Dussehra.

In the Hindu mythology, Dusshera is considered to be one of the most auspicious time when one's faith towards the good is again established. This festival marks the end of one's evilness, bringing faith, prosperity and good times in a person's life. Vijayadashami is one of those festivals which signifies the real meaning of good and symbolises the path of righteousness. This festival is celebrated on the 10th day of Ashwin month every year throughout India.

We wish that this Vijayadashami or Dussehra bring the best out of you. Since we now know the importance of Dussehra, let's find out more reasons why it is celebrated.

The Story Behind Dussehra

It is believed that every Hindu festival holds a real meaning or story behind its celebration. Read on to know more about the legends associated to Dasara.

During the 14 year exile of Lord Rama, Sita (wife of Rama) was abducted by Ravana (in his ego, pride and revenge), and kept in Ashoka Vatika in Lanka.

As per the holy scripture Ramayana, Lord Rama fought against Ravana's Sena along with his brother Laxman, his devotee Hanuman and the Vanar Sena (monkeys) for 9 days. It is believed that Lord Rama worshiped the Goddess, and with her blessing killed Ravana on the 10th day of Ashwin month. Since then, we celebrate this festival as Dussehra.

Post the battle, Rama returned to Ayodhya with Laxman and Sita; hence, this day is celebrated as Diwali in India.

This day is believed to mark an end to all the injustice, cruelty, ego, anger, pride, one's evil thoughts, and citing an example to remember throughout one's lifetime. Dussehra brings the end of all the misdeeds performed by Ravana (The king of Lanka) during his lifespan, Raavan (also known as Dashanan) in his pride, greed, anger, selfishness, jealousy and ego made such mistakes because of which he is still burnt on this day.

Dussehra is one such festival which is celebrated across various states in different forms, but with same enthusiasm, happiness and joy. Hope Dussehra brings the same significance in your life.

Let's have a look on how Dusshera is celebrated and will be celebrated across the country as well as globe. Hope this Dasara marks the same festivity in your life.

Dussehra Celebration Throughout The Nation

In India, Dasara celebrations occur in various parts of the country in different ways and forms.

Especially in northern part of the country, the initial nine days before Dussehra are worshiped in the name of the Goddess Parvati in 9 different avatars (Navratri),the tenth day is when Lord Rama defeated Ravana and his death marked the end of all the evils existing.

During this time, the depiction of the events of the Holy Scripture Ramayana are presented in the form of Ram Leela. This Dussehra we will all celebrate this festival by knowing the real importance of Dasara.

In Himachal Pradesh, the festival begins on the day of "Vijayadashami" and continues for 7 days. It is believed that the King Jagat Singh established Lord Raghunath as the idol and ruling deity for people of the kingdom. Since then, this practice of worshiping the Lord Raghunath is being followed and festival is named as "Kullu Dussehra". 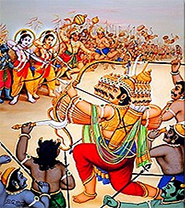 One of the most progressive state, Gujarat celebrates this festival with their regional dance Garba and Dandiya. In this festival, people celebrate their joy and excitement in the form Gujarati dance and music. The Garba dance usually revolves around the devotional songs of Lord Krishna and the Goddess in 9 different avatars. Dandiya is the dance played with sticks.

In the Southern states like Tamil Nadu, Andhra Pradesh and Karnataka, Vijayadashami has a different significance, families exchange gifts (clothes, sweets and other items), sing songs in order to celebrate the festival and share their happiness. Some of the families set up artificial dolls, lamps, flowers outside their homes on the steps specially designed by them. Every year this practice is followed on the very first day of Navratri, ninth day of the Navratri is worshiped as Saraswati Puja and the 10th day which is Vijayadashami is considered extremely auspicious and marks the commencement of a new beginning for the children interested in education, music and dance.

In Karnataka, especially in Mysore, the festival is of great importance and celebrated on a very large scale.

The royal palace will once again be illuminated and Dusshera will be celebrated in same spirit in the past years.

The 10 days of Navaratri are celebrated with full joy and enthusiasm. The special attraction during this time is Mysore palace, Chamundi Devi temple and Vijayadashami Elephant procession also known as "Jumboo Savari".

In Bengal, especially in Kolkata, the festival is celebrated as Durga Puja .

This celebration commences on the 1st day of Navratri, where worshiping of Goddess Durga in the form of Mahishasur Mardini is depicted.

This time is believed to be one of the most auspicious times, when Goddess Durga marked the end of Mahishasura (the demon) bringing an end to all the misdeeds prevailing in the society. During these 9 days, various idols of Durga are depicted in different Pandals, where people worship her in this form and seek her blessings. This festival ends with the Visarjan of the Goddess' idols in river, pond or sea.

Dussehra or Vijayadashami is the festival which can be described in these few lines:

The occasion of Dussehra is the time,
When the good emerges and the evil dies.
The message is still so dominant for the mankind,
That the Ravana is burnt every year.
Depicting that the justice will always rise.
There would be a day when the evilness, ego and pride will die,
The true lighting will prevail in one's life.

Dussehra-Vijayadashmi one of the most auspicious times,
Marking a belief of humans strong in the truth, justice and the good times.
The 10 day festivity marking the new beginning and bringing happiness to one's life,
A belief that the holy Gods/Goddesses are present on earth to bless and help everyone in doing right.
A real time to shun off the darkness of one's mind, bringing the righteousness in one's life.

So, the festival of Dussehra is a time of the new beginning and of belief that any work begun in this time will always have the blessings of God. Hence, from ages, we have been celebrating this festival with full devotion and enthusiasm. Dussehra is the time to make a new beginning and to do good in one's lifetime.

AstroSage wishes all its readers a very Happy Dussehra - Vijayadashami..!