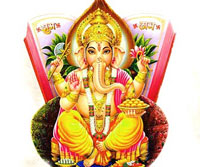 About Lord Vinayaka - Who is Lord Ganesha?

Another name of Lord Vinayaka is Lord Ganesha. He is the Lord of prosperity, wisdom and auspiciousness. Ganesh Purana Kridakhand explains about the various incarnations of Lord Vinayaka. Let's know a brief about it here -

Treta Yuga: Born as Mayureshwara because of mounting on a Mayur (peacock). His complexion was white and had six arms.

Dwapara Yuga: Born as Gajanana with an elephant head, white complexion and four arms. He mounted on a mouse.

Kali Yuga: It is believed that it is the last era of human existence on Earth and Lord Vinayaka will be born as Naramuga Vinayagar. Naramuga means human head and as he will be incarnating with a human face he is named Naramuga Vinayagar. It is believed that Lord Vinayaka will be incarnating in Kalyuga because humans will go far from spirituality in this time and their connectivity with divinity will be close to extinction.

Legend Behind Vinayaka Chaturthi - How Was Lord Vinayaka Born?

The legend describes that Lord Ganesha was made by Goddess Parvati, consort of Lord Shiva. She made the body of Vinayaka with the sandalwood paste she used to use for bathing. Further, she made that sandalwood idol alive by breathing life into it. Goddess created him with the intention of making him guard the door while she was taking shower. While Lord Vinayaka was guarding the door, Lord Shiva approached Goddess Parvati's place. As he was unaware of Lord Shiva's identity, he tried to stop him. This made Lord Shiva furious and they started fighting with each other. Even Lord Shiva was unaware of Ganesha's identity. Lord Shiva detached his head from his body using his weapons. Suddenly, Goddess Parvati came out. Seeing the dead body of her son Ganesha she became furious and demanded his life back. Everybody was in awe to know that the boy was actually Goddess Parvati's son. All the Gods and Lord Shiva apologized for their sin. Further, Lord Shiva ordered other Gods to bring the head of a child whose mother would be sleeping facing her back towards her child. During search, they found a mother elephant sleeping while facing her back toward her child. They detached the head of the baby elephant and brought back to Lord Shiva. Further, Shiva placed that head on the body of Vinayaka. This is how Vinayaka was born again with elephant head and got a name - Ganesha from his father Lord Shiva. Since then, we know Lord Vinayaka as elephant headed Lord.