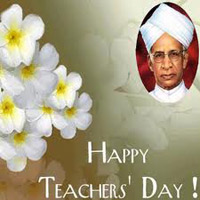 Teacher's Day is celebrated all over world to pay tribute to the teachers. In India, it is celebrated on September 5th. However, most of the countries celebrate it on 5th of October. That is why; October 5 has been recognized by UNESCO as the World Teacher's Day by adopting the "Recommendation concerning the status of teachers". Teacher's Day is annually celebrated like all other special days. Each country has its reason for the date selection of teacher's day because all of them have their own dates. For example, Australia celebrates it on the last Friday of October, Bhutan on May 2, Brazil on October 15 and China on September 10, to name a few. The common thing is that, each country celebrates it to commemorate either a local educator or some academic legend. Indians celebrate it on 5th September every year on the special occasion of the academic philosopher and second president of India, Dr. Sarvepalli Radhakrishnan's birthday. However, it is observed in India that most of the students hardly know this fact why September 5 has been chosen as the National Teacher's Day.

Teacher's Day is the most special festival for students because it is the only day celebrated with full zeal and gusto in the schools and other academic places. Let's know more on this special day via below mentioned links.

You must be wondering why Teacher's Day is celebrated on the birthday of Dr. Sarvepalli Radhakrishnan only, not any other person. It is because he is an academic legend as well as proved himself a great dynasty by turning out as an ideal President of India. The second President of India was amongst the most influential scholars of comparative religion and philosophy. He was the one who bridged between the East and West in terms of philosophical systems by proving that each tradition is understandable from different terms of each other. India's religious and philosophical literature was simplified by him for the English speaking world. He received many honors, such as Bharat Ratna (1954) and Order of Merit (1963), to name a few. Before Independence, he was knighted in 1931, but he stopped using title "Sir" after India got independence.

Teacher's Day is not only about fun and frolic of the festive feel, but it gives a special message on the significance of teachers or 'Gurus'. It puts an influencing role to the life of every student. Teachers are like the beacons of light who guides us in the sprouting years of life. They are the makers who shape us for the coming future. Their teaching guides us throughout our lives. However, we hardly find time and ways to show our gratitude toward them and Teacher's Day brings us the chance. The main reason behind this celebration is not only about paying gratitude, it also helps in encouraging teachers by making them realize the value of their efforts. With this, we wish you all "Happy Teacher's Day" and wish for the grow of teacher-student bond every year.