Kali Puja 2017: She Is Dark Enough To Enter Light

The holy date of Kali Puja in 2017 is October 19. If you are feeling insecure amidst the evil spirits surrounding you, Kali Maa is always there to stand against the evil. Do not miss the chance to invoke Kali Maa, as we bring you everything about Kali Puja. Read below...

Kali Puja : Who Is Kali? 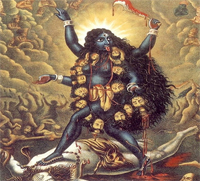 Kali Puja is considered to be one of the most sacred Hindu festival, especially by the Bengalis. Hereby, AstroSage brings you some significant information about Kali Puja. Want to know them? Let's proceed.

Goddess Kali, also known as Kali Maa, is the embodiment of Mother Goddess. Kali is the first incarnation of Goddess Durga. Kali Puja is devoted to Goddess Kali.

Kali Puja is performed to venerate Goddess Kali to protect ourselves from the surrounding evil forces.

As per beliefs, Kali Maa was born from Durga's eyebrow. Goddess Kali is also popular as Kal Bhoi Nashini, meaning the destroyer of fear. The grand worship of Kali is conducted on Amavasya of Kartika month. On this day, Maa Kaali is invoked intensely to receive her blessings.

Want to know more about the rituals and procedures of Diwali? Then, click here: Diwali Puja Vidhi

Devotees worship Goddess Kali following the method that had started a long time ago. But, what is the actual reason to celebrate Kali Puja?

Let's take a look at why Kali Puja is celebrated every year.

Why Should We Celebrate Kali Puja?

Maa Kali is honored during the festival of Kali Puja. Now, we will be discussing the legend associated with Kali Puja that led to the reasons for performing Kali Puja.

According to the holy Hindu scriptures, peace in heaven was once disturbed by the demons, Shumbha and Nishumbha. This had brought chaos all around the heaven and earth was soon inflicted by this. The Gods had lost their hopes, as they were unable to defeat the demons after successive trials.

Hence, they decided to seek help from the Goddess of Shakti (power), Devi Durga. Kali was born as Kal Bhoi Nashini as an Avatar of Durga. She was incarnated to save the universe from the evil forces.

Accompanied by her escorts Yogini and Dakini, Kali Maa started her killing spree and began to slaughter the demons. She is depicted with human skull all around her neck. These heads are that of the slaughtered demons. But, by then, the condition had become extremely chaotic to control. Kali slaughtered any fellow who came in her path. Her unconscious act was causing the death of many innocent lives.

Lord Shiva had to place himself under her feet and pacify the situation. As Kaali Maa stepped on Shiva's chest, she repented her deed and spilled her tongue out in astonishment. Thus, the picture of Goddess Kali with her tongue out has become a popular depiction. Ever since, this day is celebrated as Shyama Puja or Kali Puja.

How Kali Puja Should Be Celebrated?

Kali Puja is celebrated with great enthusiasm and zeal in the eastern part of the country. Bengalis and Assamese celebrate it with an almost parallel mood, if compared to Durga Puja. Let's begin with the celebrating pattern of Kali Puja.

Kali Puja is one of the most popular festivals in Bengal; although, it is also celebrated in other parts of the country. Mainly, Kaali Maa is worshiped in two ways. They are:

Brahmanical worship of Goddess Kali includes preparation of Puja at households. In this style of worship, Kali is worshiped as Adya Shakti Kali.

Tantric worship of Kali includes chanting of Tantric Mantras and Stotras. Animals are ritually sacrificed in this type of worship. Let's take a look at the ceremonial offerings done to Kali Maa:

Pandals (temporary structures) are created, where statues of the deity are installed. Since, it coincides with Diwali, fireworks and crackers light up the regions of Bengal and Assam. But, there is a thing that is worth noticing that the cremation grounds in Assam and Bengal stay to be the main centres for Tantric Kali worship. This kind of worship is popular where Tantric rites are performed after midnight.

Kaali Maa is worshiped in vivid forms and that too with varied significances. Let's take a look at some of the popular forms of Goddess Kali: 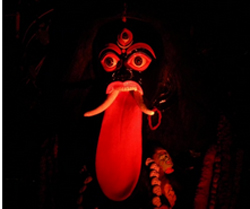 Chamunda Kali sucked his blood and prevented him to duplicate his clone. Thus, she was able to kill the demon, and the earth was saved from the terror created by Rakhtbeej.

Smashan Kali is worshiped by Tantrics. In this kind of worship, ritual of sacrificing animals take place and their blood is offered to Kali Maa. 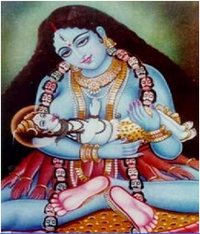 When, Maa Kaali got out of control in her killing spree against the demons, Lord Shiva went to the battlefield as a small, crying infant.

In order to pacify the infant, Kali controlled herself and picked up Lord Shiva (as infant) in her arms. This form of Kali is considered to be tender and soft-hearted. Mother Kali is the benevolent and generous form of Goddess Kali.

Kali Puja celebrates Goddess Shakti in her ferocious form of Kali. As we have focused on each and every relevant points about Kali Puja, we hope you would be able to capture the gist of Kali Puja. Even if you don't belong to Assam or Bengal, there's nothing to worry.

Diwali : It's Time To Go Out Of East India!

Diwali is mainly celebrated in the northern and western parts of the country. If you are unknown to the celebration of Diwali, do not wait and take a look at the days of the festival of Diwali. Following are the five days of the Diwali festival:

Thus, the five-day festival of Diwali or Deepavali comes to an end. Despite regional variations, the festival of Kali Puja and Diwali are almost the same when the annihilation of darkness and evil is celebrated.

Goddess Kali will definitely lend her holy steps at your doorstep. On Kali Puja, do not miss the chance to greet your friends and relatives with Kali Puja SMS and greetings. You can add more flavor to this festival with Kali Maa images. Open the door of your hearts to welcome Kaali Maa with warmth and devotion.

Goddess Kali is always beside to destroy the evils surrounding you. Enjoy the Kali Puja with better arrangements and a pious heart.