Onam is a harvest festival which is mainly observed in the parts of Southern India. According to the Malayalam Calendar, it is celebrated in Shravana Nakshatra in the month of Chingam. In 2017, it will be marked on 4th of September. It is a 10 days festive carnival. It is also known as Thiruvonam. If you want to know more, read on this article only on AstroSage... 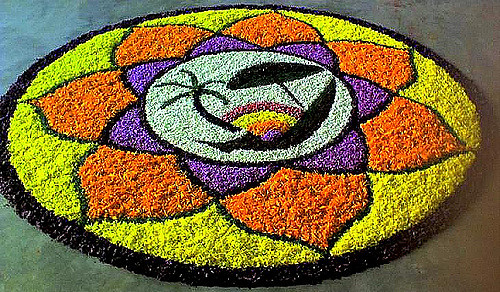 Onam, a festival celebrated year after year with great zeal and zest, is a tribute to the beloved King Mahabali. The state of Kerala triumphed under the rule of King Mahabali. Though he was an Asura (demon), he performed exceptionally well as a King. His people were never short of anything under his rule; it was a golden era for them. King Bali was greatly respected for his undying devotion to god and for his selfless sacrifice for his people. Since then, the state of Kerala has been celebrating the festival of Onam in remembrance of King Bali; and the Onam celebrations will be an event to remember.

King Bali was greatly respected for his undying devotion to god and for his selfless sacrifice for his people. Since then, the state of Kerala has been celebrating the festival of Onam in remembrance of King Bali; and the Onam 2017 celebrations will again be an event to remember.

The festival of Onam is celebrated in the month of Chingam, as per Malayalam calendar. This time of the year is the harvest time for the farmers and as such, it is also called the harvest festival of Kerala. This is a festival looked forward by every person, irrespective of their caste or religion. It's a festival celebrated by people of Kerala as a whole and not just individual communities. Onam is the most popular event that takes place in Kerala every year and the state proudly promotes this season as the tourism season. Now, let's know more about the celebrations in detail.

Onam will be a time to celebrate and share your joy with one and all. Make use of AstroSage's exciting messages to wish your loved ones.

Click here to reach them - Onam Wishes In English & Malayalam

How To Celebrate Onam?

Onam, a festival celebrated year after year with great zeal and zest, is a tribute to the beloved King Mahabali. The state of Kerala triumphed under the rule of King Mahabali. Though he was an Asura (demon), he performed exceptionally well as a King. His people were never short of anything under his rule; it was a golden era for them.

The first day of Onam starts with the celebration of Atham. Grand Poo Kolam (flower Rangoli) designs are made as a sign of welcoming king Mahabali. It is believed that King Mahabali pays a visit to Earth from netherworld (Patala Lok) during the Onam festival. The Poo Kolam, which is made on the first day, gradually increases by size by the end of the tenth day, which is the Thiruvonam. On this day Atham or Hasta Nakshatra (constellation) prevails.

The people of Kerala get busy with decorating their homes for the Thiruvonam celebration. Old and unwanted things are discarded; some paint their houses new and put all their efforts in making things look new and beautiful. On this day, Chithira Nakshatra prevails.

This day probably gets the highest vote from women. Oh yes! It's time for shopping. People make sure that they are in their best looks during the Onam season. Shopping for gifts and clothes begin on this day. The Nakshatra (constellation) which prevails on this day is Swati (Chodhi).

The day of Anizham just takes the excitement of Onam one notch higher, as the rehearsals for the famous boat race starts today. The Onam boat races called Vallamkali, which happens annually, is a very popular event. It is a major tourist attraction. People from all over India and abroad come to witness this spectacular event. On this day, Anizham (Anuradha) Nakshatra prevails.

The day of Thriketta is the day when all the family members gather for Onam celebrations. People working far away from home take a 5 days holiday and head toward home. Family gatherings and social events get grander from this day. On this day, Thriketta (Jyeshta) Nakshatra prevails.

The excitement gears up with just two days left for the final day, Thiruvonam. It is from this day many temples arrange the grand Onam feast called Onasadhya. Cultural events like Puli Kali, which is a masked leopard dance and Kaikotti Kali, which is a traditional dance performed by women, takes place. On this day Moolam (Moola) Nakshatra prevails.

With the final day (Thiruvonam) just around the corner, the excitement reaches sky high. The main events of this day are the Pooradam Uttigal and Pooradam Unnigal. On this day, people make mud idols of God Vamana and king Mahabali called Onathappan. The design of Poo Kolam gets to a whole new level of complexity. On this day, Pooradam Nakshatra prevails.

Uthradam, the day before Thiruvonam is celebrated as the first day of Onam. Every house lays out an elaborate carpet of flowers called Poo Kolam to welcome their King. Fairs and events reach its peak on the eve of Onam. On this day, Uthradam (Uttara Ashada) Nakshatra prevails.

The final day of Onam, Thiruvonam can only be described as the ultimate celebration. All the events are showcased on this day. People turn out from all over the country to witness this celebrations. Onasadhya will be arranged by every home. Cultural events like folk dance, Kathakali performances, boast races, Poo Kolam competitions, all reach the grand end. With the end of this day, the people of Kerala bid goodbye to the beloved King Mahabali, who then returns to his netherworld.

Most Popular Events Of Onam

The event of Vallamkali is the crown jewel of Onam celebrations. This event is not only a favorite among the locals, but a big favorite with the foreign crowd too. This boat race is in function from a long time, but its popularity shot up after Pandit Jawaharlal Nehru's visit. Nehru ji was so impressed by this spectacular event that he started an annual competition, which is followed even now.

Significance Of The Vallamkali Boats : These boats are specially crafted for this purpose. The boats have special characteristics; they are about 100 ft. in length with a seating capacity of about 140-150 people. The curved shape of the boat is made to look like a cobra. The boat has a high sentimental value among the local fishermen. A lot of effort and dedication is put into the making of these boats. The villages in and around the Pamba river spend months in preparation of these boats to participate in the annual boat race, which is an event one should not miss.

Puli Kali is the famous tiger dance. People with eye catching body painting parade on the roads dancing to the music of drums. They perform a dance skit of Pulikali, meaning hunt of the tiger. Pulikali performance is a big crowd puller. The most popular place where this folk dance takes place is the Swaraj Round, Thrissur. 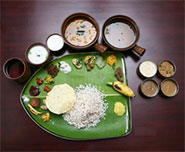 This is a meal one wouldn't overlook. This nine course meal is cooked once a year and the taste lingers until the next Onam Sadhya. There is a saying in Malayalam - 'Kaanum Vittum Onam Unnanam', which means that people go to the extent of selling anything in their possession just to have one Onam Sadya meal. The meal is served on a Banana leaf, as per the traditions and approximately 60 dishes are prepared on this day. There are over 20 varieties of Payasam (dessert), which is the most popular among tourists.

There is so much more to this spectacular festival, which is celebrated in Kerala. Tradition, culture, joy and true dedication defines this festival. It should be in every person's wish list to attend at least one of Onam celebrations. With this, we wish everyone a very Happy Onam..!