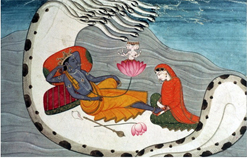 According to the Hindu calendar Dev Uthani Ekadashi takes place on the Ekadashi Tithi of Shukla Paksha (bright fortnight) in the Hindu month of Kartik. Prabodhini Ekadashi means 'the awakening eleventh'. It is believed that on this day, Lord Vishnu wakes up after sleeping on the day of Dev Shayani Ekadashi. Hence its name is also popular as Dev-Prabodhini, Deothan, and Dev Uthani Ekadashi.

Now, let's know when the day of Dev Uthani Ekadashi in 2017 will be observed.

Parana Muhurat is the auspicious time of breaking the fast on Dev Uthani Ekadashi. The Vrat of Prabodhini Ekadashi should be terminated within Dwadashi Tithi (succeeding day).

It is said that Goddess Laxmi was unhappy with Lord Vishnu as he followed an undisciplined pattern of sleeping. It often happened when Vishnu slept for days and there were days when he didn't sleep at all. It was due to his this habit that other gods and goddesses had to wait for long to meet him. Furthermore, demons highly took advantage of this, thereby leading to the spread of Adharma on earth. Hence, Goddess Lakshmi complained about all these to Lord Vishnu.

Vishnu promised Laxmi to soon come up with a solution. Meanwhile, the Devas visited Vishnu to inform him about the robbery of the Vedas by Sankhyayan, a demon. The demon had soon spread Adharma all around. On hearing this, Lord Vishnu assured the Devas that they would be able to get back the Vedas.

After fighting for days with Demon Sankhyayan, he was successful in defeating Sankhyayan. He was then able to return the Vedas to the gods. Concluding the event, Vishnu continued with a long sleep for four months.

How To Observe Dev Uthani Ekadashi?

Following are the rituals that are to be carried out on Dev Uthani Ekadashi:

But, why one should observe such austerities on this day of Ekadashi? We must definitely know the significance of Dev Uthani Ekadashi. Let's take a look at it.

Now, we will take a look at the different patterns of observing the day of Dev Uthani Ekadashi. Let's proceed:

In Rajasthan, Dev Uthani Ekadashi takes place at Pushkar where Pushkar Mela is organized. This continues till Kartik Purnima (full-Moon day). Pushkar Mela is held to worship Lord Brahma. It is believed that if one takes a holy bath in Pushkar lake, one can attain a step closer to salvation. The fair is continued till Kartik Purnima. During the period, a camel fair is also organized in Rajasthan, which is considered to be Asia's largest fair.

In Gujarat, a Parikrama (circumambulation) is held by the devotees at Mt. Girnar for a two-day period. It is believed that the Lord resides around the mountain during Dev Uthani Ekadashi. Over 800,000 devotees pay reverence to Lord Vishnu on the day of Prabodhini Ekadashi at Mt. Girnar.

Lord Vishnu is coming to you this Dev Uthani Ekadashi. Don't miss the chance to venerate him and achieve the blessings of divinity from the Lord.

We hope that this article has been able to deliver you a detailed picture of the day of Dev Uthani Ekadashi.

AstroSage wishes you all a Happy Dev Uthani Ekadashi..!