Construction of Temples in Vastu 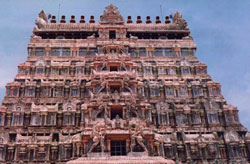 Temples are the places of worship for the ages in the past. They are the sources of certain fine arts such as dance music, silpa and the writing of poetry-The emperors in various periods have taken steps to improve the temple architecture. A Special subject was developed to the management of temples. That is what is called as Agama Shastra, Agama Shastra laid down certain principles regarding the maintenance of temple and such other things relating to the piety of the temples.

One had better take the help of elders while constructing a temple. It should be built according to AGAMA SHASTRA. The temples of Lord Shiva, Rama, Vishnu Sri Venkateswara, Sri Subrahmanyeswara, Vinayaka should be built in accordance with the rules laid down in the Agama Shastra keeping the Chakra to the place the status, to put Kumkuma and to offer the daily worship.

While building temples, we have to follow the temple rules. In day-today life man needs health, wealth and languish. Worship of God always is good for us. The primitive man started making stone-statue the moment he used to use tools made of stones. Viswakarma is said to be the architect of these stone statues.

The word "Sthapathi" means the sculptor of a village, town and a house, a temple and other things. The ancient pandits gathered the meanings of Vastu terminology, and considered them as synonyms. They mixed the subject of Vastu and silpa and wrote books.

The temples of Shiva should be with western face. The Veeranjaneya temple should be of south face.

The temples of Vinayaka, Navagraha, Veera-bhadra should be with North face.

The trees that are worshipped in the name of deity small temples built to worship Amma (Ganga-namma etc,) should be built according to Vastu rules. The people who are interested in such activity - the trustees, Vastu pandits, masons and carpenters should maintain deity as long as they are in that work so as complete them successfully and perfectly. Otherwise, it leads to many setbacks.

If the Vastu rules are not followed, the people who involved may face many problems. People are-put to suffering.

Before securing site to build a temple, are should consult the Pithadhipathis. They should also consult the chief sculptor of the temples. The people should form into committee. The foundation-stone should be laid by a great man.

While building a marriage altar, we have to think of the soola or the mothapotu as conceived earlier. On the marriage altar, the couple should sit in such a way that they face the Eastern side. We must see that there are no ups and downs on the floor to avoid any inconvenience.

Government Constructions as per Vastu

Governments are formed of people, by the people and for the people. The Housing board people are getting the houses, quarters, offices, godowns, workshops etc. constructed according to modern engineering. Some of the present day engineers lack the knowledge of Vastu. So, the dwellers of these houses and colonies are facing some problems.

In many of the towns and cities many buildings are being built according to modern engineering. But if they coordinate engineering with Vastu, they can avoid many problems, if so, people will prosper.