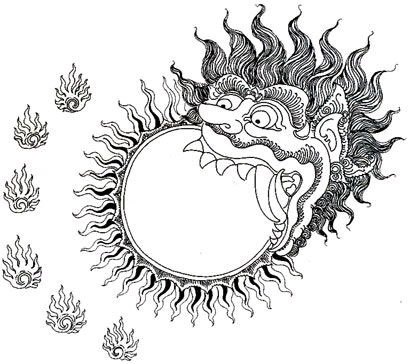 Basically for the entire year in 2017, we have a total of four grahan or eclipse taking place. Two of which are Surya Grahan (Solar Eclipse), and the other two, Chandra Grahan (Lunar Eclipse). Before stepping into the details, let’s have a quick look as in what does a grahan or eclipse means in solar & a lunar forms in Astrology & otherwise.

Whenever a celestial body gets covered partially or completely with another celestial body, that particular event is known as eclipse or grahan. If we talk in terms of Astronomy, a grahan or eclipse happen when the Sun, Moon and Earth are aligned and either Earth or Moon comes between the other two planets. These occurrences give birth to two types of eclipses; Solar Eclipse (Surya Grahan) & Lunar Eclipse (Chandra Grahan).

Surya Grahan : When the moon is directly intercepting the Earth & the Sun, a solar eclipse is in tandem. There is a connecting force in play between the Moon & the Sun. During this rare state, the Sun gets completely cloaked off by the Moon. Although the time span for it isn’t much, yet this period is considered to be very highly in terms of Astrology.

Chandra Grahan : A lunar eclipse is said to have taken place when the Earth is placed exactly between the Sun & the Moon. A force of opposition exists between the Sun & the Moon in this case. The Earth is on hand to illuminate the moon into shades of red, grey as well as brown. Just like a Solar eclipse, this too holds quite great a significance in the Astrological world. 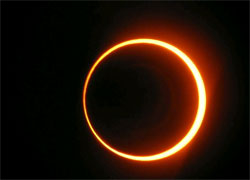 This year, we shall witness two solar eclipses. The first one falls on 26 February, while the second one could be witnessed on 21 August. Although both of these would not be seen in India, it is pretty emphatic in terms of the astrological importance that these eclipses hold.

This year we shall observe a solitary, partial lunar eclipse. 7th August is the date when this grahan would be seen in full (& by full we obviously mean partial) effect. But, a penumbral lunar eclipse would also be observed this year on 11th February, 2017.

*Note: Penumbral Lunar Eclipse is not an actual lunar eclipse. In this eclipse, the moon doesn’t move from the shadow of the earth, instead it moves through the outer part of the earth’s shadow where its arc gets slightly dusky.

This grahan shall befall on Shravana (श्रवण) nakshatra, on the zodiac sign Capricorn. The Sutak or the ominous time would start taking shape at 1:44 pm, on 07 August. Once the eclipse has started, it is usually understood not to eat, sleep, touch the idols or even indulge in funny moments. It is strongly advised that once the eclipse is in effect, activities like bathing, chanting holy mantras, venerating the almighty as well as hosting a hawan should be carried out. Once the eclipse is over with, one should donate/offer eateries to the poor and needful, as well as take a bath to wash off all the impurities that might have gotten on, during the eclipse.

The effect of Chandra Grahan on all the zodiac signs

This eclipse shall fall on Shravana nakshatra, & on the zodiac sign Capricorn. People who come under this category either by birth or by name would be affected accordingly by this eclipse. Pregnant women must be careful not to expose their eyes to the eclipse.

Mantras to chant during the grahan

During the Surya Grahan, chant this below stated mantra:

Chant the given mantra during the Chandra Grahan:

Myths surrounding the eclipses as per the Puranas

According to our hindu mythology, Eclipses are usually considered very inopportune & damaging as well. People associated with a particular nakshatra and zodiac sign shall be effected by this eclipse in a very calamitous way. However, if you chant mantras during this period it would shield you from the dark & ill effects of the eclipses.

A quick glimpse in the old stories about the Grahan

As per the hindu’s sacred text, the gods & the devils were churning the sea in order to drink the nectar from within, to become immortal. After a lot of struggle, the nectar finally came out of the closet, only to be snatched away by the devil lords. Hearing of all this, lord Vishnu instantly transmogrified into a disguise also known as the mohini avatar, as he tricked the evil lords into giving him the nectar. He promised to divide the divine drink equally between the two. Suspecting that the avatar might have some tricks up his sleeves, Rahu quickly changed his disguise & stood amongst the gods, to drink the nectar. As soon as he engulfed the drop, the Sun & the Moon god, realizing the deception, quickly informed Lord Vishnu about the treachery that had been done. Lord Vishnu obliged by beheading him & his body divided into what we now know as Rahu & Ketu. It is due to this very reason that these two eclipse the Moon & the Sun.

The most inopportune time of the Grahan (Sutak kaal)

What exactly is a Sutak?

The sutak is a small duration of time, that starts 12 hours prior of an eclipse. People are of a very strong opinion that during this space of time, one shouldn’t start off with an auspicious activity of any kind. The reason for such a strong belief is due to the fact that the said kaal is considered to be pretty dull & gloomy. It feeds on negativity & conjures darkness to engorge the light. Once eclipse is over with & you have taken a bath, the sutak kaal ends with it.

Things to watch out for during a Sutak

Pregnant ladies should be very aware & careful during this period, before, after & during the eclipse. One should avoid stepping outside the premises & making an eye contact with the eclipse. Old folks, children & those who are disease stricken would not be affected by this change.

Although an eclipse has a pretty powerful & robust effect on our lives. With the help of these religious remedies, we can easily go all the way & have a bite of the cherry.

We hope that this piece of information was enlightening as much as it was educational. Let the remedies show you the way to glide past all your troubles in life.

We at AstroSage wish you a very happy new year & we hope that this new year whacks out all your miseries to lay a path that maps out a plan that leaves you where you really want to be in life.