This year, we will be witnessing a Surya Grahan or a Solar Eclipse on two occasions, once on 26th of February and then on the 21st of August. Let us know more about what an eclipse is and how these Solar Eclipses will affect our daily life. Read on to acquaint yourself with these occurrences of immense astrological and scientific significance !

What Is A Grahan? 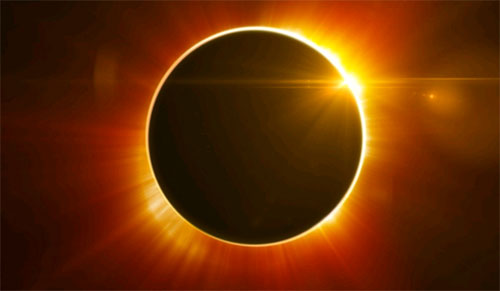 A Grahan or an eclipse is the event, when a stellar body hides light from one celestial body by passing between it and the observer, and at times, between the body and its illuminator.

In 2017, we are going to witness three eclipses in total. Two of them will be solar eclipses or Surya Grahan, while, one will be a lunar eclipse or a Chandra Grahan.

Let’s take a look at Surya Grahan from a scientific as well as indigenous perspective.

Surya Grahan occurs when the Moon comes in between the earth and the Sun. This occurrence hereby obscures the earth and its source of illumination, i.e. Sun. When Surya Grahan or solar eclipse takes place, the earth gets shadowed down by the intrusion of the Moon.

Surya Grahan or solar eclipse is a position of conjunction between the Sun and the Moon when the Moon partially or fully blocks the Sun. It takes place on a New Moon day. This tends the earth to have a dim or dark atmosphere around the sky.

Why Does Surya Grahan Occur?

The revolution of the Moon around the earth takes place at an interval of 29 and ½ days. Surya Grahan or solar eclipse occurs when the Moon comes in between the Sun and the Earth.

The condition of a solar eclipse takes place when the Sun gets in conjunction with the Moon on its path of revolving around the Earth. 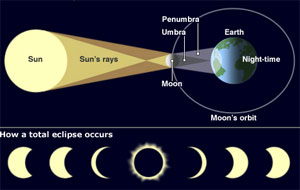 The Moon takes advantage of the Sun’s disc and blocks the sunlight to reach the earth’s surface. This causes the phenomenon of Surya Grahan or solar eclipse.

The solar eclipse is greatly feared, as it is believed to carry negative effects along with it. It is said that the inauspicious day of Grahan can block the bright moments of a person's life leading to negativity.

Since Surya Grahan is considered in such regards, there would definitely be reasons behind the assertion. Let's take a look at the legends of Surya Grahan or solar eclipse that makes the day worth mentioning.

According to the Hindu Text of Matsya Purana, Goddess Dhanvantari emerged out of the sea with a pot of Amrit or immortal drink in her hands. Since the Amrit was considered to bring immortality, it ignited a fight between the gods and the demons present there. 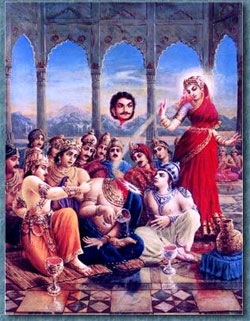 To pacify the environment, Lord Vishnu disguised himself as Mohini and managed to receive the pot of Amrit from Dhanvantari. He gave the pot to the Devas or gods and resisted the demons from being immortal.

One of the demons, Swarbhanu faked himself as a god and somehow tricked to take a sip of Amrit. His pretence did not last for long as he was sitting between the Lord Sun and Lord Moon who exposed his identity to Lord Vishnu.

This deed enraged Lord Vishnu as he cut the demon into two halves with his Sudarshana Chakra. Since then, the head part of the demon is known as Rahu and the tail end is known as Ketu.

Since, it was the Sun and the Moon that led to his exposure following his death, he is believed to swallow the Sun and the Moon whenever they come near to each other. Thus, the day of Grahan is also associated with revenge that is said to come out in the form of a negative energy.

Remedies of the Sun are also a part of the proceedings of Surya Grahan when the effects are pacified with the chanting of Surya Mantra. It is said that Surya Mantra coordinates with the inner powers and strengthen them.

Temples remain closed on the day of Grahan, although temples of Lord Shiva are remained open as Lord Shiva embodies the symbol of darkness. Idols of deities are cleansed when the Surya Grahan gets over. People prefer to end the Grahan by taking a bath which is referred to wash away all the evils and sins from their bodies. It is considered to be a favorable period to recite Mantras or Stotras such as Gayatri Mantra, Mrityunjay Mantra, etc.

In India, it is still believed that the Rahu-Ketu engulf the Sun on solar eclipse or Surya Grahan. Grahan is considered to be a carrier of bad fortune and affects a person's life, negatively. To minimise its ill effects, holy Mantras are chanted that is expected to bring positive energy in an individual's life. Here's one of the Mantras:

What Is Surya Grahan Sutak?

Surya Grahan Sutak is an inauspicious period of the Grahan, when people do not step into important tasks. The belief state that an auspicious task may lead to failure if carried out during the Sutak period.

Sutak is also known as Ashouch. During Ashouch or Sutak, the contamination of the environment takes place and hereby it is advisable for the people to take protective measures during Grahan Sutak.

Surya Grahan is mostly considered for its negative impacts while there's no reason to panic during Grahan. We bring you some of the precautions that are needed to be taken during Surya Grahan:

Pregnant women are the ones who are believed to be more delicate towards the ill-effects of Grahan.

Let's take a look at the precautions that are to be taken by the pregnant women to ensure their safety and the safety of their future offspring(s):

Want to know the measure pregnant ladies need to keep in mind during Grahan? Click here: Precautions During Surya Grahan For Pregnant Women

Although, Surya Grahan is believed to carry major negative impacts, there are cautious measures for protecting yourselves. Do not panic! It’s the time to react tactfully and neutralize Rahu’s impact on your lives.

To know more about the Surya Puja, in order to pacify the effects of Sun, take a look at: Remedies For Sun.

We hope that this article will help you in treating Surya Grahan 2017 with a more cautious attitude.

AstroSage wishes you luck for the year 2017!