Do you know that Ganesh Chaturthi comes every month? Yes, it does and that too twice. Read further to know more about the 2 Ganesh Chaturthi dates in each month of 2017. Vighnaharta is all set to take away your pain and sufferings. 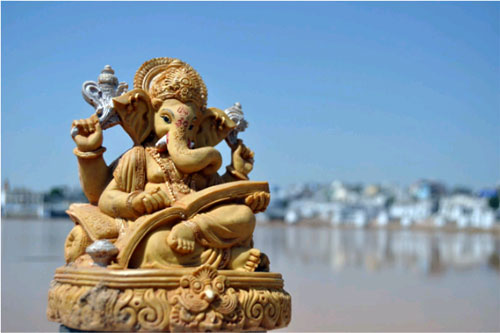 On each Chaturthi, devotees keep fast to fetch the blessings of Lord Ganesha. Let's now see how you can be benefited if kept fast on Sankashti Chaturthi.

Do you know that before worshiping Lord Ganesh before making new beginnings is highly fruitful? Want to know why? Why is God Ganesha considered the foremost among all Gods?

Lord Ganesha devotees keep fast on the occasion of Sankashti Chaturthi (also known as Angarika Chaturthi). The fast of Ganesh Chaturthi is kept from the time of sunrise to moonrise. This fast comes to an end after watching of the Moon followed by the Aarti (song sung in praise of the deity) of Lord Ganesha.

Lord Ganesha, the most respected Lord of intellect, is considered as the destroyer of all the problems, troubles and obstacles in the life of a person. Therefore, it is believed that a particular person can get freed from all the obstacles by the way of performing this fast.

Let us now discuss Vinayaka Chaturthi and its dates in 2017.

Vinayaki Chaturthi is also recognized as 'Varad Vinayaka Chaturthi'. The word Varad means 'boon'. Those who keep fast on this auspicious day are showered with power and intelligence by the Almighty. These are the two very important qualities for a person known by everyone. A person who manages well with these virtues can actually have all his/her deepest desires in life and can also accomplish all his undone tasks.

Observing fast for Vinayaka Chaturthi completely depends on the sunrise and sunset timings. This Chaturthi is observed at the time when Chaturthi (fourth day) prevails during the mid time of the day. Therefore, the fast (Vrat) on Vinayaka Chaturthi might be kept on Tritiya (one day before Chaturthi)..

On the occasion of Vinayaka Chaturthi, devotees observe fast for the entire day. Some of the devotees who keep strict fast, also observe fast for the night time and break it the next morning. This fast (Vrat) is mainly observed by the Brahmin communities of southern and western parts of India. On the the event of Vinayaki Chaturthi, the people who observe fast can consume just fruits and vegetables. Vinayaki Chaturthi is considered to be the most auspicious of all fasts.

It is believed that a person should not see the Moon on Ganesh Chaturthi. Having a look at the Moon on the day of Ganesh Chaturthi gives birth to Mithya Kalank or Mithya Dosham. Because of the effect of this Dosha or Kalank (negative effect), the concerned person is blamed with the false accusation of stealing something. In accordance with the starting and ending time of Chaturthi Tithi (the fourth day of a fortnight), having a look at the Moon might be barred for 2 successive days. According to the rules of Hindu religion, Moon should not be seen for the duration of Chaturthi Tithi. Adding more to this point, viewing of Moon should be avoided even if Chaturthi Tithi comes to an end before moonset.

Lord Ganesha is here to answer all your questions and take away all your problems.