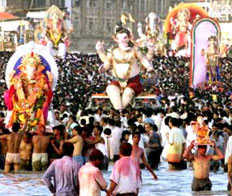 Ganesh Chaturthi, celebrated on the birthday of the Lord Ganesha, is one of the most beautiful festivals of the country. People tend to forget all their sorrows and get hypnotized by the charm of Lord Ganesha during this period of time. Be a part of the festival of Ganesha Chaturthi and witness the divine peace.

Mythology of the festival Ganesh Chaturthi

Lord Ganesha is the son of Goddess Parvati and Lord Shiva. As per the mythology Ganesh was created by the Goddess Parvati herself by her Sandalwood paste to safeguard her. Lord Ganesha was asked by Parvati to stand out at the door in order to guard her while she bathed. Child Ganesha could not identify Lord Shiva and didn't allow him to enter the home when he returned back. This made Lord Shiva extremely angry and he cut off the head of the child. But after the truth came to ears of the Lord Shiva, he realized his mistake immediately. At this he granted an elephant head to his son in no time. Since that day the festival of Ganesh Chaturthi is being celebrated enthusiastically. It is the same day when Lord Ganesha was announced as superior to all the gods. Lord Ganesh is widely worshiped in Hindu culture as the lord of wisdom and has been honored with the name of "vighnharta" as it is believed that he removes all the obstacles coming in the way of success.

The people are very much dedicated towards their God and worship him with complete purity and transparency of heart. They follow all the rituals related to the festival of Ganesh Chaturthi with an unshakable faith. People are prohibited to look at the moon on the day of Ganesh Chaturthi, as according to the ancient legend, once Lord Ganesh got disbalanced while travelling on his mouse. Moon started laughing at him. Humiliated by such an insult Lord Ganesha cursed moon. And since then looking at moon on the festival of Ganesh Chaturthi is prohibited for the people. It is an indication for the people who do good deeds that they should not form any bond with the people who have no faith in god and are evil in nature.

The 10 days long celebration which is fondly known as "Ganesh Utsav" commence with the installation of beautiful Ganpati idol at homes. Apart from home, there are also arrangements of big "pandals" to install the idol at some places to celebrate this auspicious event collectively. It is said that during the time period of Ganesh Utsav Lord Ganesha gifts his presence on earth to his devotees. The first day of the festival Ganesh Chaturthi on which the idol is brought to the home or the pandals is the Shukla Chaturthi. The idols of the Ganesha are beautifully decorated with different kind of colors and flowers. Ganesh Chaturthi Pooja is an essential part of the festival. The priests are supposed to worship the Ganpati's holy idol to invoke life in it. After that the devotees invest almost all their time in the service of God. They offer different kind of offerings during the Pooja of Ganesh Chaturthi all 10 days. Those offerings include the favorite eatables of the Lord Ganesha with other things such as Modakas, Jaggery, Coconut, Durva blades of grass and red flowers. In the Ganesh Chaturthi pooja devotees chants different kind of mantras that have some significance of their own. The 10th day of the Utsav is Ananta Chaturdashi and on the 11th day the idols of the Ganesha is taken to the river by the devotees to bid a farewell to their dear Lord. This is popularly known as the "Ganpati Visarjan". People in large number come out on streets to take their idols to its destination accompanied by dancing and singing songs dedicated to Ganpati. It is a common belief that Ganpati takes away all the misfortunes of the households with himself on his journey back to Kailash.