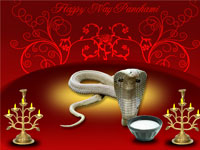 The date for Nag Panchami in 2017 is July 27. We all must have heard that God is present in each of His creations. But, what if the same applies to animals as well? Yes, this is true, as snakes are honored with special devotion during Nag Panchami. Read to know why it is done so…

What Is Naag Panchami?

Indians worship snakes in the form of supreme deities. Nag Panchami is one such festival, where we follow traditional rituals to worship snakes. Aren’t you excited to know about Naag Panchami? There’s nothing to be impatient, as through this article you will know everything about the festival of Nag Panchami. So, let’s proceed...

Indian women observe the day of Nagula Chavithi in order to bring happiness in their children’s lives; Nagula Chavithi is believed to provide protection to children. Naga Puja is also performed by the devotees on Nagula Chavithi. The next day is popular as Nag Panchami.

The festival of Naga Panchami takes place in Shravan Maas; it is celebrated during Shukla Paksha. Since, the festival is dedicated to snakes, we must know that Patal Lok is believed to be the abode of Nagas (snakes). Some of the regional names of Nag Panchami are - Bhratru Panchami, Bishari Puja, Naga Vardhini Panchami, etc.

Let’s know the date and timing for observing Naga Chaturthi, Naag Panchami according to Hindu Calendar.

Hopefully, the Nag Panchami 2017 date and Puja Muhurat timing will help you to consider the festival of Naag Panchami with a meticulous approach.

Now, as you know when to celebrate Nag Panchami in 2017, you might like to know that why Nagpanchami is observed. We will now discuss the legends of Nag Panchami, that makes the festival significant for us.

Why To Celebrate Nag Panchami?

Before knowing the different legends associated with Naag Panchami, let’s first discuss the history of Naag Panchami and when it started. It is believed that long before, the Aryans clan arrived in our country, when Nagas resided in India. If we go back to the historical evidences, snake deities were venerated among Nagas. However, soon this tradition came up into Hinduism and gained prominence. In the following part, we will discuss the story that signifies the role of snakes as Hindu deities. 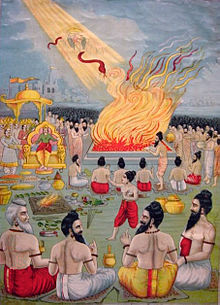 According to Mahabharata derivations, Janamejaya (son of King Parikshit, Kuru dynasty) was performing a ritual to avenge his father’s death known as Sarpa Satra (snake sacrifice). Since, Parikshit died of a snake bite by the King of snakes, Taksaka, Janamejaya was determined to kill Taksaka.

Since, the fireplace was created by a number of learned men, it was extremely powerful. It attracted each and every snake into it; however, the main culprit, Taksaka escaped the magnetizing power of Sarpa Satra and went to Indra’s netherworld. Hence, to attract Taksaka into the Agni Kund, the tempo of Mantra recital was increased. Such was the magic of the Mantras that even Indra could not escape it and accompanied Taksaka to the Agni Kund.

The gods became scared of the consequence, and hence, pleaded Mansa Devi (goddess of snakes) to intervene. On their constant requests, Manasa Devi sent her son, Ashtika to the place of the event. However, to stop Janamejaya was not an easy task, Ashtika was finally able to impress him with his knowledgeable personality. Hence, it convinced Janamejaya to stop Sarpa Satra. This spared the life of Indra, Taksaka, and his other serpent sect.

According to Hindu calendar, this was the day of Navi Vardhini Panchami. Since then, Naag Panchami is observed as a tribute to the Nagas.

It is also believed that the occurrence between Krishna and Kaliya snake is another reason to celebrate the festival of Naag Panchami. Once, Krishna was playing with the cowboys, when the ball got intertwined in the branch of a high tree. No one, but Lord Krishna, took the initiative to fetch the ball. But, the path was not easy, as one had to place himself above the Yamuna river, which was the residing place for Kaliya snake.

Krishna slipped off the tree, while climbing up. This made him fall in the Yamuna, and suddenly, Kaliya emerged out. But, Krishna was in no mood to give up. He fought the snake valiantly, and soon, captured a commanding position over Kaliya snake.

Kaliya came to know about Krishna’s extraordinary powers, as the event occurred. Kaliya pleaded Lord Krishna to let it go. Kaliya was left freed by Krishna, as it promised not to harass anyone again. Since then, this is believed to be another reason for the occurrence of Nag Panchami.

How To Celebrate Nag Panchami?

Observances - Cleaning of house, worship of snakes, puja, holy offerings of food and chanting of mantras.

A snake is crafted out of cow dung on the day of Nag Panchami, and placed at the doorstep. The snake is therefore, worshiped as a deity on Nag Panchami. Milk, Kusha grass, sandalwood, Akshat (holy grains of rice) are offered to the snake. The snake deity is bathed with milk, which is believed to free oneself from sins.

In regions like Assam, Orissa, West Bengal, devotees worship Maa Manasa on Naag Panchami. Sheshnag is worshiped at places like Maharashtra, Andhra Pradesh, etc. Nag Panchami is celebrated in different mannerisms in different regions of the country; however, the overall pattern of celebration remains the same.

A special Puja is performed for Snake God, in which the snake is bathed with Panchamrit (a mixture of milk, yogurt, sugar, honey, and butter). Besides this proceeding, Aarti is performed to invoke the blessings of snake deity.

Mantras are chanted throughout the Nag Panchami offerings. Please take a look at the Mantra that is recited to please the Snake God.

A Kala Sarp Nivaran Puja is held at temples on the day of Naag Panchami. Kaal Sarpa Puja is an important ritual on this day, as it acts as a cure for the people affected with Kala Sarpa Dosha. As per Skanda Purana evidences, worshiping snakes of Chamatkarpur will will lead in fulfilment of your wishes.

In ancient times, people used to mix ochre with cow dung; the mixture was later applied on the walls of houses. In addition to this, one used to tie seven knots in a single rope to give it the form of a snake.

The natives who are affected by Kal Sarpa Dosha have to work harder than normal people to attain success in life. Since, there are twelve houses in birth-chart, so Kala Sarpa Dosha can be formed in twelve different ways. This condition is generally considered to be a troublesome and problematic one for any person. Nag Panchami, celebrated in Shravan month, is believed to be the most auspicious day to pacify the effects of Kala Sarp Dosha. According to ancient texts, Nag Devta is the god of Panchami (fifth lunar day). On this day, worshiping and praying to Lord of snakes is considered to be very good and brings blissful results.

This day is meant to be holy to venerate snakes. As per certain scientific researches, snakes don’t drink milk. Therefore, you should never offer them milk. Snakes feed on rats and mices at plough fields and save the crops from being destructed by them. Hence, it is our duty to protect them.

The next day is observed as Nag Sashti. The festival of Nag Sashti takes place on the sixth day of the month. Since, Nag Sashti is also associated with Nag deity, the same worshiping rituals are carried out on this day.

This time, snakes will be once again be given a godly place. But remember to worship the Snake God out of devotion, where the notion of fear is eliminated. The snakes are much more than just being the carriers of venom. Treat the snakes as the carrier of eternal blessings, and get blessed by them.

Celebrate this Naag Panchami by sending Nag Panchami SMS to your close friends and relatives. Make sure, you observe Naag Panchami with greater enthusiasm. Since, it is always said that “God resides in each of His creations”, snakes are the perfect example of this phrase. Get blessed by Snake God this Naag Panchami.

AstroSage wishes you all a divine Nag Panchami..!