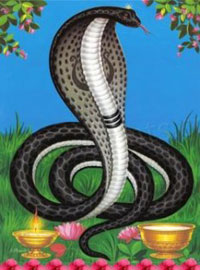 The association of snakes with the Hindu is not a new thing. There are many mythological stories that state that snakes have always been connected to the Hindu religion. Lord Shiva himself has a snake that can always be seen around his neck and Lord Vishnu has snake too named as 'Sheshnag'. Therefore it is clear that there is a special significance in worshipping snake on the day of Nag Panchami.

On the day of Nag Panchmi people will devotedly involve themselves in the service of snakes. Many region witness people worshipping the live snakes, whereas in most of the places people worship the idols of snakes. The rituals and celebration for the Nag Panchami will start as soon as the day of Nag Panchami will arrive. Women will wake up early in the morning and wear clean clothes and will reach their destination where they offer prayers. The places meant for worshipping snakes includes the nearest Ant hill or any temple that is dedicated to snakes. Women then worship the snakes and also offer milk in respect.

Women innocently ask Lord snake to bless the life of their husband, brothers and family as well. Some people also observe fast on the day before Nag Panchami and that day has been named as Nag Chaturthi.

The most important part of the rituals performed during the nag panchami festival is the nag panchmi puja. The nag panchami puja is a pious medium of celebrating Nag Panchmi with never ending faith and devotion. The essence of Nag Panchami Puja makes the festival of Nag panchami even more pure and beautiful. People all over the country send their blessing to loved ones through the Nag Panchami SMS.

Nag Panchami is a major occasion for the Hindus of Nepal. They involve themselves in the celebrations of Nag Panchami. Nag Panchami in 2017 will also be celebrated by people on a great scale. People apart from worshipping perform some religious dance in the honor of the festival Nag Panchami.

While celebrating Nag Panchami, it is a good idea to know about the legend behind this festival. The association and role of snakes in the Hindu religion can't be denied or ignored. With the prayers offered to the snakes, people also take a step forward in promising that they will face their inner fears.

The Story of Nag Panchami is very interesting and is related to the Lord Krishna. The Nag Panchami story signifies the victory of good in a very simple manner. Once, there was a nag named Kalia during the era of Lord Krishna. His evil deeds were increasing day by day. His terror was not allowing people to have a life of their choice. To end this tyranny Lord Krishna came up and killed the Nag with his brave actions. The day on which nag was killed is celebrated as Nag Panchami. Nag Panchami is an ancient hindu festival and its glory will keep on glowing in the coming time too.

There are many beliefs related to Nag Panchami. People also believe that worshipping a Nag on this day will keep them and their family safe from all the snakes forever.

Keep the faith alive in your hearth and perform the Nag Panchami puja. It will bring immense happiness and will also ensure the safety of your loved ones.