Rahu, the North node of the Moon, is also considered a planet in Vedic Astrology. Astronomically it is not a planet, however, due to its major impact on human’s life, it is considered as a planet in astrology. The tail of dragon, Ketu, is known as south node of the planet Moon. They don’t exist as heavenly bodies with an observable body, shape or mass like Sun, Moon and other planets.

Rahu is a planet which creates illusion and has desires of materialistic gains. In present scenario, Rahu provides fame and also represents IT sectors. It has a cravy nature and wants to consume each materialistic thing of the world. It never gets satisfied with what he has. He always seeks for a different opportunity. It takes Rahu up to 18 months to enter from one zodiac sign to another. The Mahadasha period of Rahu is also 18 years. 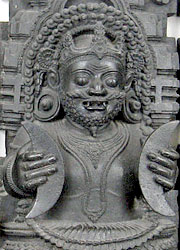 In Hinduism, Rahu & Ketu are also known as “Chayagrahas” or shadowy planets. It possesses no mass, substance or shape. They are the celestial points on the Zodiac with regulated movement and orbit. At the same point, one must analyse the conditions of planet Sun and Moon in horoscope for predictions.

As per classical texts, Lord Vishnu served nectar to all Gods and poison to all Demons. By that way, Lord was fooling all demons at the time of “Samudra Manthan”. However, one of the demons, named Swarbhanu, noticed it and sat in the row of Gods and managed to get a few drops of nectar or Amrit. In the meantime, Sun and Moon saw that activity and gave signal to Lord Vishnu, who beheaded the demon. But unfortunately, by that time, he was immortalized. From that point of time, the head of the body of demon is called as “Rahu” and torso is called as “Ketu”.

The mystery planet Rahu is considered bodiless, hence he doesn’t know how much he wants something. He remains unsatisfied due to his bodiless head. He has the passion and wants more. Rahu creates obsession within the person’s mind. He does not have a physical body, which is why he is called the shadow planet.

Rahu is considered malefic in astrology due to its origin related to demons and also because he swallows Sun, hence causing Solar Eclipse. Rahu is also named as North node of the Moon. Rahu and Ketu are the ecliptic points where the plane of Moon’s orbit intersects the plane of Sun’s orbit. Zodiac point where a planet crosses from south to north Latitude is called North Node. North node is called the Ascending Node, and South Node is called the Descending Node.

In Western Astrology, Rahu is known as the head of Dragon. Caput is also another name of Rahu given in western astrology. According to Western people, rahu is considered benefic whereas Ketu is malefic. They don’t consider these planets while analysing birth chart to give predictions on one’s life.

Rahu has no lordship over any house or rashi in horoscope. Only seven physically existing planets rule over the houses and rashis. Few astrologers believe that nodes also occupy houses and signs. We should keep in mind while analysing the horoscope that these nodes are important as they react on the basis of the house and signs in which they sit and conjoined with any planet in that particular house or sign. Though Rahu doesn’t own any house so it acts as a lord of that sign only. In case of conjunction, they provide results of the planet which aspects them. Rahu rules over Ardra, Swati and Satabhisha Nakshatras. However, some believe that Rahu gets exalted in Taurus or Gemini and gets debilitated in Scorpio or Sagittarius. If Rahu occupies the beneficial houses in the horoscope, then it will give good results.

What does Rahu signify in Vedic Astrology?

Rahu indicates the paternal grandfather. It doesn’t rule over any zodiac sign. According to Vedic Astrology, planet Rahu indicates one born in low caste, one who may have been involved with girls, one whose thoughts and actions will be evil, one will resort to outcaste and low-born. One who is dissatisfied, likes residences facing in south direction, fond of travelling, stay outside or in a big jungle, finds pleasure in uttering falsehood, continues to speak untruth, one who doesn’t have courage and look downwards while walking and talking with others. Gas troubles and sharp acute pain are denoted by nodes. Buddhist, snake catchers, ass, ram, wolf, camel, serpent, poisonous insects, a dark place, bug, insects, owl etc. belong to the nodes.

To live in a rented house, enjoy life at others expense, use others vehicles, have an office car, take one in adoption, danger to the offspring, pilgrimage, ill health to the native and defect to the children and in vision are judged from the position of nodes in the horoscope.

How does Rahu act in all 12 houses?

Let’s see below how rahu acts for all 12 houses if it occupies the different houses in astrology:

Rahu in various houses according to Vedic Astrology

Rahu in various houses according to Lal Kitab