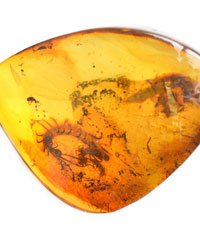 Amber, the beautiful warm toned stone is not really a gemstone, but a resin that's found in trees. Formed through the fossilisation of tree resin, Amber often contains animal or insect inclusions. The formation of this could be traced back to the Tertiary period, i.e. a 50 million years ago. The Amber gemstone is sourced from the Pinus Succinifera tree, it comes from a soft and very sticky resin. It is an example of organically occurring gemstone, just like pearl, coral, and ivory.

Amber has warm and mystical tones to it, giving it more beauty. It's also been accorded as having magical properties, due to it being an old stone that entails the wisdom and knowledge of the lands known only to it.

The most common colours of an Amber stone are a variety of tropical hued shades. Warm hues like orange, yellow, sunny browns, ochre, only give Amber all the more reasons to be called the stone of the Sun.

Also found are the Red Amber, Blue Amber, and Green Amber, which add more beauty to the stone's name. However, just like most stones, Amber stone is also color treated and can be produced in almost any color. It also finds its use in jewellery pieces and stunning artworks. Home decor industry uses it as an Feng Shui item too! Adding it your walls and shelves and home decor pieces is a fun and cool way of bringing the warmth and healing magical powers of Amber gemstone in your house.

The benefits of wearing an Amber gemstone are innumerable. And to top it all, you won't be able to find any drawbacks of wearing it. Few good things that might a ring in your life after wearing the Amber stone are listed below:

There are certain gemstones which do not go well with the Horoscope of the wearer or with the energy that be emits, making it difficult for him to wear the stone. Instead of proving an aid to the list of the woes, some stones tend to do the opposite. The major drawback of wearing an Amber Gemstone are as such none, but one can never be sure. Our bodies have a vibe about them; we emit energy and sometimes the energy of the stone that we wear, clashes with that of the stone. The creates tension and a pull-in push-back sort of a relationship. This could sometime be mellow, or with a more powerful stone, something to dread.

However, in the case of Amber stone there has been no such complaints. Lacking the crystal structure, Amber is not exactly a gemstone but a hardened resin of a tree. This could be the answer to so many queries raised over the web asking, Is Amber a gemstone? Having mystical, magical, healing properties the stone is known for shooing away the negativity from one's life.

There are basically numerous ways one can wear the Amber Gemstone. Since, it's a healing stone with no drawbacks or negative implications, it can be worn in any size. The stone is also made in a rosary and in teethers for the babies when they are teething. Amber gemstone also has proven it's mettle in providing successful aid for joint pains and problems that strike the old. Being such a warm and versatile stone, it can be worn as a jewelry piece as well. The stone is often worn by lovers to bring back the lost passion in their lives. The size of the Amber stone depends on you and what you deem the best for you.

The Amber stone is known to bring about multiple benefits in the life of it's wearer. Since the stone is a beneficial one that doesn't have any negative vibes to it, it can be worn by anyone, irrespective of the Horoscope or the zodiac sign. The factors that are usually taken care of while prescribing anyone any stone are nonfunctional in this particular case. Amber can be used as a piece of jewellery, a decorative item, or as a talisman for curing ailments. It's also a love charm for those who require romance and passion to increase in their lives. Since, it's multifunctional, Amber stone can be work, kept, or adored by anyone irrespective of their zodiac signs.

(Note: We strongly recommend our users to consult with an expert astrologer before wearing any stone.)

Wearing process Since the Amber is a pretty beneficial stone that yields magical healing properties, it is somber for anyone to wear it. Gemstones such as sapphire, ruby, or pearl all are related to specific planets which are potent of influencing these planets in the birth chart of the wearer, but since Amber is a generally beneficial stone, it creates no such hindrance in anyone's birth chart or future per say. The process for wearing any gemstone remains the same. You ought to keep the stone under your pillow before wearing it. This could be done a night prior to the day when you've thought about wearing it. Although, Amber has never produced any negative energy or vibes in any living space or in the life of any wearer, it is still advisable that you do a little test before wearing it, since certain stones tend to react to certain chakras. How to identify a real Amber Stone

When buying and wearing a gemstone, it is important that you know it's authentic and a genuine product. It takes knowledge, and just a hint of sense to find out the gem from all the stones. What must be taken into consideration while buying a gemstone could be found on different platforms, but it takes much more than that to figure out the real thing. AstroSage advises you to always be sure of the purity, authenticity, and the validity of the gemstone before buying it.

The colour of the stone plays a major role in its identifying process. Occurring mostly in the warm tones of yellows, oranges, and browns, Amber can be found in many different shades of tropical too. The golden, almost yellow Amber is the most commonly found amongst these. Whitish yellow to pale lemon, to brown and black, the Amber stone has touched the hues of warm altogether. A rare blue Amber is also found in the Dominican Republic. Following suit, there's also a green Amber, and a red colored Amber too, which sometimes gets to be referred as the 'cherry amber'.

Since Amber is not a gemstone, but a tree resin the clarity of the stone ranges from being completely opaque to translucent, to transparent. The Amber found has air pockets and several tree or insects inclusions in it. That is the most important factor that affects the clarity and lustre of the stone. The air bubbles present in the stone give it a different body that the other gemstones. The stones which have lots of these miniscule bubbles is known by the name, 'bony amber'. However, the amber stone that's most desirable is the one which is clearer than the cloudy ones. The most valuable Amber is known to be the ones that contain plant, pyrite, or insect inclusions in it.

Today, the cut and shape of the gemstone depends entirely on the demand of the user. Amber is a soft stone, so it's pretty easy to carve it or shape it the way you want. Mostly it is being cut in the en cabochon, because it's rarely faceted. Since the stone is widely being used in the ornamental and jewellery industry, the stone gets shaped into many different and beautiful cuts. The most popular Amber stones would be found in round and oval shaped and other would be in teardrop shapes or stars. Other shapes include hexagons, pentagon's, heart shaped and many more as per the demand of the stone.

Amber stone is not generally tempered with and gets to be on its own. But sometimes, the stone due to it being too soft gets pressed into two or more smaller stones. This hardens the stone and provides it durability and stability. These smaller stones are either joined by oil, heat, or pressure. The stones formed through this method are referred to as either, 'amberoid', or 'pressed amber'. To enhance to clarity of the said stone, it is often infused in an oil bath. Copal and Kauri gum are often used as an imitation for the Amber Gemstone. The most common, Baltic Amber stone is often artificially enhanced to produce more brighter and brilliant hues.

In the market that we see today, most of the products are false, or either treated. And in the case of the gemstones, this is a sad reality. There are lot many chemically and lab treated gemstones available in the market that are a beauty to look at, but they negate all the chances of gaining something from the stone. With technology getting better day by day, the sellers and buyers have both become more aware of the goods that they sell and purchase. A high price doesn't guarantee that the product would be genuine, so when buying a gemstone one needs to be extra cautious. With Kitts tips and ways one can get through the bogus gemstones and onto the real deal pretty quickly. The verification or a certification could only help you so much, so it'll be in the best interest of all to educate themselves over the stones and how to identify the real one. Getting a Lab Certificate sure calms the soul, but keeping a few tricks up the sleeve won't harm you while looking to buy a gemstone.

Buying a real gemstone could be a nightmare, but with genuine certification it can be a great if fresh air for you. The verification from a Lab that AstroSage provides lets the buyer know what he's purchasing, seeing and getting genuine goods sent. We at AstroSage, provide authenticity that has no match. We provide ISO 9001-2008 certified gemstones with a brief introduction of the weight, shape, color, cut, and the chemical combination of the stone. We negate any risk of falsity and provide you with genuine real gemstone that could pass any test, at the same time being light a on your pocket.