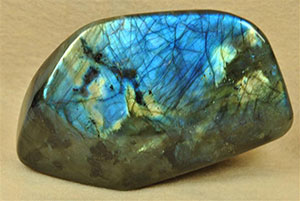 The name Labradorite has come into existence from the place named Labrador in Canada. The stone Labradorite is also known with another name as Labradore. The stone is of a lovely blue color which displays its labradorescence quality with a rainbow of colorful light waves which play across cleavage planes within the stone. Labradorites are not only seen in blue but you can even find them in a varied range of colors like black with blue/dark grey, yellow sheen and/or green. At times, the gemstone Labradorite stone is also known as Spectrolite. The Crystal of Labradorite is profoundly known to be a stone having magical powers, which indeed helps one gain the psychic and mystic powers for their inner awakening. If a person wants to bring change or wants to transform the way of living their life then they should opt for wearing a labradorite stone as it has deep resonating qualities. The powerful vibrations emitting from the Labradorite stone aid in protecting the wearer from negativity encircling around them. The positive energy and the effects of Labradorite gemstone can be easily sighted by the wearer as it shows its results early.

Labradorite healing stone is an amalgamation of a part of the feldspar group and a part of Albite group. This mixture of properties of all three translucent stones makes the Labradorite a magic stone. The stone is a type of Feldspar, that projects strong iridescence while it is viewed from more than one angle. Labradorite gemstone also known to be the sister of the Moonstone, links it's aspects with the Moonstone granting the wearer with inner knowledge, psychic perception and also enhances their intuitive powers.

The Labradorite gemstone provides with many advantages among which some are listed below:

In some cases the energy that is emitted from the stone can prove to be harmful or may not go well with certain horoscopes making it difficult for the wearer to adorn the stone. Sometimes it has been observed that the clairvoyance giving gemstone can also do the opposite. There are no drawbacks as such associated with Labradorites but one can't be sure of any of it. As every gemstone emits an energy even our body does the same, and thus sometimes in this process these two energies colloid with one another creating unpredictable impacts showcasing a relation of attraction and repulsion between them. This could sometimes be soothing and positive while it could also bring harsh results.

However, by far there have been no such complaints regarding the gemstone Labradorite are registered. The stone has mystical, magical and healing properties which helps the wearer to cleanse, purify and rejuvenate his body, mind and soul.

Different measures are needed to be followed before finally considering the size and weight of the gemstone. The Labradorite gemstone is the one that is suggested to be worn during Venus phase. To get the correct size and weight of the gemstone you have to consider two important aspects, the first is to consult a well versed astrologer who can assist you in getting the exact size suitable for you and the other option is to calculate the suitable size by dividing the body weight of the person who wishes to wear the gemstone by 10 and the remaining answer will be the correct size to be worn to enjoy the benefits. For example a human weighing 60 kgs should wear a 6 carat gemstone.

The Labradorite stone is known to bring multiple benefits in the person's life who wishes to wear the stone. The gemstone is proven to be beneficial to many and as it has the potentiality to eradicate the negative energies it can be worn by anyone, irrespective of the Horoscope or the Zodiac Sign. All the factors that are usually taken care are nonfunctional in this case while prescribing any stone to anyone. The gemstone Labradorite can be worn as a piece of jewellery and can be used in form of a crystal or also as a talisman for curing ailments. The stone is recognized as multifunctional hence the stone Labradorite can be kept, worn or adored by anyone of the wearer irrespective of their zodiac signs.

The chemical name for Labradorite gemstone is Sodium calcium aluminium silicate and its structural formula is NaAlSi3O8 to CaAl2Si2O8.

The Labradorite measures a hardness range of 6 - 6.5 on the Mohs scale and the relative refractive index of the stone ranges between 1.560 - 1.572. The gemstone represents a triclinic crystal structure and its specific gravity or density ranges from 2.69 - 2.72. The gemstones are also available in other different colors like the iridescent violet, green, blue, yellow and orange.

According to the Vedic Astrology, the Labradorite is the gemstone that is considered to be the most powerful among the "protector" minerals. The malefic effects of this clairvoyant stone can prove to be very awful. Hence, to nullify the negative effects Labradorite is recommended to be worn.

One should always keep in mind to wear the accurate authentic recommended size of the gemstone to gain optimum results from it, as different gemstones represent different planets and their effects.

The wearing process of the Labradorite is as follows:

How to identify a real Labradorite Stone

The gemstone often exhibits a brilliant play of colors or a whole spectrum of colors, which is known as labradorescence effect or schiller effect iridescence indicating the stone is of a high value. Labradorescence reflects blue or green sheen whereas Adularescence reflects white or bluish light when the stone is rotated. This phenomenon can sometimes falsely lead Labradorite to be identified as Moonstone. The gemstone Labradorite because of its characteristic play of colors makes the stone unique and distinctive, hence have no substitutes for it, so don't get fooled. Don't get cheated by the dealers as they try to sell the lower quality treated Labradorite gemstones at a higher rate. So, you have to be extra cautious while buying these gemstones from an online source, thus we at AstroSage provide you with utmost quality and genuinely authentic lab certified gemstones to serve you the best in market.

Always remember to identify the good quality stones by its Cut, Clarity and Color. Due to the internal fractures in the mineral and metallic lustre, the Labradorite gemstones display a beautiful iridescent play of colors.

According to Astrology, the quality of the Labradorite gemstones depends mainly on the color play and not on the cuts or facets; these aspects only have ornamental significance.

The first and foremost thing to always tuck in your mind while buying gemstones is that one should be more cautious and stringent instead of being liberal when going for a purchase, because with the rapid change in time there have been a rise in the availability of many false products. The dealers or the sellers might try to cheat the customers by selling them low quality treated gemstones at a higher rate. So one has to be extremely careful while buying gemstones because if you end up buying a fake gemstone then it won't yield you the desired results and it might also affect the person adorning it with adversaries. Many people fall for an assumption that the higher the price the higher the authenticity of the gemstone will be, but that is completely irrelevant. There is a wide range of gemstones available at different prices in the market but only a lab certification can prove the authenticity of the gemstones. Hence the people who choose to buy gemstones should make sure that the particular gemstone you are interested to invest has a lab certification to confirm its genuineness and usefulness. There are also easy and simple methods that anyone can follow to test the authenticity of certain gemstones. Always try to make prudent decisions, avoid barging into false plays and make a priority to go for that extra mile to attain the original gemstone.

AstroSage is a platform that can provide its customers with utmost authentic gemstones that every customer wishes to have. We at AstroSage provide our consumers with a genuine lab certification to validate the potency of the gemstones. Now a day's most of the gemstones are sold along with a lab certificate attached with it to let the buyers know the quality of the gemstone they are opting to purchase. The one most important thing that every person who wishes to buy a good quality gemstone should practice is that they should always go for a reputed and trusted seller rather than going for an unknown one. The certificate that we provide is ISO 9001-2008 certified and gives a brief description of the weight, shape, color, cut and chemical combination of the gemstone. It's always a good bargain to procure a gemstone from AstroSage as we sell our gemstones at an affordable price than others.