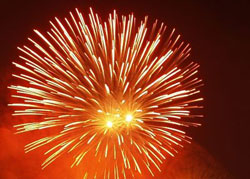 Diwali date for the year 2017 is October 19 which is Thursday. Diwali is India's most popular festival. Diwali is a festival that is enjoyed by people of all ages in different ways. Like all the years, Diwali in 2017 will also be celebrated in all parts of the country and in many parts of the world too. Bright lights fill the streets and not even a single trace of darkness can be seen during the festival of Diwali. The brightness is not only because of the electric lights but also because of the Diyas and candles.

Diwali, a five day long festival, attracts people from all over the world. Many people feel privileged in being a part of the celebration of this great festival. Diwali is meant to be celebrated to commemorate good deeds and removing the darkness from all over. The first day of festival is Dhanteras followed by Chhoti Diwali next day. Then the third day is Diwali itself followed by Govardhan and Bhai Dooj till the next two days respectively. All these festivals are fascinating in their ways and they combine together to form the most awaited festive seasons of the year. The magic of Diwali is such that the people enjoy for over a week and keep all their worries aside for time being.

While celebrating Diwali, it is a good idea to know the legends associated with it. Hindu culture is so rich in religious events of ancient time. One such great event is the reason behind the celebrations of Diwali. In Treta Yuga, Lord Vishnu was born as Lord Rama to kill the demon Ravana. Lord Rama along with his wife Sita and brother Lakshmana was ordered to live in woods for about 14 years. During this course of time, Demon Ravana who was the king of Lanka kidnapped Maa Sita. Therefore, Lord Rama killed the demon to rescue her wife and end the domination of Raavan. Lord Rama and his consort were deeply loved by the people of their kingdom Ayodhya. So, after their victory and completion of 14 years in the woods, they were welcomed heartily in Ayodhya. People lighted numerous lamps with the belief that the darkness is eradicated with the arrival of Lord and enjoyed the return of their Lord Rama. Since that day, Diwali is celebrated with same fervor and faith by Hindus.

Diwali is not a festival to be celebrated alone or inside the house. But, Diwali demands people to reunite and celebrate the day with the loved ones. After worshipping Lord Ganesha, Goddess Laxmi and Saraswati in accordance to the Diwali Muhurat, people open their hearts and distribute sweets and gifts to one and all. All the things that are bought during the festival of Diwali such as jewellery, utensils and crackers are worshipped along with the Almighty. Many diyas and candles are lit to remove the darkness from all over completely leaving the home shining brightly.

The decorated homes look so beautiful that they leave everyone spellbound. Not only streets but even the sky is filled with brightness of different fire crackers cracking every moment. Some people also decorate their house with unique designs of Rangoli especially at the entrance of their home.

All the things such as sweets, lights, firecrackers and rangoli are like an integral part of Diwali. Diwali makes people believe in humanity and always motivates a person to be loyal and to be at the right side.

Elements that make Diwali so Special!

Lord Rama is believed to be one of the bravest warriors till date and he courageously killed the demon Ravana. Lord Rama proved that he is always at the side of truth and no darkness can prevail in his presence. If you will allow Lord Rama to reside in your heart then no feeling of hatred that results in ill deeds will be able to overpower you ever. Wish you a very Happy Diwali.. !