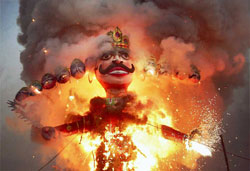 Dussehra date for the year 2017 is on September 30. Dussehra, also known as Vijayadashami is India's one of the most significant festivals. Dussehra is a pious symbol of victory of good over evil. It teaches a person to be courageous in all the situations and not to leave the path of good in any case. Dussehra is always celebrated on the tenth day of Shukla Paksha in the month of Ashwin in accordance to the calendar of Hindus. Dussehra is celebrated with great energy and enthusiasm after the nine days of the Navratri.

Dussehra is mainly celebrated in the month of September or October and in 2017, it is in September. The name Vijayadashami itself signifies that Lord Rama triumphed over Ravana on the tenth day. The Ramayana written by Valmiki consists of every fact related to the life of Lord Ram and how he defeated the demon Ravana. In simple terms, Dussehra significantly ensures the victory of good over evil and it signifies that there is no good in being evil.

Why is Dussehra celebrated?

While celebrating Dussehra, one should also know the reason of it. It is stated in the holy Ramayana that to demolish the tyranny of demon Ravana, Lord Vishnu took birth as Lord Rama. Lord Rama is believed to be the seventh incarnation of lord Vishnu. Ravana in his pride took Sita, the wife of Lord Rama with him and kept her in the Ashoka Vatika. Then Lord Rama with his brother Lakshman, Devotee hanuman and an army of monkeys fought a severe battle against an army of demons with Ravana in Lanka. According to the mythology, Lord Rama worshipped Goddess Durga with pure heart and got the secret of killing Ravana. On the tenth day of the Ashwin month Lord Rama won the battle in Lanka by killing ten headed Ravana and rescued his wife, Sita. Lord Rama in his entire life followed the path of truth and justice. By killing Ravana in Lanka, Lord Rama proved that it doesn't matter how powerful a person is, if the intentions are not good then he can't win the battle of life.

The celebrations of Dussehra are very unique as they depict the complete life of Lord Rama for over 9 days and it ends on 10th day with the death of Ravana. The act of Lord Rama’s life is popularly known as Ram Leela all over the country. The 9 day festival (Sharad Navratri) celebrated before Vijayadashami is celebrated in different ways in different parts of the country. In some regions, it is celebrated by worshipping Goddess Durga and performing a dance called "Dandiya" in her honor. And, in many regions the Ram Leela is carried for 10 days with utter devotion to the Lord Rama. Huge dummies of Ravana, Kumbhakarna and Meghnath are constructed so that they could be burned on the day of Vijayadashami. People enjoy the Ravana being killed by their Lord and celebrate it with each other. Some places also organise huge fetes and people in large number come together to pay a tribute to Lord Rama.

Ravana was a powerful demon and he had ten heads. Even with the power of 10 demons, Ravana couldn't win the battle against the good. The ten different heads of Ravana are symbol of ten bad habits in a human such as pride, greed, lust and so on. Therefore by burning Ravana every year, we burn the Ravana that prevails inside us and takes us to the wrong path. To eliminate the evil completely from earth it is important for all to kill the evil that resides inside us first. This is the main significance of the festival Dussehra. Dussehra is not only meant to celebrate and have fun but the hidden meaning of the festival is to believe in doing good.

Take a pledge of being good, kill the Ravana that misleads you and have a great Dussehra.