The 12 Signs of the Zodiac are the center of astrology. Each zodiac sign has its own set of features and characteristics that are said to be descriptive of those born under it. 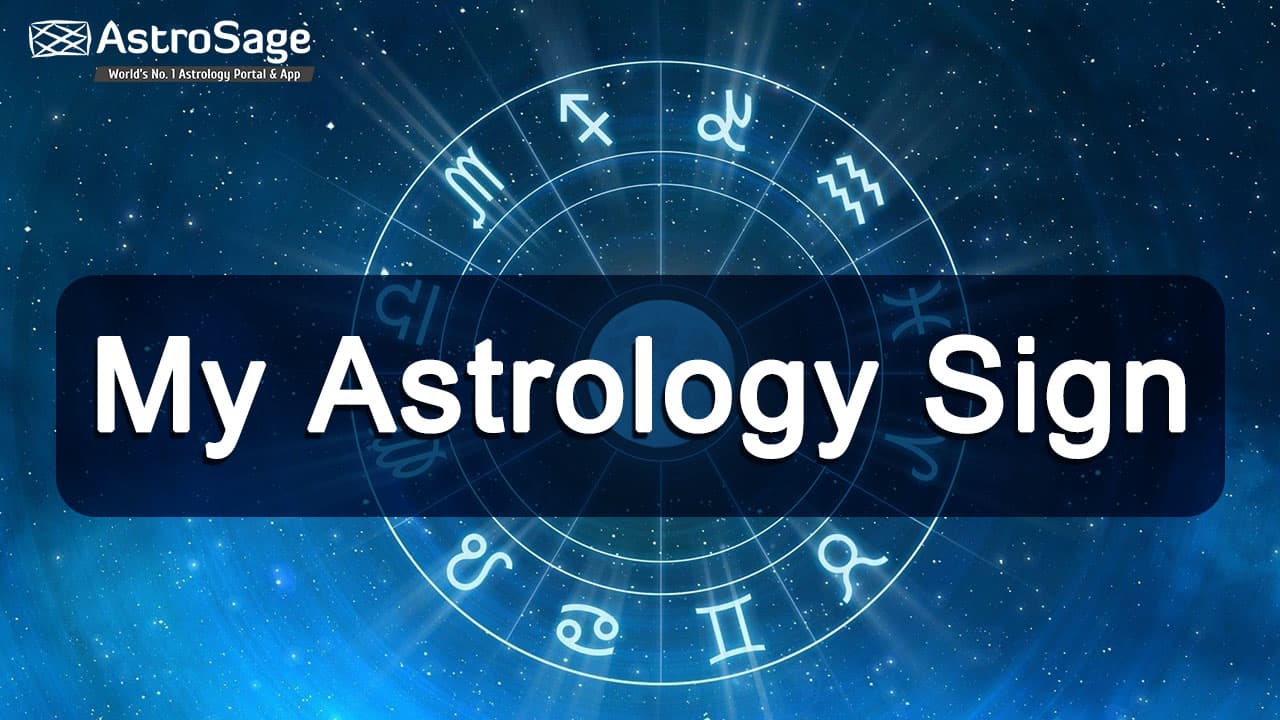 To know about your sun sign, you only need to enter your birth details. By providing your date of birth, location and time you can get to know your astrological sun sign.

If people born between March 21 and April 20 wonder ‘what is my astrology sign?’, then let us tell you that you are an Aries! Aries seems to have a restless, direct temperament and a high sense of self-worth. They despise being led by others and prefer to take charge of their own destiny. They have a slew of dangerous ideas that they are eager to put into action, putting forth little effort, time, or sleep in the process. They are tenacious fighters with a positive outlook. Aries dislikes doing the same activity for an extended period of time since it causes them to "burn out." Everything is the same in the love sphere: passionate outbursts, fantastic romances, and then a cooling-off period before switching to another lover.

A Ram is the zodiac symbol of Aries. Mars who is also known as the god of battle rules this sign. The origins may be traced all the way back to ancient Egyptian astronomy.

To Know More About Aries Native, Click Here To Read

Venus rules Taurus, which is linked to the goddess Aphrodite. The bull is the symbol of the sign. This sign's representatives are convinced that they were born to make the world a better place. They are almost entirely correct in this. Taurus has a remarkable ability to improve reality. When Taurus takes on work, there isn't much that can break the atmosphere for long. Such people are known for their generosity, yet if someone tries to offend one of their family, they turn ruthless. So, if you are determined, generous, and a protector of your family, and often ponder on the thought ‘what my astrology sign is?’, then you are most certainly a Taurus!

To Know More About Taurus Native, Click Here To Read

Gemini has a symbol that matches the sign name. Mercury is the ruler of this sign. The sign's picture is based on Greek mythology and the story of the brothers- Castor and Pollux.

If you are multi-faceted, dynamic, and unpredictable and are curious about ‘what my astrology sign could be?’, let us tell you that you are a Gemini. It's wonderful to spend time with them, but you're not going to wait for peace of mind. Gemini's main enemy is discipline, as they do not like to be restricted the same as their element air.

To Know More About Gemini Native, Click Here To Read

If you are born between June 22 and July 22 and often think ‘what my astrology sign could be?’, then we are here to tell you that you are a Cancer native!

People born under the sign of Cancer frequently have emotional outbursts, refined feelings, and exalted feelings. They are not concerned with material possessions. Cancers, on the other hand, enjoy making money and purchasing nice things. Family bonds are paramount in such people's lives. Cancer patients are preoccupied with the health of their loved ones.

The Moon is the ruler of Cancer, and it has a corresponding image. The roots of the symbol can be traced back to Greek mythology. He killed him because cancer is a bit Hercules in the leg. Hera, who is at odds with the demigod, is then cast into the night sky.

To Know More About Cancer Native, Click Here To Read

Leo is under the Sun's protection. Hercules defeated the Nemean lion, strangling him and rescued the victims kidnapped by the beast, according to Greek tradition. Zeus decided to keep this victory alive by erecting a lion in the sky.

It's impossible to overlook Leo natives. They always know how to get their audience's attention. Leos distinguish themselves from other individuals by having good taste and a drive to obtain costly items. Even if you don't like Leo, you can't help but appreciate him. Surprisingly, the attention-getting exterior conceals a character that is prone to criticism. So, if you have qualities similar to that of a Lion but are unsure of what ‘my astrology sign could be?’, then you are definitely a Leo!

To Know More About Leo Native, Click Here To Read

Does your date of birth fall between August 24 and September 22, but you are not clear on ‘what my astrology sign is?’, then we are here to help; you are a Virgo! Virgos are thought to be intellectually evolved individuals. They have the ability to say "no" to feelings that they do not believe are necessary. Virgo is a self-sufficient individual who has her own family.

Mercury has an effect on Virgos. According to folklore, there was a deity named Astrea who was the patroness of the pure and innocent. She ascended into heaven, immersed in rage, leaving humanity behind.

To Know More About Virgo Native, Click Here To Read

Venus is Libra's patron saint. The scales were regarded by the Romans as a symbol of justice.

It is commonly assumed that people born under this sign are indecisive, although this is not the case. They just consider a variety of elements while making decisions, including ones that are inexplicable to others. As a result, Libra spends a lot of time thinking about things. They're also really polite, pleasant, and cheerful. To ruin Libra's mood, you'll need a lot of patience and effort. So, if you possess all these qualities but were unsure until now about ‘what my astrology sign could be?’, then you are a Libra!

To Know More About Libra Native, Click Here To Read

Born between October 24 and November 22, but not sure of ‘what my astrology sign is?’, let us tell you that you are a Scorpio! Pluto is the ruler of Scorpio. Male scorpions, patrons of the sun god Shamash, were worshiped by the Babylonians. During the day, they let him out onto the ground, and at night, they locked the doors behind him.

These individuals are frequently "complicated," but they are also multifaceted and appealing. They have the ability to enchant everyone, but they will never do it for personal gain. Scorpios have a highly rich love life since they find the most comfort in the depths of passion. Scorpios are never alone since their love passions change all the time.

To Know More About Scorpio Native, Click Here To Read

If you are daring, spontaneous, and energetic, with a strong desire to expand and explore, but often ponder on ‘what my astrology sign is?’, you are a Sagittarius! Sagittarius natives despise confinement and crave for everything life has to offer.

They are wanderers in search of new ideas, connections, and experiences that will help them learn more about themselves and the world. Individuals with impulsive and restless personalities, on the other hand, may find it difficult to focus on a single activity or fear commitment or responsibility. Sagittarians were born to be free, and their positive outlook often brings them good luck.

To Know More About Sagittarius Native, Click Here To Read

Saturn is the patron of Capricorns. The goat is the sign's symbol. The Greeks believed in the presence of Amalthea, Zeus' adoptive mother, who protected him from Kronos, the devourer of his children, by giving him goat's milk.

Capricorns desire to build a solid foundation for their lives. Individuals are frequently motivated to work extra hard in order to achieve professional and financial success as a result of this. They value long-term relationships and a home life that appears to be a personal accomplishment just as much. Although they can be stingy at times, these people are disciplined and determined. Due to their own sense of realism, they may be less emotional than others, unwilling to be distracted by sentiments when confronting reality is easier. Despite this, Capricorns are noted for having an excellent sense of humor, which aids in their social interactions. So, if you resonate with these qualities but used to wonder ‘what my astrology sign could be?’, then it is safe to say that you are a Capricorn!

To Know More About Capricorn Native, Click Here To Read

If you are born between January 20 and February 18 and often think, ‘what is my astrology sign?’, you are an Aquarius!

Aquarians are ruled by the planet Uranus. The symbol of the sign is a man with a jug.

Aquarians are intellectual, self-reliant, and thoughtful, and they are frequently intensely focused on their thoughts and ideals. They are eager for information in order to solidify their understanding of how the cosmos and society work around them. They are open to new ideas, but once they have established their fundamental analysis, they will not budge from their position.

On the one hand, this can give them a sense of genius for learning more about life and others, but it can also make them stubborn and closed-minded in the end. Aquarians are particularly sociable. They like to portray themselves as one-of-a-kind, unusual, and imaginative individuals who stand out from the crowd.

To Know More About Aquarius Native, Click Here To Read

The patron saint of Pisces is Neptune. The sign is depicted by the fish.

Pisces is a sign of the zodiac that is associated with old souls who are imaginative, intuitive, and emotional. Because they have an innate connection to the mystical and spiritual realm, they are drawn to extremely passionate, creative, or transforming occurrences. They are extremely sensitive and empathic, often putting others' needs ahead of their own. They're wonderful friends with a thriving social life full of interesting people. They are extremely sensitive and have the ability to tune into energies that the majority of people are oblivious to.

However, because of the amount of information they absorb, they may become overwhelmed or impressionable to others. Once this occurs, Pisceans tend to let go and embark on a new journey, never hesitant to reinvent themselves. Do you have all the above-mentioned qualities but are skeptical of ‘what my astrology sign is?’, then you are most likely a Pisces!

To Know More About Pisces Native, Click Here To Read