Home » Astrology » What is Astrology? 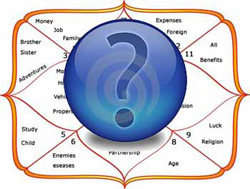 What is astrology all about?

The question might seem trivial in nature but astrology has been mired in controversy and confusion since its advent. People believe it, people deride it and there is even large number of people who accept astrology. People with great affiliation with sun signs assume that it is somehow similar to other psychic disciplines. However, the truth is astrology is quite different as it is very different from all these disciplines. Astrology is primarily concerned the planets, the sun, the moon, asteroids and comets and stellar bodies outside the solar system.

In more methodical sense it is the science of studying celestial bodies and how what is their effect on human life. Did you ever think why when their is a Full Moon people are angry and there are more cases of road rage? Is this mere coincidence? No, not at all.

Many famous people have contributed in astrology such as Pythagoras and Sir Isaac Newton were astrologers. The Bible is filled with astrological information. Surprisingly, Christ had 12 disciples and their were 12 tribes of Israel associated with the 12 signs of the zodiac.

A very basic astrology reading and after looking at the planets, their positions in the sky at the time of birth, and how they interact with each other. These unfold many clues to your life. It also tells from where your power comes from in this lifetime. These skills and abilities were developed in previous lifetimes. You can know your life path through astrology. This can help you assess your true skills and how to harness them. You will be able better utilize that latent energy to make your life better.

There are different cycles in astrology. There are 13 Moon cycles every twelve months. Each year around your birthday the Sun returns to its natal position. The Solar Return is when the Sun reaches the exact degree that it was at your birth. By looking your chart your future can be predicted with accuracy. Saturn moves through its cycle every 29 years and planet Mercury goes through three retrograde periods every year, when it appears to be moving backwards in the sky. These things have significance in life. It also tells us about familial, romantic and other types of relationships.

A successful career has become very important. For many people it is quite difficult to choose right career. Career astrology can guide you in choosing the right path after systematic analysis of horoscope. In Vedic astrology most important house is the first house or lagna. The first house represents the person as a whole. In western astrology, the tenth house is very important. But the house position of also demands many other things to study carefully.

It is also very important to know about the conjugal compatibility and astrology can have predictions with greater degree of accuracy.

And at last it also depicts about Karmic path. Studying our karma helps you unlock path to prosperity and spirituality.

Is astrology an accurate method to predict about future?

There are skeptics who doubt about astrological prediction. But, irony is that astronomy and astrology developed quite together. Mathematicians and great scientist Aryabhatt has significant impact on astrology and astronomy. Same is the case with Varahmihir. Even Newton was a great astrologer. Here are views of few great astrologers:

"Practical experiment will soon convince the most skeptical that the bodies of the solar system indicate, if they do not actually produce, changes in: 1. our minds. 2. Our feelings and emotions. 3. Our physical bodies. 4. Our external affairs and relationships with the world at large." -Charles Carter, leading British astrologer of his day said in 1925.

French astrologer Paul Choisnard, whose verdict was based on his experimental tests, says:

"Official science will recognize that the ancients were not mistaken, and astrology, aided by new methods of investigation, will recover its ancient prestige."

The astrologer can tells you things that cannot be possibly known. You might not have faint idea that how it works but it works. Millions of people have tested astrology in this way only and they are convinced that it works.