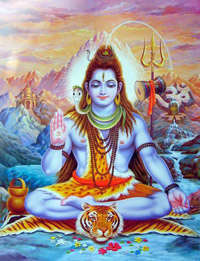 The Mahamrityunjaya Mantra is:

In certain Hindu religious texts, the Maha Mrityunjaya Mantra is mentioned along with the Beej mantra as:

Meaning of the words in Maha Mrityunjaya Mantra:

"I meditate and pray the three-eyed one, Shiva, who increases the fragrance and nourishment. Free me from powerful diseases, bonds and death and grant me immortality."

The Mrityunjaya Mantra frees one from untimely death. It is a life giving mantra. This Mantra wards off uncertain death that is caused by snake bite, lightning, accidents by vehicles, accidents by fire, air- accidents and all other forms of accidents that result into untimely death. It has curative effects as well. When this Mantra is chanted with utmost devotion and faith, it can cure even those diseases that doctors fail to cure. Such is the power of Maha Mrityunjaya Mantra. Chanting this Mantra with pure heart bestows healthy life, longevity, wealth, peace, prosperity and salvation (Moksha).

The legend of Markandey

Once there was a sage named Markandu. He and his wife pleased Lord Shiva through severe penance. When pleased, Shiva appeared before them and granted a boon saying, “Either you will have bad son who will live for 100 years or a divine and good son who will only live for 16 years. Now choose which son you desire to have?”

Sage Markandu and his wife opted for good son, though short-lived. Shiva blessed them with a divine son whom they named as Markandey. When Markandey was only eight years of age, he knew all the holy scriptures and every other thing that must be known for self actualization. He gained this knowledge from his father. However, he was unknown to the fact that he is short-lived and will only live for 16 years. His parents never revealed this to their son, but asked him to worship Lord Shiva regularly.

When the last day of the sixteenth year of his life came, Yama, the God of death appeared and stood before him. He threw his snare on the nose of Markandey, while he was sitting and worshipping Lord Shiva. Markandey’s breath was disturbed as Yama started to pull out life or soul out of his body. With immense devotion, Markandey embraced the holy ‘shivling’ (a divine form of Lord Shiva) and suddenly recognized the great Mantra known as Maha Mrityunjaya Mantra.

When Markandey started reciting the Mahamrityunjaya Mantra, Shiva appeared before him through the holy Shiva Linga and drove away Yama. The God of death then went back and Shiva blessed Markandey to be the master of Himalayas till eternity.

Why and How is Maha Mrityunjay Mantra Chanted?

Maha Mrityunjaya Mantra is one of the two important mantras explained in Vedas, the other being Gayatri mantra. It is chanted to evade untimely death and bring peace and tranquility to the mind of humans. The Mantra is also very powerful to heal the health problems that cannot be cured even by the doctors.

The Mantra should be chanted while facing the east or north direction. Use a Rudraksha rosary and use the thumb and ring finger in order to rotate the beads. Keep a copper vessel full of water in front. Chant the Mantra for 108 times. When you finish chanting the Mantra for the aforementioned times, drink the water. Starting this practice on Monday is very beneficial as Monday is the day of Lord Shiva. You should also sprinkle some water in and around your house while chanting the Mantra to keep negative energies at bay. This will bring a lot of calm and peace to you by destroying the negative energy around you.

The Mantra is known to emit positive vibrations and create a divine armor around the person who chants this Mantra with pure heart and devotion. This saves you from every kind of disease and negative forces.