Amavasya 2023 Special by AstroSage: The dates of every new moon that will occur in 2023 will be listed in this article. We will also discuss the significance of Amavasya 2023 Tithi in this article, as well as the rituals that are carried out on this day and the several Amavasya 2023 days that occur throughout the year, in order to further educate you with the knowledge you need. 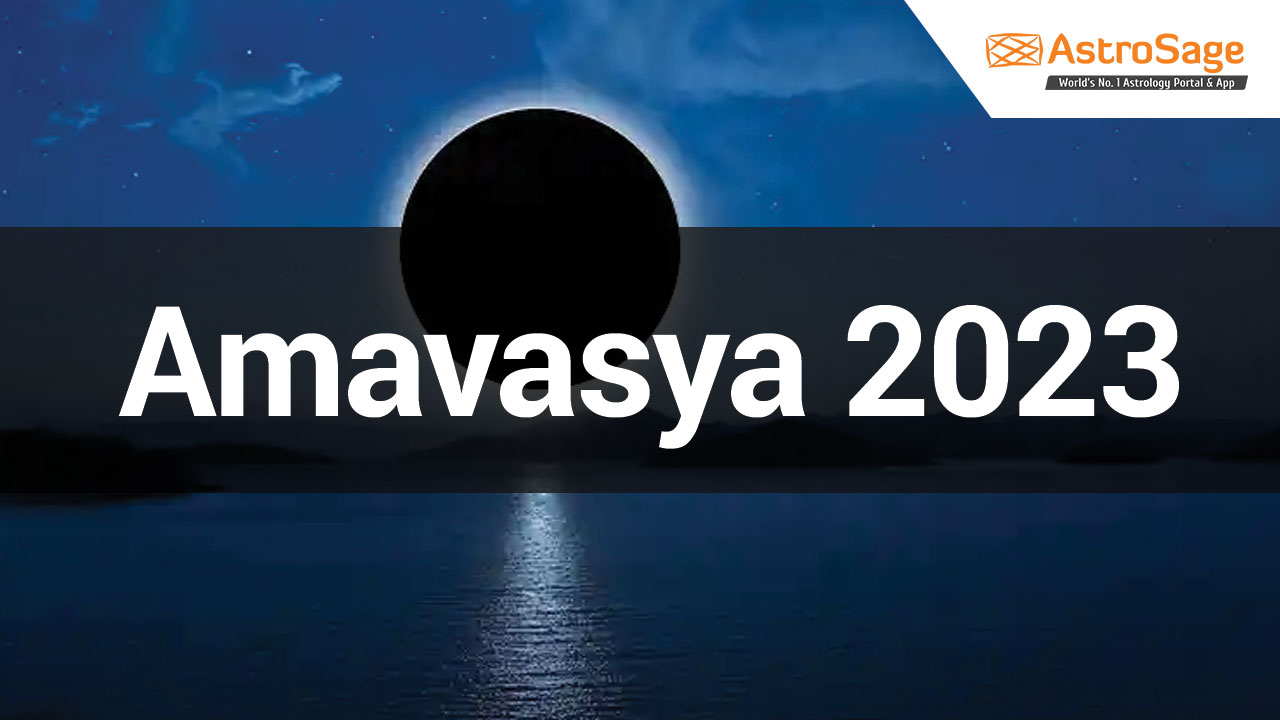 
Are you worried about your future, get remedies from Best Astrologer On Call!

Amavasya is the darkest night of the moon, which is why many people believe it is unlucky to start anything new on this day. On the day of the new moon in Hinduism, no new work is done. Nevertheless, Amavasya 2023 is also regarded as a lucky day for doing tarpan, fasting, and ancestor worship. On this day, people worship Lord Vishnu.

What Is The Meaning Of The Word Amavasya? Speaking about this, the word "Ama" and "Vasya" together indicate to reside or live in it.

The Amavasya Tithi occurs in the month when the Moon is in the Sun's house. In other words, the Sun and Moon are visible from the same side of the Earth. The moon's darkest day is Amavasya. When the angular separation between the Sun and the Moon is within 12 degrees, this date occurs.

Due to the fact that this day is the blackest, it is best to avoid carrying out any auspicious tasks, including planned pregnancies, home entries, land or property purchases, jewellery purchases, important journeys, naming ceremonies, and major business transactions.

Significance Of Amavasya In Hindu Panchang

In Hinduism, Amavasya has special religious significance. The day is seen as the best chance to give tribute to one's ancestors and deceased family members, worship them, and offer prayers for the tranquility of their souls. When there is no moonlight, it is believed that the sunlight reaches them. On this day, it's also said that those who pass away on the new moon day must return to be with their heirs and children.

This day is considered patriarchal by the Vishnu Dharma Shastra (Soul of the Ancestors). The new moon day is considered as extremely unlucky by most people. On the day of the new moon, someone who already has mental instability will become much more unstable. On this day, everything is drawn toward the Moon by its gravitational pull. The bad forces and powers of the earth are considered to be at their strongest on Amavasya Tithi.

Amavasya 2023 Tithi is given more significance when it falls on a Monday. On this day, women are said to become pregnant by adhering to certain fasting rituals, etc. Additionally, by observing the fast of Amavasya Tithi, which falls on Monday, all of a person's wishes are also granted.

The information for each Amavasya 2023 date is provided below. Along with this, you will learn through this list when the new moon date begins and how long it will last.

Importance Of Amavasya Tithi And Fasts Observed On This Day

Amavasya Tithi Types And Their Importance

All of the Amavasya 2023 Tithis that occur throughout the year have unique and significant meanings. Such as Paush Amavasya, Mauni Amavasya, Hariyali Amavasya, Mahalaya Amavasya, Somvati Amavasya, etc. Let's learn a few more crucial details about them so we can understand them better.

Mauni Amavasya 2023: Mauni Amavasya, which occurs between January and February during the month of Magha, is regarded as having immense spiritual significance. On this day, devotees observe fasting and engage in silent worship. Additionally, Magha Amavasya is another name for this Amavasya. It is considered important to take a holy bath in the Ganges on this day, which is known as Mauni Amavasya Snan.

Mahalaya Amavasya 2023: The final day of Mahalaya Paksha marks Mahalaya Amavasya. This day is seen to be extremely lucky for giving and worship. This new moon typically occurs during the months of September and October. It is also referred to as Pitru Amavasya, and this period of time is ideal for the ancestors' souls to find peace.

Thai Amavasya 2023: It is the first day of the new moon in the Tamil month of Thai (January–February), and it is very important in Tamil culture. The Thai holiday Amavasai is devoted to the ancestors. On this day, specific prayers, ceremonies, and rites are to be performed for the peace of the departed souls. Tamil Nadu is the primary state where this Amavas is observed. People take a holy bath, perform Shradh, and offer tarpan to their ancestors on this day.

Savitri Amavasya 2023: The Savitri Amavasya ceremony is carried out in Orissa on the final day of the dark fortnight following the new moon in the Jyeshtha month. May and June are the months when it occurs. Women get up early, take a holy bath, put on fresh clothes, wear bangles, and apply vermilion on this day. Then, nine different kinds of fruits and nine different kinds of flowers are offered to Goddess Savitri. Between dawn and dusk, women observe fasts. Throughout the day, they offer prayers for their husband's long life and hear the story of Savitri, who stopped the death god from taking her husband Satyavan.

Hariyali Amavasya 2023: The Hariyali Amavasya falls on Sawan's Amavasya. On this day, the law governing the worship of Goddess Parvati and Lord Shiva was revealed. On this day, married women worship the goddess Parvati with vermilion. Additionally, it has been highlighted how significant it is to worship the Peepal tree on this day. A person will have plenty of money and profit in their life by observing fast on this day.

Paush Amavasya 2023: Paush Amavasya is the name of the Amavasya that falls during the month of Paush. There is a tradition of performing Shradh and Tarpan of Ancestors on this day. On top of that, bad forces are strongest on this day. Additionally, on this day, black magic and other things are practiced. Paush month is often referred to as the Saubhagya Lakshmi Paush month. It is considered lucky to worship Dhana Lakshmi and Blessed Lakshmi on the eve of Paush Amavasya, according to scriptures and Hindu mythology.

Its Effect On Rahu And Amavasya

Amavasya 2023 Tithi is regarded by many as unlucky, as we have mentioned. This is primarily due to the fact that this day is ruled by the planet Rahu. It is crucial to realize that the Amavasya date corresponds to the moon's minimum illumination in this condition. Rahu takes on a more significant role in this scenario, weakening our minds and causing troubles in our lives.

Considering that Rahu has more sway today and the Moon's strength is much weaker. In such a situation, it is important to make sure that we only carry out good deeds and actions that will enable our rebirth. It has frequently been observed that because of the planet Rahu's influence on the Amavasya Tithi, individuals are frequently forced to take actions they ordinarily would not like to take or that could negatively impact their lives. Keeping away from these things in such a situation is crucial.

Relation Between Rahu And Amavasya

In accordance with the accompanying popular myths, it is believed that on the day of Amavasya, the Moon molested Mother Tara. It is the worst to cast an evil eye on Maa Tara's guru husband because he is regarded as the planet Jupiter and was the ruler of the Moon.

The Moon had been cursed by Mother Kali as a result. This is the justification for the old saying that those born on Amavasya Tithi should live their lives with greater caution. Furthermore, no auspicious work is carried out on this day as a result of this. Amavasya Tithi is related to demise and the end of time.

People who are born on the new moon day are frequently perceived as having some mental issues, making false accusations, being depressed, or having a tendency to cheat. In addition to this, they still deal with child-related issues. But taking the appropriate actions enables one to overcome these issues.

What Is Amavasya Dosha?

In a birth chart, the Sun and Moon together can result in Amavasya dosha. Under the influence of the Sun, the Moon becomes weaker and stays weak during the new moon. It stops having a favorable impact. Tithi dosha is associated with Amavasya.

People who experience Amavasya Dosh in such a situation have a very difficult time in life.

Reasons To Avoid Traveling During Amavasya

Elders frequently advise avoiding traveling on the Amavasya 2023 Tithi. However, when we investigate the cause of this, we discover that in older times, when there was no village lighting at night, and because the new moon night is dark, traveling would have been a dangerous endeavor. Travel was considered taboo on this day because of this. In addition to this, the new moon day has an impact on animal psychology, making them naturally more aggressive. As a result, traveling on this day should be avoided.

In addition, the new moon day is known for its strong negative energies and tantric rituals. It is advised that on this day, if at all possible, avoid going out at night to avoid any unfortunate events.

During Amavasya 2023, no fresh beginnings should be made. The reasoning behind this is that every planet in orbit has a significant impact on our life, and since the moon has zero power on new moon days, it can have an impact on both our physical and mental abilities. On the new moon day, the moon's influence is zero, which is why we don't have a strong intuition to start anything new. The moon is known for intuition and the power of ideas. This is the reason it typically happens that even when we start anything new on the new moon day, we frequently fail to make it work.

Chant the Chandra Gayatri Mantra on the new moon day and place the Chandra Ratna nearby if it is very vital to start over or go on a journey.