Blood Moon: Discover when the Moon will turn Red and its effect on the natives 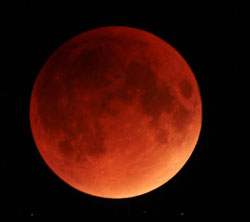 Blood Moon is a common astronomical phenomenon which induces curiosity in everyone as many people rush to the internet to know what is a blood moon or at what time is the blood moon occuring. The term “Blood Moon” attained popularity when two Christian preachers Mark Biltz and John Hagee, shed some light on the prophecies mentioned in the Bible associated with Lunar Tetrad. When four successive Total Lunar Eclipses took place in a series of six lunar months and no partial lunar occured in between, it was termed as Lunar Tetrad. It happened during April 2014 and September 2015 respectively. However, according to the conventional practices, every total lunar eclipse is called a Blood Moon in the Contemporary world.

What is a Blood Moon?

Red Blood Moon or Blood Moon is a natural celestial event. As we know, the Moon revolves around the earth and earth revolves around the sun. Sometimes our planet, the Earth comes between the Sun and the Moon. During this event, the total illuminating light from Sun only reaches the Moon’s outlines and not does not spread through the entire planet.

If we talk scientifically, it is a natural process which comes into the picture when earth’s umbra covers the Moon completely when it passes behind it. In such a scenario, the Moon appears to be red or coppery brown and thus, such a Lunar Eclipse comes to be known as a Blood Moon. It is a well understandable fact that Blood Moon can occur only during a Total Lunar Eclipse.

Astrological Significance of the Occurence of Blood Moon During Lunar Eclipse

As per Vedic astrology, Moon Sign is of vast immense in a native’s life as the Moon has much importance among all other planets. Moon controls one’s mind and approximately 70 percent of the human body consists of water which comes under the governance of Planet Moon. Thus, the Moon is very important in astrology. Scientifically speaking, Lunar Eclipse or Chandra Grahan is a very normal event but for the sake of thrills, it is given a celebratory status by many people. It is so, because the colour of Moon becomes red and its image becomes attractive during this event. But, the event has crucial astrological importance as its impact navigates the lives of each and every individual being.

According to Vedic astrology or Hindu religion, the blood moon lunar eclipse has great significance because the classics of astrology state that it creates negative impacts in nature and eventually affects the life of all human beings. People develop the tendency to feel more anxious and restless due to this event and a strange silence crepes in the environment which generates an unnatural fear prophesying the occurrence of inauspicious circumstances. A few of the same are appended below:

As per astrological principles and calculations, Lunar Eclipse takes place in a particular zodiac sign and a particular constellation (Nakshatra). People born under that sign or Nakshatra are more likely to be at the receiving end of negative effects, as compared to the natives belonging to other zodiac signs and Nakshatras. For example, if Blood Moon Lunar Eclipse is taking its shape in Aries zodiac sign and Bharani Nakshatra (whose ruling Lord is Venus) then it can have adverse impacts on Aries natives and also those who are governed by Bharani Nakshatra and the planet Venus.

There are some remedial measures as per astrology and Hindu religion which can be done to get rid of the malefic effects brought forward by a Blood Moon eclipse. If you perform them, you may stay safe and ill effects will be at bay. A few of them are mentioned below:

What time is the Blood Moon Occuring?

Now, the question arises when is the next Blood Moon occuring to which we have an answer. You will have to wait for a very long time as the next total blood moon eclipse will take its shape on 26 May, 2021 and it will be visible from Asia, Pacific and Australia. On the other hand, people of America cannot watch this event as it will occur at moonset for them.

Somehow, if you have missed to bear witness to this celestial event, the next Blood Moon can be seen on 16 May, 2022 and it will be seen from Europe, North and South America and Africa.

However, if your wait is a bit longer, you can watch partial lunar eclipse in between. These will be apparent for most parts of the world.

Apart from the Blood Moon, there are some common phenomena associated with the Moon. Let's check them out very quickly:

It is another term used for a specific blood moon or sanguine. Hunter's Moon is a traditional word which is used to refer to a full moon. It appears in the month of October i.e. after the harvest moon. The harvest moon occurs in the month of September and is very close to the autumnal equinox. When Hunter's moon appears, mother nature adorns a soothing and cooperative demeanor and adds contributions to make the moonrises of the fall, unique.

When we listen to the word Supermoon, our eyes shines as it is actually a full Moon and the Moon bestows its full radiance on this day. It comes very near to the earth and an even closer proximity to the elliptical orbit of Mother Earth. Thus, it shines in a very bright manner. On this very day, the Moon’s appearance also looks much bigger as compared to the other days. Considering all of these facts, it is known as Supermoon.

The Second full moon occuring in a month of the same year is known as Blue Moon. It occurs after almost every 29.5 days. Therefore, we can understand that first full moon takes place at the beginning of the month and second one which is called Blue Moon presents itself at the end of the month, in most of the cases. But, it should not be presumed that the Moon will turn blue during the occurrence of this event as nothing of that sort happens.

It is necessary for a second full moon to appear in a single month and then only it will be a blue moon. On an average, it occurs after every two and a half years. The upcoming blue moon will take its shape on 31 October 2020.

This is another phenomenon known as Super Blue Blood Moon. It is nothing but the complete package or combination of a Blue Moon, Supermoon and Blood Moon, which means all three would come together to form an eclipse.

We hope, this article pertaining to Blood Moon will help you understand its meaning and other aspects associated with it.