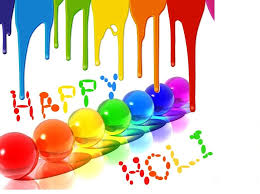 The Indian sub-continent is nothing less than a palette of colours. You have every shade, each so different yet so necessary to make a complete painting. The festival of Holi binds different parts of the Indian Sub - continent into a complete whole. Every state participates in the celebration of Holi. Each state has its own unique way of celebrating this festival of colours.

Celebrations of Holi have several things in common: the splash of colours, the festive mood, warmth compassion and great food and delicacies. So what's it that makes celebrations of Holi so different in different parts of India. The answer is the manner in which it is celebrated and the reason for celebrating it.

Legend has innumerable tales to tell about the reason of celebrating Holi. Each region finds an association with any one out the different legends. Moreover Celebrations that initially started as a part of customs and rituals later assumed variations with change in times and people's preferences. However there are certain unique celebrations that deserve a mention when talking about Holi in different regions of India .They are as follows:

The land of Radha and Krishna the celebration of Holi has a unique flavor in Mathura and Vrindavan. One of the unique features of the festival here is that celebration of Holi here is centred around temples of Lord Krishna. Devotees of Banke-Bihari celebrate Holi..reliving Lord Krishna's prank of teasing the gopis by playing with colours. It is interesting as well as amazing, to watch devotees at the Banke-Bihari celebrate Holi chanting the name of Krishna and Radha.

The birthplace of Lord Krishna's beloved Radha, Barsana celebrates Holi with extreme enthusiasm as Krishna was famous for playing pranks on Radha and gopis. Holi played at Barsana is unique in the sense that here women chase men away with sticks. Males also sing provocative songs in a bid to invite the attention of women. Women then go on the offensive and use long staves called "lathis" to beat men folk who protect themselves with shields. During Lathmar Holi the women of Barsana attack the men from Nandgaon, the hometown of Krishna, with wooden sticks in response to their efforts to put color on them.

Every year during Holi celebrations in Jaipur organises the Elephant festival. This draws visitor from all over the world. The elephants stride majestic-experience for everybody by parading their decorated trunks and tusks. The elephants that take part in this festival are female ones. Elephant parades, elephant beauty contests, folk dances, and tug-of-war between elephants, locals and foreigners are all regular events. It makes Holi here different and adds to the fun!!

Here celebrations start three days prior to the actual date of Holi. Purulia is a district of West Bengal. One gets to sing and play Holi with the locals, as well as enjoy a wide variety of unique folk art. Become a part of the remarkable Chau dance, Darbari Jhumur, Natua dance, and songs of West Bengal's played by Baul musicians .It is organized by the villagers and it helps in their livelihood.

Also known as Vasanta Utsav Holi in Shantiniketan, has become a cherished part of Bengali history and culture, and it attracts numerous foreign tourists. Cultural Holi was started by famous Bengali poet and Nobel Laureate Rabindranath Tagore. Students dress up in spring colors organize cultural program for visitors, including dances to Tagore's songs. This is followed by play of colours. It is an annual event in his Vishva Bharati University.

Holi is a colorful festival celebrated during the spring season (March), in India. It is the time, when people let their hair down and enjoy the time with fun and fervor. As the festival falls on the transition stage from chilly winters to summers, it brings in a degree of warmth and fills the air with festivity. Few days prior to the festival, people indulge in the merrymaking.

If Stepping out on Holi be prepared for being coloured by shopkeepers, strangers and children. A festival of color, music and madness, people don't actually mind the crazy fun. Just that one should ensure it is safe, and non-toxic colors is used.Along with bhang lassis, street food, and sprinklers to get everyone in the mood it's out and out fun. At clubs and lounges you have the DJ's performing giving Holi celebrations a cosmopolitan flavor in major cities and metros.AstroSage.com, wishes all visitors a Very Happy Holi and a colourful life ahead.