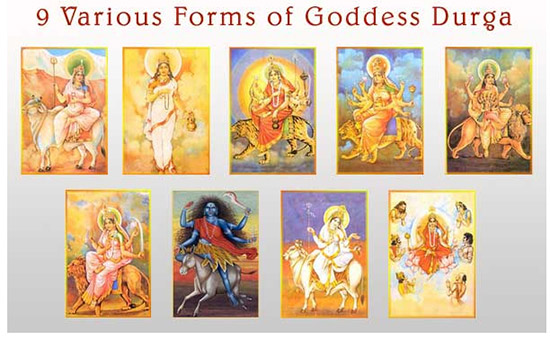 Navratri is known to be the most auspicious days of the year. It is considered as an important event among Hindus all over India. The main two navratras are Chaitra Navratri and Sharad Navratri. Within these 9 days, Goddess Durga visits her devotees and bless them with good fortune. To know more about Navratri, read on..

Navratri is the time when the universal mother, Goddess Durga is worshiped. The Goddess is known as the remover of sufferings and troubles of life. According to the beliefs, it is the energy of Maa Durga, which carries out the continuous cycle of creation, conservation, and demolition of the universe. During Navratri, you can also worship Goddess Durga, and her nine forms to get her blessings. So, keep Navratri fasts and please Goddess Durga to get your wishes fulfilled.

Navratri is the time when the universal mother, Durga is worshiped. The goddess is known as the remover of sufferings and troubles of life

How To Celebrate Navratri

Each day of Navratri has some rituals, which are followed by all the devotees of Goddess Durga. Read the below described points to know the significance of each day.

As per the Hindu Panchang, 5 types of Navratras are celebrated every year. Let's take a look at the names of these Navratras, along with their dates for 2017.

Let us now each of these 5 Navratras in detail.

Take a look at the dates & days of Sharada Navratri 2017.

Take a look at the days & dates of Ashadha Gupt Navratri 2017:

Have a look at the days and dates of Magha Gupt Navratri 2017:

Paush Navratri will commence on December 26, 2017 and will be celebrated till January 2, 2018. Paush Gupta Navratri falls during Paush Shukla Paksha. As this Navratri is devoted to Maa Shakambri, it is also known as Shakambhari Navratri. Paush Gupt Navratri is celebrated mostly in Uttar Pradesh, Maharashtra, Rajasthan, Tamil Nadu, and Karnataka.

Hence, on the auspicious occasion of Navratri in 2017, you can also worship these nine forms of Devi Maa and earn her blessings.

Goddess Of Each Day Of Navratri

Be it any of the five Navratris, the nine forms of Goddess Durga worshiped on each Navratri are same. Let's talk about all these 9 Avatars of Maa Durga.

Goddess Of Each Day

Navratri commences with worshipping of Shailputri . The goddess is the first form of Durga and rides on a bull with a trident and lotus in her hands.

Brahmacharini signifies love, affection and loyalty. Also, known as the storehouse of wisdom and knowledge, the Devi holds a rosary and Kumbha (water pot) in her hands. Her sacred ornaments are the beads of Rudraksha.

The goddess got her name as she has a half- circular moon on her forehead. With a golden colored look, the Goddess has 3 eyes and 10 hands. Chandraghanta is the goddess of peace and tranquillity and is mostly worshipped in the state of Tamil Nadu.

Kushmanda resides in Bhima Parvat and shines as the aura of sun. Her vehicle is a tiger and she has eight arms.

The ocean of knowledge is this goddess who sits with her skanda (son) in her lap. She has 4 hands and 3 eyes, the Skanda Mata rides on a lion.

Maa Katyayani is known to bless the women with husband of their wish and choice. Observing fast for the Goddess is very helpful for the women whose marriage is getting delayed. Devi Katyayani gives strength and ability to overcome fears, diseases and miseries of life.

Maa Kalratri is the destroyer of ignorance and the enemy of darkness. She has black or blue appearance. The goddess has a donkey as her vehicle.

Maha Gauri shines as white as Moon and believed to be the Devi of compassion and peace. Riding on a bull, Maha Gauri holds a trident and drum in her hands.

Siddhidatri is the Goddess who gives Shakti (power) to lord Shiva. It is because of her gratitude only that the lord became Ardhanarishvara (half men and half women).

This Navratri, worship Maa Durga with complete devotion and enthusiasm. We have make sure that you don't miss out any of the essentials needed for Navratri Puja. To know the Puja materials for this Navratri, check out the following points:

To begin the fast, the observer takes shower in the morning and wears neat and clean clothes. Durga Mata is worshipped and Aarti is done. Dry fruits of 5 types, fruits, mishri and milk are offered to the Goddess as Bhog. After this, devotees can take the food meant for Navratri. In the evening, Puja is done again and Aarti is done with lighting incense sticks (Agarbatti). Be ready to keep the Navratri fast in 2017 in the best way so that goddess accepts all your prayers and get them fulfilled in 2017.

Bhoga For The 9 Days

Food To Be Avoided During Navratri

Navratri is the time for celebrations. Though, each state of the country celebrates Navratri according to its traditions and customs, but the two main highlights of Navratri are: Garba and Durga Puja. Let's throw some light on both these widely celebrated traditions.

Kolkata celebrates Navratri with charm of Durga Puja. Grand celebrations are held in the honor of Maa Durga. Huge Pandals and statues of the Devi are arranged for people to assemble and worship the Goddess. Idols of the Goddess are installed in every home, community and society to seek the blessing of Maa. People of every age and caste enjoy the rituals to the fullest by mixing in the colourful joyous ambience.

In Gujarat, the major highlight of Navratri is the time for traditional music and popular folk dance, Garba. Gujarati community welcome Navratri with cheer, laughter, gathering and festive mood. Dressed in traditional wears and with colourful sticks (Dandia) in hands, Garba is accompanied with singing and music. The sticks or Dandia used in Garba depict the sword of Maa Durga. Colorful embroidered Cholis, Bandhani Dupattas, Ghagra and the sparkling jewelry adorned by women are the captivating features of this traditional dance.

How can we miss out his grand celebration of Navratri in 2017 without discussing the dishes for these nine days. Devotees of Durga offer prayers to the goddess and observe fast to invoke her blessings. While strict observers consume only fruits and milk; whereas, partial observers consume on the following ravishing delicacies:

Double up the celebrations this Navratri in 2017, with some of the very popular Navratri songs:

Colors To Wear On Each Day

Navratri is not only the time to offer prayers to Maa Durga, but is also the time to wear nine different colors. Have a look at each of these colors and make your Navratri different, ethnic, and colorful.

We hope that this article must have boosted your knowledge regarding all the 5 Navratras celebrated every year. With this article on Navratri 2017, please Goddess Durga and her manifestations to earn her blessings and Shakti for a fearless and successful life.

We wish you all a very Happy Navratri!