Devi Siddhidatri is Worshiped on Ninth Day of Navratri 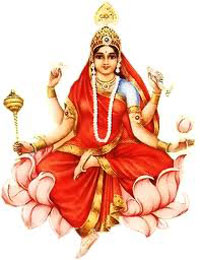 Devi Siddhidatri is the ninth manifestation of Shakti and is greatly worshipped among Nav Durga. On the final day of Navratri pooja, worshippers and devotees of Durga wonderfully pay homage to Goddess Siddhidatri. This Goddess is revered to offer all types of Siddhi (perfection) to her devotees and thus glorified with name 'Siddhidatri'. She is represented with four arms sitting on lotus flower. Her arms hold Gada (bludgeon), Chakra, Shankh (scallop shell) and lotus flower. Her appearance glows in red saree. Her procession is Lion. Worshipping goddess Siddhidatri on the ninth and final day of Navratri bestows all Siddhis to worshippers and successfully completes their Navratri Pooja.

It is mentioned in Vedic scriptures that Lord Shiva obtained all Siddhis by blessings of Siddhidatri that made his half Devi and glorified him with name 'Ardha Narishwar'. Worshipping Goddess Sidhidatri solely with mentioned customs and rituals certainly endows all Siddhis and blessings to devotees. On the ninth day of Navratri Pooja, Kanya Poojan is also performed with grand touch. Little girls are offered homage and feed with blessed meals. Yagya, Maha Pooja and other grand celebrations are also performed to delight Nav Durga on this day. Each day of Navratri has a significant importance, but ninth day is the most prominent, as this is the final and concluding day of Durga Pooja.

Different scriptures mention different numbers of Siddhi. As per Markendey Puran, there are mainly eight types of Siddhi names as - Anima, Mahima, Garima, Laghima, Prapti, Prakyamya, Inshitva, and Vashitva. But, in some other scripture numbers of siddhis are 18. Thus, by devoting prayers to Goddess Siddhidatri, worshippers certainly obtain all Siddhis.

All human beings should revere Goddess Siddhidatri to achieve absolute perfection. Siddhi makes the person highly eminent and glorified. After obtaining Siddhi, human beings observe enhancement in their charisma. And this is only possible if one pays heartily adherence toward Goddess Siddhi-datri. Ninth day of Navratri Pooja is especially dedicated to Devi Siddhidatri. Worshippers can accomplishe any kind of desire by just worshipping Devi Siddhidatri on the auspicious final day of Navratri. Her glory is boundless. She is said to be very generous for all mankind and animals on earth. Devi Siddhidatri is truly one of the most glorious aspects of Navdurga. With her grace, all wishes are fulfilled. It is also believed that grace of Devi Siddhidatri satisfies and controls all desires of her worshippers. There is no any type of wish remain in heart after worshipping her solely. She ends greed and unnecessary temptation toward material comforts. Pray Goddess Siddhidatri and get her immense blessings. Jai Maa Siddhidatri!