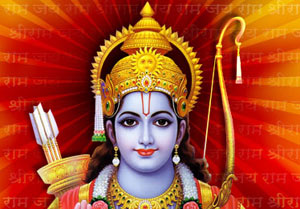 Ram Navami is one of the most important event in Hinduism. It is celebrated in the memory of birth of Lord Rama to King Dasharatha and Queen Kausalya of Ayodhya. He was the incarnation of Lord Vishnu. According to the Hindu Calendar, it is observed on the 9th day of Shukla Paksha of Chaitra month. As per the Gregorian Calendar, it will be marked on 5th April 2017. Gain more knowledge through this article....

While celebrating Ram Navami , it is a good idea to know about the history of this festival. The Ramayana demonstrate the whole life of Lord Rama, from his birth to all the incidents that took place in his entire life. The story is about the Treta Yug that is followed by Satya Yuga and later by Dwapara Yuga. The King of Ayodhya, Dasaratha had three wives namely, Kausalya, Kaikeyi and Sumitra. The King had no children and this was his greatest worry as who will be the successor of the throne. Rishi Vasishtha suggested the King to perform Putra Kameshti Yagna. Performing this Yagya could fulfill his wish of getting a child as per his desires. Rishi Vasishta also suggested him to invite Maharishi Rishyasringa and ask him to perform the Yagna. King Dasharatha went to Maha Rishi Rishyasringa Ashram and asked him to accompany to Ayodhya. The sage agreed and accompanied him to Ayodhya and performed the Yagna. The Yagna was successfully conducted and as a result, Yagneswara appeared before King Dasaratha. He gave a bowl of Kheer to Dasaratha and asked him to give it to his wives. Dasaratha gave half of the Kheer to Kaushalya, half to Kaikeyi. Kausalya and Kaikeyi gave some portion of their Kheer to Sumitra as well. After few days, all the three queens conceived. Kausalya gave birth to Rama on the ninth day of Chaitra month at noon. Kaikeyi gave birth to Bharata and Sumitra gave birth to twins, Lakshman and Shatrughna.

Rama was the seventh Avatar (incarnation) of Lord Vishnu and he deliberately took birth on Earth, where evil ruled over the good. He protected the people of earth by demolishing evil. Lord Rama also destroyed the evil Ravana.

How is Ram Navami Celebrated?

Like every year, Rama Navami in 2017 is going to be celebrated with great joy. In Hinduism, people celebrate the festival of Ram Navmi with sheer enthusiasm and devotion. Idols of Lord Rama and his consort Sita are brought at home and placed in the small temple built in the house. Followers of Hinduism observe fast or follow a strict diet on this particular day, as stated in the Shastra. Temples are beautifully decorated with flowers and eye catching lights. The readings of the holy Ramayana are conducted in the temples and in the huge Pandals built for the Ramayan Path and Pooja.

On Ram Navmi, Lord Rama is worshipped along with his wife Sita, brother Laxman, and his ardent follower Lord Hanuman. The festival of Rama Navmi is dedicated to commemorate Lord Rama and celebrate his birthday. The celebrations start with the worship of Lord Surya early morning. Lord Rama is believed to be incarnated at noon; therefore that time holds special importance and most of the celebrations are held at midday.

The festival of Ram Navami is celebrated with sheer enthusiasm and devotion by the devotees of Lord Rama. Rama Navami is among the important festivals in Hinduism. Hindus are very much devoted to Lord Ram and consider him to be the supreme. The righteousness and virtue of Lord Ram is not hidden to anyone. He is known for his morality and supreme character. People worship Lord Ram in order to receive his blessings and walk on the right path.

Celebrate the Rama Navami with full devotion and faith in Lord Ram and receive his blessings. May you have a bright and prosperous Ram Navami. Happy Ram Navami!