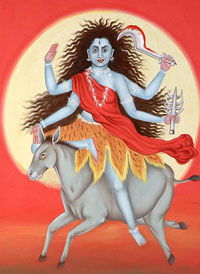 The most horrendous appearance of Durga is in form of Kalaratri. Devi Kalratri is the seventh aspect of Durga and Worshiped among Navdurga. She is believed to be the most violent Devi among Navdurga. She has dark krishna (black) complexion and her appearance is extremely fearful. Her large red eyes, open red tongue, and sobre on hand violently demolish devils and monsters. She is also glorified with name 'Kali Maa'. Devi Kalaratri has three round eyes, and scattered long black hair. She wears a bead that gleams like fire of electric power. Durga manifested herself as completely destroy the dirt and demons from existence. She is revered with name Kalratri, because she represents herself as a death of Kaal appeared like a dark night for demons. Donkey is her procession, as she rides on gadarbh. Goddess Kalaratri also has four arms. She holds sobre in her upper left hand and thorn of iron in lower left hand. Her upper right hand is in Var Mudra and lower right hand is in Abhay Mudra. Her splendor is limitless. She removes any kind of fear in life. During seventh day of Navaratri, Sadhak or devotee enters in Sahastrar chakra. After immersing oneself in Sahastrar Chakra, devotees are able to see the entrance of getting complete perfection in Universe.

However, appearance of Maa Kalratri is so dreadful, but her grace is generous toward devotees. Worshipping Maa Kalaratri on the seventh day gives abundant fruitful result. With her grace, devotees get power, position and eminent status on earth. She protects her devotees against evil influence of demons and wrong people. Worshiping her devotees get complete protection and long life.

In Hindu mythology, it is believed that it is only Goddess Kalratri who could demolish the extreme agony of devil Raktabeej. No one could kill Raktabeej, as even one drop of his scattered blood was able to form another embodiment of Raktabeej. And that way, scattered blood of Raktabeej formed other billions of Raktabeej. Devi Bhagwati manifested herself in Kalaratri, and kept a Patra (vessel) to keep and imbibe entire blood of his body. Her extreme violent appearance while destroying Raktabeej and other demons hugely terrified all organisms of Universe. But still, she is a generous Goddess for her great devotees.

During Navratri, Saptami Poojan of Devi Kalratri is considered as Maha Pooja or great worship of Goddess Durga. Delighting this deity, devotees certainly get enormous happiness, power and comforts in life. Maa Kalratri is Worshiped to destroy agony of awry influence from life of mankind. On the seventh day of Navratri Pooja, Saptami fast is observed to please this deity. Tantra-mantra practices are also performed and accomplished under blessings of this Goddess. Seventh day of Navratri pooja is envisaged as one of the great days in Durga Pooja. Worship Maa Kalaratri on the seventh day of Navratri Pooja and obtain her enormous grace. Jai Maa Kalratri!