We at AstroSage, bring you the dates of Ram Leela in 2016. Ramleela 2016 commences from October 1 and ends on October 11. Ramlila in 2016 brings you the depiction of Ramayana in front of your eyes. So, this time, don't regret if you have not read the epic of Ramayana. 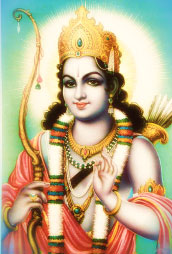 As per the Hindu mythology, Lord Rama is the seventh incarnation of Lord Vishnu. Lord Rama's greatness had been sung in preceding ages, and he is still remembered for his greatness. Ramleela enacts Lord Rama's humble greatness that made him significant in our lives. Ram Leela is enactment of the various acts of Lord Rama's life. As per the Hindu calendar, Ram Leela is celebrated in the month of September- October. Along with Ramlila, we celebrate Sharavan Navratri.

In various parts of the country, stage shows are organised depicting the various acts of Lord Rama throughout his life, in the form Ram Leela. Same is expected during the Ram Lila in 2016.

This Ramleela in 2016 will be organised to enact the life of Lord Rama. Ramlila in 2016 will again depict that good always emerges right over bad. Lord Rama is an epitome of righteousness. He is considered to be an idol for all the living beings.

Ramlila is depicted in various parts of India. Ramlila is a theatrical experience for the audience to witness. Ram Leela in 2016 will again be an event to see in various parts of the country. As during the time of Ram Leela, people will witness birth of their favorite god and his life. The depiction of Ram Lila is taken from one the most popular texts of Hindu religion, Ramcharitmanas.

Ram Leela revolves around Lord Rama and how throughout his life, he followed the path of truth and righteousness. Lord Rama is worshiped and characterised as an idol for the men on earth. Tulsidas composed the Ramcharitmanas in the sixteenth century that signified Lord Rama as a mortal being. It is believed that Lord Rama took birth on earth, to spread the message of righteousness and the value of truth. He described Lord Rama to be an ideal son, brother, friend, husband, and king.

Ramleela 2016: Significance of Ramlila in India

In a country like India, every festival is celebrated with great enthusiasm and devotion. For Hindus, Lord Rama holds a lot of significance. It is believed that people in today's time, practice the teachings signified by Lord Rama. The real significance behind the depiction of Lord Rama is that all the incidents which took place in the life of Lord Rama has imparted an important message for the mankind. Hence, this way, people are able to remember and relate to Lord Rama and his righteous nature by witnessing the events of Ram Leela.

Hopefully, now you would be able to understand, why Ram Lila holds such an important part in the life of humans and what is its real significance. Let's see what all is depicted during the Ramlila and what one should expect out of Ramleela in 2016.

During Ramlila, Rama's entire life is depicted. The Ram Lila contains episodes from Rama's birth at Ayodhya, as the son of King Dashrath and Kaushalya, and his toilful journey to be the king of Ayodhya.

During Ram Leela, the entire life of Lord Rama is recited in the form of music and poetry. Certain events of Rama life are given special focus during Ramleela performances. These events are: Lord Rama getting married to Sita and fulfilment of pledge by Lord Rama. Lord Rama accepts the exile of fourteen years to fulfill His father's pledge given to Kakayi (since then the saying came into being raghukul reet sada chali aayi, Pran jaye par vachan na jaye). This clearly means, a promise once given, can never be taken back.

Another important event which are given a lot of importance during Ram Leela is Sita's abduction during the exile period, when Lord Hanuman meets Sita in Ashok Vatika. This is followed by burning of Ravana's kingdom, Lanka, by Hanuman.

Ramlila ends with triumph of good over bad i.e. Lord Rama's victory of Ravana. This day is celebrated as Dussehra or Vijayadashami throughout the country. Vijaya Dashami is celebrated every year, spreading the message that good will always be victorious.

The entire Ramlila is enacted by a group of young boys and girls. These young boys and girls are known as Mandalis. These Ram Lila Mandalis depict the life of Lord Rama. Each and every character related to Lord Rama's life is depicted during the time of Ramleela. This depiction is specially directed and these directors are known as Vyasa. These Vyasas specially direct these stage performances, as Ramlila holds a lot of importance for the Indian audiences.

People across the country, be it children, youngsters, or old-aged persons, gather together to witness the nearest Ramlila performances. This Ram Lila in 2016, we will all witness the same gathering, which will make us relive Lord Rama once again.

Now, let's see how Ram Leela is celebrated in different parts of the country.

One of the oldest depiction of Ramlila is performed in Ramnagar near Banaras. Lord Rama's entire life is depicted near the banks of river Ganga, through Ramleela. Maharaja of Kashi started the trend of Ramlila in Ramnagar.

Lord Rama's life is depicted in a detailed manner and the performances last for 31 days. Ramlila in this area moves to various places like Ashok Vatika, Janakpuri, Lanka, and Panchvati, where permanent stages are set up for depiction of Lord Rama's life. The celebration ends with Lord Rama's triumph over the demon king, Ravana.

Hence, this Ram Leela in 2016, people will travel to Rama's age along with the Mandalis (characters) of Ramlila.

Another important place, where Ram Lila is depicted with a lot of devotion towards Lord Rama in Chitrakoot. The most famous event of Ram Leela is Bharat Milap. It is believed that Rama himself manifest in the person, who is playing the character of Lord Rama. People across the country, come and witness this event. It is also stated that post the event, people usually turn very emotional. The celebration ends on the day of Vijaya Dashmi or Dussehra, when Raavan is burnt.

Some of other places where Ramlila or Ram Leela shows are extremely popular are Ayodhya, Almora, Sattna, parts of Uttar Pradesh, Madhya Pradesh and to an extent, in Maharashtra.

If you plan to witness Ram Leela, then these are the places you must visit, as Ram Leela in 2016 will again be enacted in all the above mentioned places.

In a country like India, numerous festivals are celebrated across the country. Here, each god is worshiped with full devotion, sincerity, and spirituality. Lord Rama's birth is celebrated every year in the form of Ram Navmi and Lord Rama's entire life is a lesson to learn. The message which should be spread across people is to follow the path of honesty, truth, and righteousness. Thus, this Ram Leela in 2016, it is important for mankind to remember that good will emerge and evil will die.

During Ram Leela 2016, don't forget to share Lord Rama images & Lord Rama wallpapers. Let this Ramlila in 2016, bring Lord Rama to our land, with the establishment of virtuous values.

AstroSage wishes all it's readers a Happy Ramlila Celebrations In 2016!