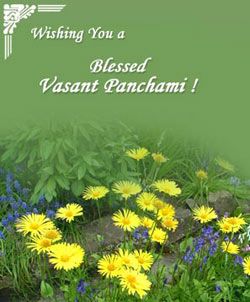 Amongst all seasons Basant (spring season) has special significance. Arrival of spring brings gaiety and enthusiasm. A special energy can be felt in the environment and mind keeps on swaying with its soft and tender nature. With the arrival of Sun in Aquarius sign, festival of spring begins. This festival stays in limelight for two reasons. One is Rati-Kaam Mahotsav. In this period, even plant and trees shed their old leaves and renovate with new ones. Fragrance of flowers and echo of Bumblebees, the entire environment starts making a man doped in ecstasy. At the time of spring season, a seductive beauty adorns the entire nature. Birds start twittering and flowers become buzzed with Bumblebees. That is the reason why this month is also known as 'Madhumaas'. The season of spring has special influence of planet Venus. Planet Venus is considered as the significator of sensuality and charm.

If seen from the angle of Astrology, Basant Panchami is the name of the fifth day of the bright half of Hindu month Maagh. Magh is also considered as the month of Gods. In this month only, Sun becomes Uttaryana and it is a universal fact that Uttarayana is the day of Gods and Dakshinayana is night. Basant Panchami is such an auspicious time (Muhurta) that is obvious (ABOOJH) Muhurta to all the believers of Astrology. On this day, events like marriage, naming ceremony and Griha Pravesh can be performed without hesitation without making any analysis with Panchang or Astrological suggestion. Apart from this, penance, worship, fast and bath have special significance in the month of Maagh. This time festival of Basant Panchami is going to be celebrated on 14 and 15 February. 5th day from Hindu calendar is rising from 14 February morning 8:19am and will run till 15 February morning 9:05am. At the time of entering in 5th day, Moon will be placed in Pisces sign. Therefore, to know the results of this Valentine's Day in 2013 from the eye of Astrology, read our article - What to do this Valentine's Day & what Not?

Kamdeva and Rati are considered as the main deity of spring season. Along with them, Lord Krishna has special significance in this season of love. That is why Kaamdeva and Rati are worshipped on this day. During Basant Ritu, a special attraction generates in nature which an incarnation of Kamdeva. Indian philosophy has also worshipped carnality (Kaam) while considering it a deity because life is stagnant and monotonous without lust (Kaam). This world cannot exist without concupiscence (Kaam). But, Kaam is a God not demon, Kaam should be decorous and followed by the rules of Vedic scriptures, instead of obscene and out of control. Arrangement of this control and modification is known as 'Grihasthashram'. Motive of Basant Panchami is to live life on the commands of scriptures and dignity.

Second main reason behind this festival is the birthday of Goddess Saraswati. On this day, Goddess of education, wisdom, knowledge and speech, Goddess Saraswati was born. Saraswati Pujan has special significance in Indian culture. Magh Shukla Panchami (fifth day of the bright half of Hindu month Magh) gives the opportunity of worshipping the Goddess of knowledge, music and art, Maa Saraswati. In ancient times, Maa Saraswati used to be summoned before the initiation of a child's studies. Since ancient days only, there has been a ritual of writing Beej Mantra of Goddess Saraswati “Ayem(ऐं)” on the tongue of the kids as their first syllable of education with ink of Saffron. Hence, the studies of the child begin after this ritual. Yet also this ritual is alive in Gurukuls and at present too, this festival is celebrated with great gusto in Gurukuls. It is believed that initiating studies on this day facilitates a child with no obstruction in education ever in future. Additionally, the child stays blessed with the boon of Goddess Saraswati forever.

The fourth and fifth houses of a birth chart are natural houses of education. Studies of a person depend upon the planetary positions of these houses only. If these houses are afflicted or contaminated, the education of the native doesn't get complete. People affected from these houses can fetch desired success by commemorating and worshipping Goddess Saraswati on the 'Prakatchya' festival, which falls on the fifth day of the bright half of the Hindu month Magh and also known as Basant Panchami. Brain becomes sharp by worshipping Goddess Saraswati on this day. Concentration power also increases. Examinations start getting clear with flying colors. Sweetness and juiciness inculcates in speech. Children suffering from speech problems get blessed with the blessings of Goddess Saraswati. Worshipping, fasting and chanting for Maa Saraswati on this day fetches the devotee grace of the Goddess.

Some special Mantras are given below, via which you may get beneficial results. Procedure of chanting these Mantras is same. Sit in front of Goddess wearing yellow clothes as much as possible. Adorn her with yellow sandalwood mark on forehead and chant any of the following Mantras as per your faith for 1, 3, 5, 7 or 11 rosaries.

On the day of Basant Panchami, Vaagdevi Saraswati is offered yellow colored food. At homes also people cook yellow food. Especially on this day sweet rice is cooked, in which almonds, raisins, cashews and allied stuff are added to make porridge. It is served in afternoon. Family members and visitors are offered yellow sweet bar. Saffron porridge is everyone's favorite. The bliss of this festival extends more with the special events like singing. On the day of Basant Panchami, all devotees not only worship the Goddess but also this day has special significance for artists. At some places, artists worship their musical instruments. On the other hand, devotees pledge for more practice and dedication. Education, wisdom, speech and knowledge can only be fetched via the blessings of Maa Saraswati. Poet Kalidas could earn name and fame by the grace of Goddess only. Great sages like Valmiki, Vashishtha, Vishwamitra, Shaunak and Vyas could become successful only by the worship of Goddess. Therefore, we should also put efforts to fetch the blessings of Goddess Saraswati.