Importance of Worshipping Lakshmi on Diwali 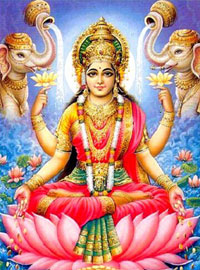 Diwali is a very important festival for Hindus. Every Hindu offers prayers to Lakshmi on the eve of Diwali to please Lakshmi for wealth and prosperity. It is believed that on the night of Diwali Goddess Lakshmi visits every home. In order to welcome her, people paint the feet of Lakshmi entering the house. People worship Lakshmi on many occasions but worshipping the Goddess of wealth on Diwali has a special significance. Businessmen worship Lakshmi and makes new account books. It is customary to offer prayers to Lord Ganesha first. For this, a temporary temple is set up in the home where the idols of Lord Ganesha and Goddess Lakshmi are installed and then prayers are offered.

Goddess Lakshmi is unsteady and does not stay at one place for a longer duration. Prayers are offered to Lakshmi with pure heart as everyone desires to her to stay at home permanently. The art of attracting Lakshmi is secret and difficult to achieve. It is because of the strict direction by Vishvamitra, who instructed that the procedures to attract Lakshmi must be kept secret and should be taught to a capable successor only at the end of one's life.

In the Ravana Samhita, Ravana has said that the devotion to Lakshmi is outstanding and he has learnt it from Kuber. Only with that knowledge, he was successful in making Lanka prosperous.

Guru Gorakhnath also described the devotion to Lakshmi as outstanding in Gorakh Samhita. Lord Krishna also stated that his devotion to Goddess Lakshmi made Dwarka prosperous.

When the ocean was churned, Lakshmi appeared by the prayers that Indra offered her. As a blessing, she told him that whoever receives the 12- letter mantra from Indra and repeats it with utter devotion during the three prayers offered every day, shall attain prosperity and wealth like Kuber.

In the Mahabharata, Udyoga Parva, 38/38; it is said that, patience, control over the senses, self control, compassion, gentle speech and having no grudges with the friends and others, one should always promote glory and prosperity everywhere.

Hitopadesha states- Whoever is enthusiastic, active, capable of doing his work, not addicted to vice and is friendly as well as grateful shall find that Lakshmi will come to reside voluntarily in his home.

In the Sharda Tilak it is mentioned- Those who wish to attain prosperity must be truthful, having sweet speech and must eat facing the West.

Once the mother of Pradyuman, Rukmani thought of the welfare of the mankind. For this, she asked Lakshmi that with what kind of people and place she prefers to reside. In the answer, Lakshmi said that she resides with the people who speak gently and do not lose their temper on small issues. She lives in the house where the residents have control over self and are generous and devoted. Moreover, they should be virtuous, generous, and religious, respect elders, pure at heart and have a forgiving nature. She resides with those women who serve their husbands, who are forgiving, truthful, balanced and live a simple life. They must respect Gods and Brahmins. She resides where Yagyas are performed, prayers are offered to God with pure heart and cows as well as Brahmins are cared. Goddess Lakshmi never leaves such homes.

The religious texts also state that Lakshmi never resides with people who wear dirty clothes, do not clean their teeth or do not take bath, eat a lot, use abusive language or sleep even after the sunrise. Lakshmi never resides with such people who wear other's clothes, or use other's vehicles, have relation with several women and live in someone else's home.

Goddess Lakshmi never resides in a house where people are lazy, short tempered, addicted to anything, immoral, egoistic and use abusive language.

In the Mahabharata, Shanti Parva, it is explained that once King Bali ate offensive food and opposed the Brahmins after eating, due to which Goddess Lakshmi immediately left his palace and the King's life was no more prosperous. Lakshmi said that she abhors those who are addicted, impure and restless. The Goddess left Bali's palace in spite of knowing that he was devoted to her.

On Diwali, the houses are cleaned and people wear new clothes. As we know that Lakshmi stays at such places that are clean and people residing in are religious, truthful and balanced, so people worship her on the day of Diwali and please her to reside at their homes. If one succeeds to please Goddess Lakshmi on the Diwali, he is blessed with mental peace, physical health and material well being.