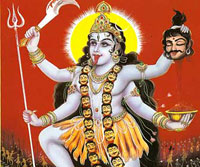 In Kalyuga, worshipping the Goddess Kali is the topmost priority for the human welfare. Rider of the whole world, imbued in each crumb, the power of the strongest Goddess is incomparable and infinite. Goddess Jagdamba is herself the ruler of entire living as well as non-living beings. Her grandeur is endless. She is the reason for the existence of this universe. In other words, she is the rider of this universe. She has countless faces, mainly she is considered to have nine faces. She has uncountable names, mainly 1008 names are known. Worshipping all the incarnations of Maa Devi boosts up the radiance of prayer and vanish the evils. Here we are going to discuss about the incarnation of Adi-shakti, that is, Kali. Maa Kali is considered as the incarnation of Maa Durga. Glorification of Maa Kali is not done through words; it is all about emotions and feelings. The incarnations of Maa Kali is considered as the remover of enemies and barriers. Maa Kali is the remover of troubles and the only Goddess to shield us. The devotee of Maa Kali cherishes all types of worldly pleasures, along with the fame for intelligence as well as becomes the partner of wealth. Maa Kali always stays kind and warm for her devotees. However, her character is considered as scary. This character of hers is defined to demolish evils. The mere presentation of her character turns out thrilling for the viewers. Therefore, worshipping this incarnation of Goddess is mainly meant for valor, conflict, war, security, and expanding effectiveness. Hence, by worshipping Goddess Kali, one can easily fetch everything desired in terms of security as well as prosperity. By just remembering her name, devotees can get rid of troubles. While worshipping her, devotees say -

Incarnation of Shakti, Maa Kali puja is performed all over India, but it is preferred more in the regions of Eastern as well as Northern India. At the time of Diwali, believers of Tantric puja put more preference on worshipping Goddess Kali. Puja of Maa Kali is performed to fulfill all desires. It is mostly done to get rid of a dangerous enemy. Mahakali pujan is ultimate to get rid of the webs of this material world and way toward salvation. Earthly organisms worship Goddess to get protection from demons and evils. Worshipping Kali give immediate results in the matters related to controversies, victory in legal disputes, defeating the competitor in competition, race, wrestling and allied fights, and victory in debate related to logical issues. One may see the difference in the celebration process of Maa Kali Pujan from region to region and time to time. At some places, this celebration starts from fourth day of the Kartika Krishna Paksha; whereas at certain places it initiates on Diwali night and is celebrated for next two days. However, from the consent of everyone's sentiment, the dogma that comes out is that Maa Kali Puja is performed at Diwali night. On the day of Diwali, where Maa Lakshmi Pujan begins from Nishithkaal, the Pujan of Maa Mahakali in performed in Mahanishita Kaal.

Make a red seat by covering a red cloth over a wooden post or small stool. Place an idol or picture of Maa Kali with Mahakali Yantra over that seat. You can make this Yantra by yourself or even get this from market. After that, worship the Goddess using red sandal, flowers and incense sticks. Perform Nyasa and meditate for Maa BHagwati in the following ways -

Tantric people imagine a horrible look of Mahakali as sitting on corpse, wearing a garland of heads, sword, trident, broken earthen utensil in one hand and human head in other with a bloody red tongue out thirsting for more blood, while meditating. For them, the meditation psalm is this:

After that, meditate again by doing Vyapaka Nyasa using main Mantra and restoring the previous position.

Generally, Mantras are chanted in the numbers of lakhs or two lakhs. There is a system of performing the following:

Mantras of Devi give faster results, if chanted around midnight. After Japa, one should recite Stotra, Kavach, and allied scripts related to Mahakali. All these are considered as the way of spiritual awakening for the devotees.