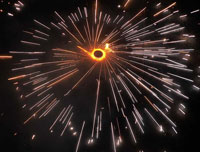 Narak Chaudas 2017 date is 18th of October. Narak Chaturdashi, the second day of Diwali festival falls on the fourteenth day of the dark fortnight of Kartik month. It is also called as 'Kali Chaudas' or 'Chhoti Diwali'. The day is celebrated to commemorate Lord Krishna for his victory over 'Narakasura'. It is the day to abolish laziness and eradicate evils from our lives and let the light of good shine on humans.

THE LEGEND OF NARAK CHATURDASHI

The legend of Narakasur is important in history as he established a vast kingdom in Assam after overthrowing the last Danava king 'Narakasura'. It was foretold that he would be killed by another incarnation of Lord Vishnu.

Narakasur became evil in the company of another Asura, Banasura. He was doped in power as he knew that there is no match to him on earth. He got all the kingdoms of earth under his control. Next, he placed his eyes on 'Swargaloka'. Even lord Indra could not withstand his assault and left the heaven. Then Narakasur became the Lord of Heaven as well as Earth. He was badly addicted to his power and in that state, he stole the earrings of Aditi, the mother of Gods. He also took some of her territory and kidnapped 16000 women.

All the Devas then went to Lord Vishnu and asked him for his help. Lord Vishnu promised the Gods by saying that he would deal with Narakasur after being incarnated as Lord Krishna.

Lord Vishnu was then born as Ladoo Gopal. Aditi, who was said to be the relative of Satyabhama, wife of Krishna, approached Satyabhama for help. When Satyabhama heard about the ill treatment with women and his behavior with Aditi, she became furious. She went to Lord Krishna to seek permission for a war against Narakasur. Lord Krishna, along with his wife, attacked the fortress of Narakasur. The battle was fierce. Narakasur tried many of his devilish powers on Lord Krishna but failed badly. Narakasur last tried his trident on Lord Krishna. He was then beheaded by Lord Krishna by his Sudarshan Chakra. Before dying, Narakasur requested that his death anniversary to be celebrated by humans on Earth every year. Thus, this day is celebrated as Narak Chaturdashi - the second day of Diwali.

It is said that Narakasura gained boon from Lord Brahma that he would die with the hands of his mother. When the war was on, Lord Krishna and Satyabhama fought with Narakasur bravely. But she was not a match to Narakasura trained skills. After few days, when Narakasur got a chance, he aimed at Lord Krishna and hurt him lightly that caused Lord Krishna to faint. Satyabhama became furious when she saw her husband being hurt. Then she doubled her attack on Narakasura and finally killed him. Before his final breath, Narakasur requested his mother, Satyabhama, as she was the partial incarnation of his real mother Bhudevi, that his death to be celebrated with colorful lights. Thus, this day is celebrated as Narak Chaturdashi or Chhoti Diwali.

The victory of Lord Krishna and Satyabhama over Narakasura brought freedom to his prisoners and honoring of Aditi. All the 16000 women were rescued and Lord Krishna married them to restore them to their former dignity.

Narak Chaturdashi is celebrated with pure heart and immense joy by people. The people wake up early in the morning and break a bitter fruit in the morning. Then, they apply scented oil or Kumkum oil on their body and after that take bath. The breaking of fruit represents the head of Narakasura and the Kumkum oil or paste symbolizes the blood that Lord Krishna smeared on his forehead as a symbol of his victory.

As the dusk approaches, people start lighting their houses with colorful lights. They also light diyas in and around the house to mark the celebration of Chhoti Diwali. People light firecrackers and do fireworks to enjoy the festival.

Diwali is a very auspicious festival for Hindus. It marks the victory of good over evil. People celebrate this festival with great enthusiasm and fire crackers for sound and lighting. All the evils are eradicated and only purity prevails on Earth.

Chhoti Diwali has its own significance and is celebrated with great enthusiasm and fervor all around. With the brightness of Narak Chaturdashi eradicate the darkness of your life and step forward to a brighter life. We wish you a very happy Narak chaturdashi 2017.

We wish you a very happy Narak chaturdashi...!!