The pious day of Apara Ekadashi in 2017 is on May 14. Apara Ekadashi is the day that promises immense wealth and prosperity, to everyone. So, if you dream about the same, just observe Apara Ekadashi fast that holds great importance. Read on to know more... 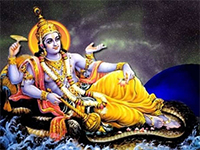 As per the Hindu Calendar, the 11th day of the Krishna Paksha (dark fortnight) of lunar month of Jyeshtha, is known as Apara Ekadashi. You can observe the Vrat (fast) of Apara Ekadashi in 2017, on the date of May 22.

Apara Ekadashi : Merits Of The Day

Once, Dharmaraj Yudhishthir asked Lord Krishna about the merits received from Apara Ekadashi. Lord Krishna, then, explained him the whole significance of the very important Apara Ekadashi, in detail. He told him that the name of the festival is Apara Ekadashi, because it is a source of gaining immense prosperity, wealth, and money for the devotees. Whoever observes the fast of Apara Ekadashi with full faith and devotion by following all the rules of the fast, he/she would gain immense favor from Lord Vishnu. This is the reason that Apara Ekadashi is considered so important, as per the ancient scriptures.

By observing the fast of this Ekadashi, one can wash up all the sins, including those which are not considered humanitarian. The sins like killing a Brahmana or a cow, speaking lie, having relations with some other woman, also get vanished away by observing the Apara Ekadashi Vrat.

Apara Ekadashi 2017: Significance Of The Day

The auspicious results that can be obtained by performing the Shraddha rituals, on the bank of river Ganga, is equivalent to the result obtained by observing the Apara Ekadashi Vrat.

We can also measure the significance & auspiciousness of Apara Ekadashi, with the following rituals: