Kamada Ekadashi 2016: The Day That Brings In Rapid Benefits!

The beneficial day of Kamada Ekadashi in 2016 is on April 17. Kamada Ekadashi is the one that gives the fastest fruitful benefits to those who observe it with dedication. On this Kamada Ekadasi in 2016, observe the fast and please Lord Vishnu to reach heavenly abode. Read on... 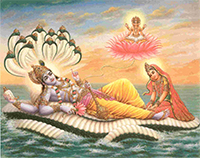 The Ekadashi that falls on the eleventh day during the bright fortnight (Shukla Paksha) of the Hindu month Chaitra is called the Kamada Ekadashi. This Ekadasi is believed to be the first Ekadasi of the Hindu New Year. The name Kamada means - 'The one that grants all wishes.' Lord Krishna is worshiped on this Ekadashi.

Kamada Ekadashi 2016: Rituals Of The Day

If you are observing the Kamada Ekadashi 2016 fast, follow all the rituals of this day as mentioned below, in order to get maximum benefits of the day.

As the part of rituals of the day of Kamada Ekadasi, one should wake up early in the morning and take bath with soil that should be taken from some pure place. After this, the devotee should recite the Satya Narayan Katha (Lord Vishnu legends). Hence, on this Kamada Ekadashi in 2016, follow the rituals with full faith and prescribed rules; thus, receiving its instant benefits.

As per the legend, there was a Gandharva couple, Lalit and Lalita, who lived in a place named Ratnapura. King Pundrika was the ruler of city. At King's court, Lalit was a singer, while Lalita was a dancer. One day, while Lalita was not in court, Lalit could not perform well, as he was missing her and hence, got distracted. He missed some beats of the songs, and when King noticed this, he became angry of Lalit. The King cursed Lalit, which turned him into a monster. Concluding the curse, Lalita and Lalit left the city and wandered in forests.

Hence, this Ekadasi has a lot of significance for those, who wishes to remove the sins and ill acts done in past life. Hopefully, this article on Kamada Ekadasi in 2016 will help you eradicate your sins and guide you to heaven, after death.

AstroSage wishes you a blessed Kamada Ekadashi in 2016!