Devi Skanda Mata is Worshiped on Fifth Day of Navratri 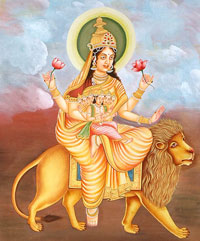 Skanda mata is the fifth aspect of Navdurga. On the blessed fifth day of Navratri Pooja, Skanda mata is worshipped. Worshippers offer great reverence to mother Skanda on Panchami of Durga Pooja. Skanda is the name given to Kumar Kartikey. Goddess Parvati is mother of Kartikey and thus revered with name 'Skanda mata'. When all Devta (deities), Rishi-Muni (saint, holymen) and Manushya (mankind) was tired from torment as well as domination of colossal giant Tarakasur, Kumar kartikey is the only almighty who demolished the tyranny of Devil Tarakasur. Being the mother of powerful deity Kumar Kartikey, mother Parvati is glorified with name 'Skanda Mata'. She is the true Goddess of endurance.

She is represented with four-arm holding six-faced infant Kumar Kartikey in her lap. Her both right and left upper hands hold lotus flower. She is also revered with name 'Padamasana devi' as she seats on lotus in state of meditation. Worshipping mother of Skanda on the fifth day of Navratri Pooja has also great significance. Her elegant appearance mesmerizes the worshippers. She is the true Goddess of purity. By offering invocation to this almighty, worshippers can travel the tranquil Universe to pacify their soul and mind. This great journey makes them realize the heavenly truth of life. They leave their sorrows behind and achieve the great and divine contentment in life.

It is believed that devotees and worshippers enter in 'Vishudh Chakra' during this day of Durga Pooja. Vishudh means undiluted. Thus, in this state, worshipper moves toward undiluted thoughts. They feel removal of impurities and tensions of outer world, and immerse themselves completely in adherence of mother Skanda. Worshiping mother Skand on auspicious fifth day of Navratra, devotees experience and realize the immense peace and pleasure in soul and mind. They become entirely free from meaningless anxieties of life and enjoy the divine happiness endowed by mother Skanda. Panchami of Navratri Pooja is completely dedicated to mother Skanda that help devotees to achieve her profound blessings. Her divine luster radiates the life of her devotees. With her grace, all true wishes are accomplished. She never let her devotees return with empty hands. In fact, her blessings are boundless that bestows real peace in life. She shows the directions toward Nirvana or Moksha. Offering devotion to this Goddess, devotees come out from dilemma of life and peacefully move ahead for salvation. Jai Skanda Mata!