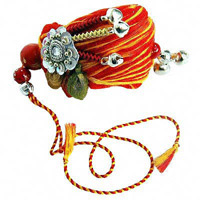 How unfathomably lovely relation of brother and sister is! And Hindi Rakhi songs or Raksha Bandhan songs truly express profound emotions of siblings. All Bollywood Rakshabandhan songs have pleasant-sounding words that wonderfully touch the heart of listeners. Sing and enjoy Rakhi songs!

Melodious music makes us alive, touches our emotions and adds rhythm in our life, and in matter of music, Bollywood has a special quality of composing meaningful songs for all occasions. For the sweet occasion of Raksha Bandhan, Bollywood has innumerable collections of pleasant-sounding Rakhi songs that are sung or played, especially on Raksha Bandhan festival. Singing and enjoying Raksha Bandhan song is one of the pleasant moments of life that inspires brothers and sisters to memorize the sweet memories of childhood. When a sister ties a sacred thread on her brother's wrist she wants him to carry the same emotions of love forever. And in such moment playing or singing any Hindi Raksha Bandhan song really adds fragrance to embellish that moment. Bollywood has innumerable collections of harmonious Raksha Bandhan songs. Raksha bandhan songs or Rakhi songs truly touch hearts of millions of people who feel special bond with their brothers and sisters.

Raksha Bandhan songs have traditionally been the part of Bollywood as well as folk culture. In many parts of India, Raksha Bandhan folk songs are performed to beautify the lovely occasion of Rakhi. You can also make this Rakhi festival beautiful by singing your favorite Rakhi song.

Sing and enjoy Bollywood Rakhi songs on this occasion of Rakhi and beautify your relations with your siblings. Have a look on some momentous pleasant-sounding Raksha Bandhan songs given below!

Melodious singer Lata Mangeshkar had sung this song in old Hindi film 'Choti Behan'. Actress Nanda dedicates this song to his brother Balraj Sahini and expresses her abundant emotions as a younger sister. This song is truly charmed by all brothers and sisters and is sung during the wonderful occasion of Rakhi.

This is another famous Rakhi song sung by Lata Mangeshkar in Hindi film 'Anpadh' that truly shows the unfathomable affection of a younger sister for her elder brother.

This Rakhi song has beautifully been sung by Mukesh and Lata Mangeshkar that praises strong bond of Raksha Bandhan that nicely unites brother and sister in a wonderful relation.

Suman Kalyanpur had sung this song in Hindi movie Resham Ki Dori. This song expresses how a sister ties her abundant love on wrist of brother in a form of sacred thread called Rakhi.

Asha Bhonsle has sung this song tremendously well in movie Kaajal. This song wonderfully reflects the profound affection of an elder sister towards her younger brother. Through this song it is expressed that a younger brother is priceless for her and like a sweet pie of her heart.

This is the breathtaking song of Lata Mangeshkar that deeply touches hearts of people. In this song a sister immensely misses her brother and tells moon to convey this of her message to her brother who is very far away to her.

This is the awe - inspiring song sung by Kishore Kumar for the most popular Hindi film of its times 'Hare Ram Hare Krishna'. Starring Dev Anand, as a brother, sings this song for his little younger sister Zeenat Aman to remind her that she is precious amongst the thousands of people. A brother wants to be present with her forever till his last breath, which is beautifully expressed by this song.

This is another Boollywood Raksha Bandhan song for all sisters who request through this song to theri brothers to must come in Raksha Bandhan, as Rakhi comes once in a year and is only festival for expressing lovely relations of brother and sister.

'Is Sansar Me Sabse Pyara Bhai Behan Ka Pryar hai' is soul touching song from Hindi movie Farishtay. This song reveals a sweet truth that the loveliest relationship in this world is relation of brother and sister.

This is another old song from movie Nayaa Kanoon that is specially played during occasion of Raksha Bandhan.

So, sing and enjoy your favorite Rakhi and Raksha Bandhan song!