Lunar Eclipse 2022 by AstroSage will provide the reader with necessary information about the upcoming Lunar Eclipse 2022 dates and the time and location where they will occur. This article also covers topics like the impact of the 2022 lunar eclipse on health, precautions for pregnant women, and much more. 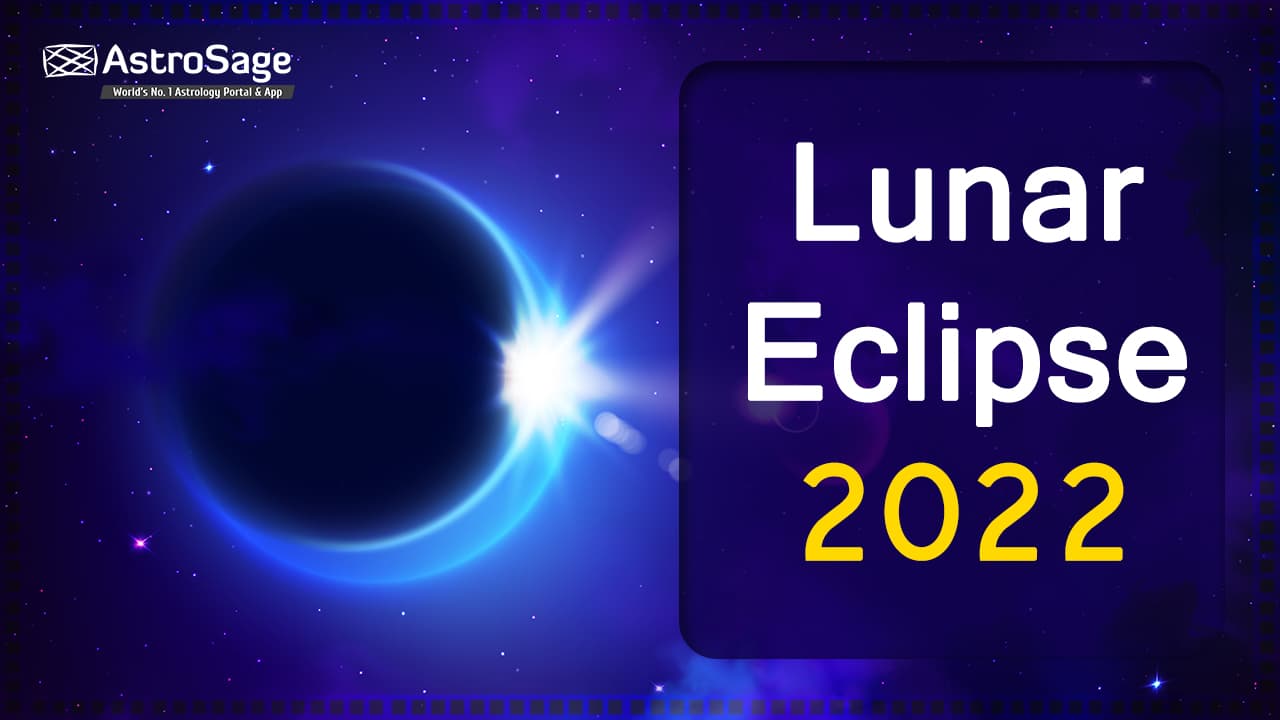 For thousands of years, before some great people could scientifically prove how the lunar eclipses occurred, humans were in awe and fear of the majestic lunar eclipse. Especially the total lunar eclipse that would turn blood-red all of a sudden and scare people the most, because they didn’t know the reason behind an eclipse and would blame gods or supernatural powers for these events. Over the years, people have become well aware of this phenomenon and how it occurs.

If you still don’t know about Lunar Eclipses, read the article below to garner all the necessary information.

Lunar Eclipse in 2022: The Phenomenon

Like is stated above, a lunar eclipse can only take place during a New Moon, but every New Moon doesn’t necessarily call for an eclipse. It is because, a perfect or partial three-way alignment between the moon, sun and the earth is a requisite for this phenomenon to occur. But since the moon’s orbit around the earth lies slightly in a different plane than the earth’s orbit around the sun, an eclipse doesn’t occur at every new moon.

During a lunar eclipse, two shadows cast by the earth fall on the moon’s surface- The umbra (complete, dark shadow), and the penumbra (partial outer shadow). The moon moves through both of these shadows in stages. Since the penumbral shadow is not prominent, the initial and last stages of an eclipse are not noticeable. So, it is when the moon is in the umbral shadow when the eclipse is the most noticeable.

The formation of the moon dates back to about 4.5 billion years ago. It is moving apart from the earth ever since by about 4 centimetres per year. Right now, the moon is at a perfect distance from the earth where the earth’s shadow can entirely cover the moon’s surface. But this won’t be the case billions of years from now because the moon would have moved very far away from the earth for this phenomenon to take place.

There will be two lunar eclipses in 2022. Check out the list below for more information-

Note- Out of the two above-mentioned lunar eclipses- none will be visible from India. Dates, Time and Places are subjected to change.

There are three types of a lunar eclipse- Total, partial, and penumbral. Out of the three, the total eclipse is considered the most dramatic one because the earth’s shadow completely engulfs the moon in this eclipse.

Let's read in detail about the three types of eclipses-

During this eclipse, the moon is shadowed (umbral shadow) by the earth. It might appear as if there is no moon in the sky during a total eclipse, but this is not the case. Some of the sunlight that passes by the earth’s atmosphere is bent, scattered, refracted, or redirected on the moon. It gives the moon a soft glow, even when the earth is completely shutting out the sunlight from the moon’s surface.

Imagine you are standing on the moon facing towards the sun during a lunar eclipse. What will you see? You will see a black disc-like structure blocking the sunlight, and this disc-like structure is the earth. Since the radiant sun is glowing behind the black disk, it creates a glowing ring around the edges of the earth. The light of this glowing ring falls on the moon during a lunar eclipse. When the eclipse reaches totality, the eclipse viewers can see the moon turn red in color. Requisite conditions for a total lunar eclipse:

When the phenomenon of the Lunar Eclipse was not scientifically proven, people around the world had different theories to explain the disappearance of the moon from the night sky. According to Ved Vyas, the Hindu Scriptures, a lunar eclipse occurs when the god of demons, Rahu, gets hold of the moon and the sun by his mouth. Since Rahu is a demon god, this celestial event represents negativity and evil energies.

It is surprising to see many of these stories turn into superstitions, and many people believe in them, even today.

Things To Avoid During The Lunar Eclipse 2022

During a 2022 Lunar eclipse, many people follow the Sutak, a period of abstention. This period consists of a set of rules that are to be followed by the observer. This period begins a few hours before the commencement of the eclipse, until after it ends. People refrain from eating during this period and break their fast only after taking a bath once the eclipse has ended. Apart from this, there are various other things that people avoid doing during the Sutak period falling on Lunar Eclipse 2022 Dates. Let’s see what these things are-

Pregnant ladies are advised to take special care during a lunar eclipse.

Ways to See Lunar Eclipses in 2022

Lunar Eclipse is a magical phenomenon, and no one wants to miss it. It is also among few events that can be sky watched with utmost ease. All you have to do is look up and enjoy the beautiful view. There is no requirement for any special equipment. However, if you want to see this phenomenon closely, with details, use binoculars or a small telescope. If the eclipse is taking place in winters, like the one falling in November this year, you can go out in open with cozy blankets and hot chocolate, and wait for the eclipse to unfold, which may take a few hours.

The longest recorded duration of a lunar eclipse in totality is 106 minutes. This can take place when the moon moves through the center of the earth’s shadow, and the moon is very close or at the apogee. Apogee is the farthest point from Earth in its orbit. The moon moves slowly when it is near apogee and requires a longer time to move through the earth’s shadow. One of the longest recorded total lunar eclipses was visible in Australia, eastern Asia, and the Pacific Ocean on July 16, 2000. It lasted for the duration of 106 minutes and 25 seconds. Studies suggest that the next longer total lunar eclipse will be observed in August 4753, which will last for 106 minutes and 35 seconds.

The color of the moon mostly turns to a beautiful red or orange during a total lunar eclipse. This color change occurs because of the sunlight that passes through the earth’s atmosphere and bends towards the moon. The other colors in the spectrum are scattered and blocked by the atmosphere, but the red color easily makes it through. This phenomenon is termed Rayleigh scattering. It is through this phenomenon only that the sky appears to be blue and sunrises and sunsets seem colorful.

We hope that you liked the article on Lunar Eclipse 2022 by AstroSage. Thank you for connecting with us!