A Solar Eclipse takes place when the moon casts a shadow over the Earth by coming in between the Sun and the Earth. This phenomenon can only occur during a new moon phase, when the moon passes between the sun and the earth directly, making its shadow fall on the earth’s surface. The alignment of the sun, moon, and earth gives rise to different kinds of Solar Eclipses. 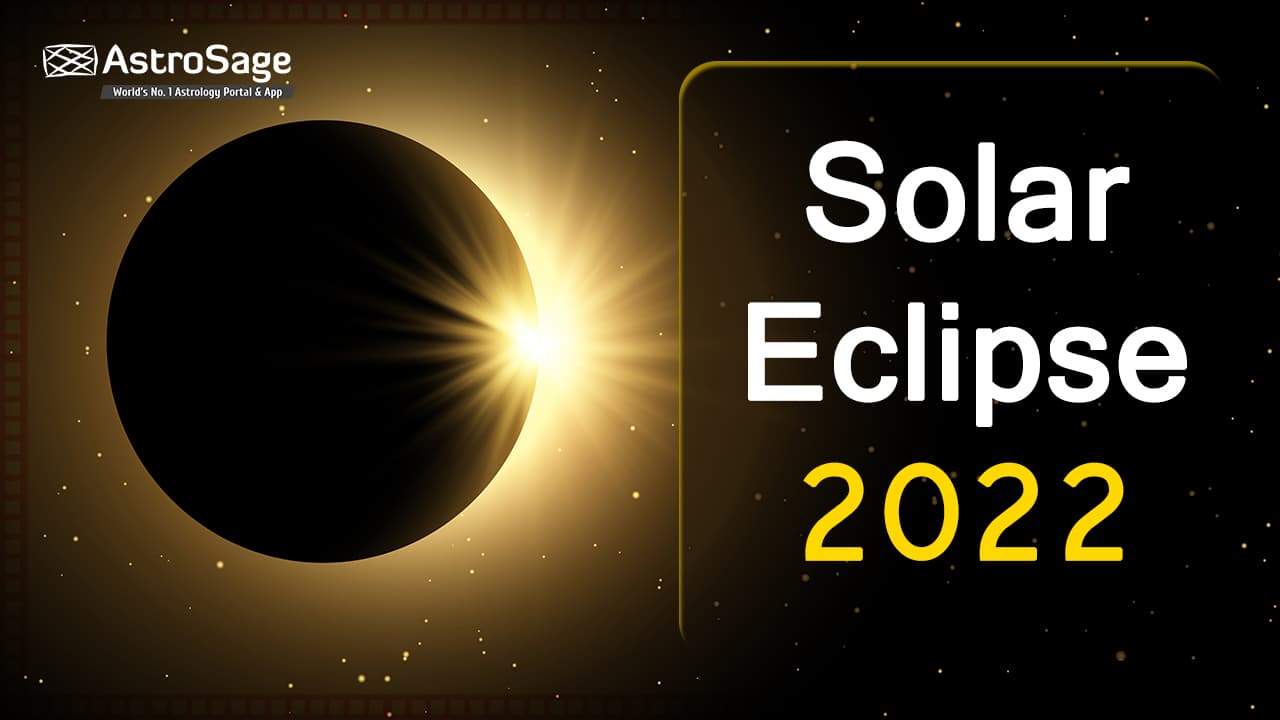 A solar eclipse is one of those events that leave you awe-struck. In those brief majestic moments, nature appears to be supernatural. As beautiful as it appears in photographs, people don’t want to miss this enchanting moment and use safety gears and filters to witness this miraculous event with their own eyes.

However, people consider a solar eclipse upsetting as it disrupts the natural course of nature by making the day appear to be as night. But historically, an eclipse has acted as a time of positive change and exponential growth, internally and externally, alike. While the moon is believed to be associated with human subconscious desires and emotional lives, the sun represents human concentration on personal desires, accomplishments, and external self. It also denotes self-expression, personality, and how we interact with others. A solar eclipse provokes positive external changes and pushes people to achieve their dreams.

Types of Solar Eclipse in 2022

There are four kinds of solar eclipse- total, annular, partial, and hybrid.

The sun is about 400 times bigger than the tiny moon. But, the moon is 400 times closer to the earth than the sun, and this is why it becomes possible for the beautiful accident called solar eclipse to occur. When the new moon is at a distance from the sun where it is in a perfect alignment, it appears as if the moon is completely blocking out the radiant sun. This phenomenon of a total solar eclipse takes place on the earth somewhere around every 18 months on average.

There are two types of shadows- Umbra and Penumbra. Umbra is the densest part of the eclipse shadow. It is the part where the entire sunlight is blocked out. Umbra takes the form of a dark, slender cone. The Penumbra, on the other hand, surrounds the Umbra. It is lighter than the umbra, and its funnel-shaped shadow blocks out the sunlight partially.

The moon casts its umbra shadow upon the earth during a total solar eclipse and this shadow can obscure one-third of the earth’s surface within a matter of few hours. Locations falling in the path of umbra witnesses the sun’s disc blocking out by the moon’s dark shadow. During this time of totality when the sun is entirely covered by the moon’s shadow, the delicate outer layer of the sun, called the corona, is unveiled. Most total solar eclipses are of short duration, but they may last for as long as 7 minutes and 3 seconds.

During a partial solar eclipse, only the penumbra, the partial shadow passes by us, and not the umbra. It results in the visibility of a part of the sun during the eclipse. However, how much part of the sun will be visible depends on different circumstances.

How much sun is being blocked by the moon will depend on your location on the Earth’s surface. However, a partial solar eclipse is visible from a distance of many hundreds of kilometers wide.

In an annular eclipse, the tip of the umbra shadow does not reach the earth’s surface. In such a situation, the theoretical continuation of the umbra, the antumbra, hits the ground, and anyone witnessing this phenomenon can see an annulus structure around the moon. It is also popularly known as the “ring of fire”.

Also known as annular-total eclipses, these eclipses are a rare sight. When the moon’s distance is reaching its limit for the umbra shadow to hit the earth’s surface, this special type of eclipse is observed. Mostly, a hybrid eclipse begins as an annular eclipse because the tip of the umbra is unable to hit the earth completely. It then takes the face of a total eclipse, and then finally becomes annular again by the end of the eclipse.

The hybrid, annular, and total eclipses are also known as “central” eclipses, as the moon during these phenomena appears to move directly in front of the Sun. Out of all the solar eclipses, only 5% are hybrid, whereas the total eclipse takes up about 28%, partial 35%, and annular 32%.

There will be two solar eclipses in the year 2022-

Note: Out of these two, only one partial solar eclipse, falling on October 25, 2022, will be visible from India. Dates, Time and Places are subjected to change.

The information about this solar eclipse are as follows-

A solar eclipse does not take place on every New Moon because the moon's orbit is inclined over 5 degrees to the earth’s orbit around the sun. This results in the shadow of the moon passing either above or below the earth’s surface most of the time, so a solar eclipse doesn’t take place. But the new moon must come in alignment with the sun, at least twice a year. The point where the sun and the moon come in alignment is called a node. This node determines whether the eclipse will be partial or central.

These alignments are much organized, given the fact that an eclipse always repeats itself/returns after a particular time interval. This interval is known as Saros Cycle. Saros means “recurring”. One Saros cycle equals 18 years and 11 1/3 days. Following this interval, the moon relative to a node and the relative positions of the sun is almost the same as before.

The first solar eclipse ever recorded was four millennia ago. According to a Chinese myth, it was believed that the sun was blocked by a Dragon who tried to consume it. It was the court astronomers’ duty to frighten the dragon away by adopting different means like beating drums, shooting arrows, and making scary loud noises.

There is a Chinese book that is an account of two court astronomers named Hsi and Ho, who were unaware of the solar eclipse, devoured in alcohol before the commencement of the event. They were punished for their irresponsible behavior by getting beheaded by the fourth emperor of the Xia dynasty, Zhong Kang. This event took place on the Solar Eclipse of October 22, 2134 B.C.

The biblical scholars also believe that in the book of Amos 8:9, the words “I will cause the sun to go down at noon, and I will darken the earth in the clear day” refers to an eclipse observed on June 15, 763 B.C.

In ancient Hindu mythology too, the solar eclipse has great significance. The legend says that a sly demon named Rahu wanted to attain immortality by consuming the nectar of the Gods. Rahu, disguised as a woman, tried to attend Gods' banquet but was identified by Lord Vishnu. He was punished by getting promptly beheaded. It is believed that the shadow on the sun is Rahu’s decapitated head flying across the sky that turns the Sun dark during an eclipse. Some people also believe that Rahu successfully stole a sip of the nectar, but before the elixir could pass through his throat and reach his body, he was beheaded. The eclipse occurs when Rahu tries to eat the sun, but the sun reappears because Rahu has no torso. It is also considered a very disturbing explanation for this majestic event.

In astrology, the sunlight is a representation of energy and life. There are different facts and myths associated with a Solar Eclipse. While not all the statements are backed up by science, it is always good to know about the intensity and power of an eclipse. Mentioned below are five things that a solar eclipse is believed to do to your body and health.

Spiritual research has concluded that a solar eclipse can make a human feel tired and sick. People are also advised not to make important decisions during an eclipse because of the impact it has on their mood.

According to some myths, it is believed that children can be born with diseases or abnormalities under the influence of a solar eclipse. It is why pregnant women are asked to take precautions during this time. Even though there are no scientific shreds of evidence to support this theory, many people still tend to believe in it.

Looking at the sun directly can be extremely dangerous, eclipse or no eclipse. But special safety measures should be taken during a solar eclipse. This theory is no myth and is scientifically approved. To keep yourself away from this miraculous sight can be tough, but it is a sensible thing to do. If ever you decide to look at an eclipse, make sure you use proper filters, or the harmful sun rays can damage your retina permanently or even cause blindness.

It is believed by some people that a solar eclipse can meddle with the digestive system. This is why; many people suggest having light meals or fasting before and during an eclipse.

Many people are of the view that solar eclipse has psychological effects on humans. Studies suggest that people see unusual dreams, feel agitated, or even face relationship difficulties during this time.

According to some traditional beliefs, it is said that a Surya Grahan or the solar eclipse is inauspicious for pregnant women as the evil forces are active during this time. Make sure to take adequate precautions if you are going through a pregnancy.

The solar eclipse has an impact on nature too. People experience strange things during an eclipse depending upon their location and the totality of eclipse they observe, for example-

NASA has concluded that there will come a time in the future when there will be no total solar eclipses. It will be in about 600 million years from now. The moon is slowly moving far away from the earth because of its increasing orbit. It will result in a timeframe that will be inadequate to cover the sun entirely; hence no solar eclipse will occur. However, people will continue to observe partial eclipses even after 600 million years.

We hope that you liked the article on Solar Eclipse 2022 by AstroSage. Thank you for connecting with us!