Purnima 2023, which according to Hindu Panchang, comes every month on the Antim Tithi (last day) of Shukla Paksha. Apart from this, one of the reasons behind this is that every month there is an essential Hindu fast which is celebrated on Purnima day. 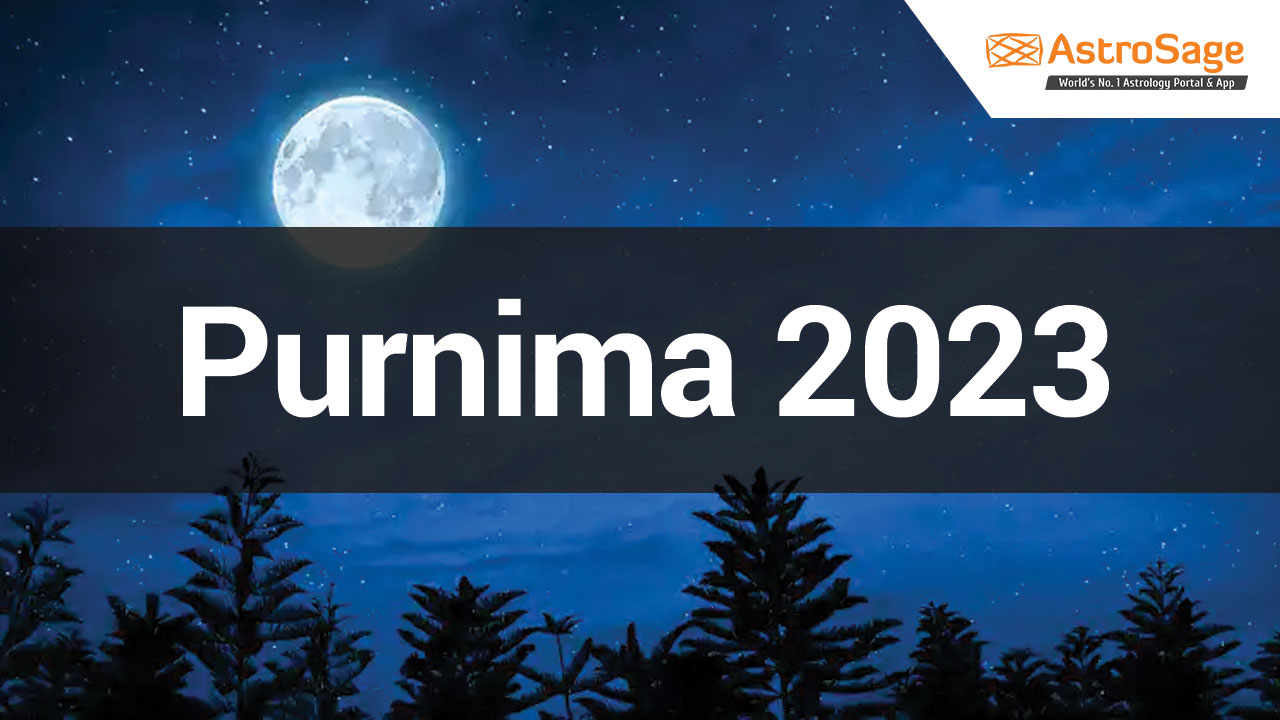 There are different names for Purnima 2023 in different places. Somewhere, it is called Pournima and at other places it is called Purnmasi. But despite the different names, the importance of this day is considered the same everywhere. On the day of Purnima Tithi, there is a ritual of doing charity, donations, virtues, puja, recitation, and fasting. That is why on this day, many people go on pilgrimages and take baths in holy rivers and do charity according to their capacity.


Are you worried about your future, get remedies from Best Astrologer On Call!

In this Purnima 2023 special article by AstroSage, we will tell you all the Purnima Tithi that are falling this year 2023. Also, here, let’s understand the importance of Purnima Tithi from the astrological and scientific point of view, when will Purnima Tithi will fall this year 2023 and what is their time duration, we will also through some light on the complete details of Puja and Fasting rituals that are going to happen on this day.

Before we move ahead and discuss the dates of Purnima, let's understand when Purnima 2023 will be observed this year. We are here to provide you with the complete details for the same. Here, you will get the information about the Purnima Tithi according to the month.

Significance Of Purnima 2023 From Astrological & Scientific Point Of View

If we talk about the significance of Purnima Tithi from an astrological and scientific point of view then it is said that many famous personalities were born on the day of Purnima and will celebrate their birthdays on Purnima 2023. Moreover, there are some other auspicious and important festivals that are celebrated and that is why there is a huge significance of the Purnima Tithi in astrology. Apart from this, on Purnima day, the moon is fully visible, that's why it has a direct impact on the mind and soul.

Now, if we talk about the scientific importance then, scientists believe that the moon attracts water towards itself and this thing is not hidden from anyone that there is approximately 70% water in a human body and this is why it is usually seen that on the day of Purnima there are many changes that take place in the behavior of a person.

According to the future scriptures, on the day of Purnima 2023, if any person visits pilgrimage and worships god then all his committed sins in a previous life and the present life will vanish. Although, if you cannot go on a pilgrimage then, add a few drops of Gangajal in regular water and take a bath in that water, and you will get good results.

Many people observe fast on Purnima . So, let's understand some of the important facts related to the Purnima fast that one should consider.

Those people who observe fast on Purnima 2023 should start observing this fast one day before Purnima i.e, on from Chaturdashi Tith itself. However, it completely depends on the day from which the Purnima Tithi begins. If Purnima Chaturdashi begins then it depends on whether Purnima starts from Madhyahna.

It is believed that Chaturdashi Tithi should not exceed the Madhya Kaal or Madhyahna or else it pollutes the Purnima Tithi.

There is a huge significance of Tithi in astrology. Tithi is the connection between the sun and the moon. For every 12 degrees, the moon comes ahead of the sun or moves towards the sun and creates this one tithi. One Lunar month is divided into two groups of dates. One starts from Amavasya and lasts till Chaturdashi or Purnima and the other one begins from that Purnima till the next Amavasya. As the moon slowly starts moving away from the Sun, the formation of new tithi takes place.

Every 12-degree position leads to the change of Tithi. When the sun is diagonally opposite to the moon, the moon is fully visible from Earth and that phase is known as Purnima.

That means, in Amavasya, we calculate the Shukla Paksha and when the moon starts decreasing from the latter half of the Purnima, then it is calculated as Krishna Paksha.

According to Hindu culture and Vedic astrology, Purnima day is counted in the list of auspicious days, Apart from this Purnima night is considered to be a very positive note. This is why on this day there are different religious activities and rituals performed.

On this day with many specialties, many people observe fast and pray to god for bringing good luck and positivity into their lives. It is believed that fasting on the day of Purnima makes one’s mind and body spiritual, brings positivity to their life, and calms down their mind.

In Hindu astrology, there is a huge significance of Purnima 2023. When we talk about Purnima then the ruler of the day is the moon. Water is the element of Purnima. The ruling planet of Purnima is Saturn. Out of 5 divisions, Purnima comes at the 1st position.