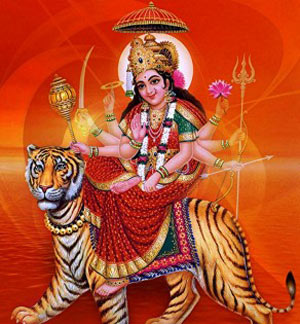 Durga Pooja 2013 date is 09 October. It is also known as Navratri. The Hindu festival of Navratri, which extends for nine days, is celebrated with gusto in different regions of the country. In the eastern state of West Bengal, the festival takes the shape of Durga Puja, when the devotees of the deity celebrate the triumph of good over evil.

Navratri Vrat or Navaratri Vratam is an important fast observed by Hindus during Ashvin (September â October). It is believed that those devotees who perform Navratri fasting will find happiness on earth and will receive âmoksha.â Legend has it that, how to observe the Navarathri Vrat was once narrated by Goddess Durga to one of her ardent devotee. The Vratam is observed by both men and women and Navratri mantra is repeated during the period.

Fast is observed by people for seven or eight days, depending upon when they want to conduct the Kanchika Pujan (when young girls are worshipped).People follow a specific diet for Navratri, if they haven't observed a nirahar (waterless) fast. Most people nowadays perform partial fasting. They would abstain from non-vegetarian food, alcohol and those dishes that are made of common salt or any kind of spice. Singhare ka atta (kuttu ka atta) is used to prepare rotis or puris, for the fast. Some devotees only observe fast during three days i.e., first fast during any one of the first three days and second fast during any one of the next three and last in any one of final three days.

Beverages like tea, coffee and milk are allowed on Navratri. Dishes made of sago and potato is generally consumed by the people, when they observe fast on Navratri. Sendha namak (rock salt) is used instead of common salt, for cooking on the festival. All fruits and foodstuff made of fruits are eaten during the seven days. Nowadays, ready-to-eat snacks are available in the stores, especially prepared for Navratri. In addition to this, certain restaurants in the northern parts of India would offer special menu for the people, who have observed fast on Navratri.

After seven days of fasting, people would break their fast on the eighth day - Ashtami - by worshipping young girls. The ritual of offering prasad to the young girls is called Kanchika Pujan. As per the tradition, puris (deep fried Indian bread), halwa (sweet dish made of suji) and Bengal gram curry are served to the young girls, called upon by the people who have observed fast. After seeking the blessings of the young girls (kanchikayen), the devotees would break their fast by consuming the prasad (puri, halwa and sabzi) that they have prepared for them. While this is the tradition followed by majority of people, Navratri fast is also broken on ninth day (Navami), wherein the fast is observed until Ashtami. The same procedure is followed in that case as well.

How to Perform Navratri Rituals?

A Kalash is prepared at home and the water is changed daily for nine days. The kalash is placed on grains on raised platform or in the Puja room. Goddess Durga is worshipped during the first three days, Goddess Lakshmi for the next three days, and Goddess Saraswathi during the last three days. (Some people make clay figures of the Goddesses during the period).
Each day fresh flowers and fruits are offered to the Goddess. Arati is performed and bhajans are recited.
The Mantras and Bhajans to be recited
Devi Mahatmya (Durga Saptashati) and Sri Lalita Sahasranama are recited during the period. The important Navratri mantra is 'Aaim hreem kleem chamundayai vichche.'

Some devotees conduct special homas and pujas during the period. On the ninth day, all books, pen and whatever implements that a person uses for his/her livelihood is worshipped and is not touched on the day.

On the tenth day, that is the Vijayadashami day in South India, especially in Kerala, young children are initiated into the world of learning.