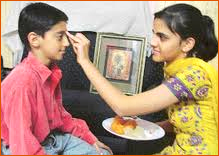 Bhai Dooj or Bhaiya Dooj is a Hindu festival celebrated on the last day of 5 day long Diwali festival. Bhai Duj is the second day of the bright fortnight or Shukla Paksha in the Hindu month of Kartik. In 2017, Bhai Duj will be celebrated on October 21. On Bhai Dooj, sisters pray for the long life of their brothers by performing the Tika ceremony, in return the brothers give gifts to their sisters.

The legend has it that on this particular day, Yama, the God of death, visited his sister, Yami. Yami put the tilak on her brother's forehead, garlanded him and fed him special dishes that she cooked by her own hands. As they were together after a very long time, they ate together and talked with each other to their heart's content. Yamraj gave a special gift to his sister and in return Yami also presented him a gift that she made by her own hands. That day Yama announced that whoever receives tilak from his sister on this particular day will enjoy long live and prosperity. Due to this reason, Bhai Dooj is also known by the name of Yama Dwitiya.

On Bhai Dooj, sisters invite their brothers for delicious meals that include their favorite dishes. The ceremony is about the duty of a brother to protect his sister along with the blessings of the sister for her brother.

The ceremony is held in a traditional style. Sisters perform aarti of their brothers and apply red tika on their forehead. The tika ceremony on the occasion of Bhai Duj signifies the prayers of a sister for the long live and prosperity of her brother. In return, brothers give gifts to their sisters and it may also include cash.

In some parts of India, women who do not have a brother worship Lord Moon instead. They apply Mehendi (Henna) on their hands as a tradition.

How is Bhai Dooj Celebrated?

The festival of Bhai Dooj is celebrated in different ways at different places. Bhai Phota in Haryana is celebrated with great fervor. The ceremony consists of many rituals that also include a grand feast for the brothers. Sisters and brothers look forward to the festival with great enthusiasm. Girls apply beautiful designs of henna on their hands and prepare delicious dishes for their brothers.

On that particular day, brothers come to their sister's home and the ceremony begins with an Aarti. A tradition is followed on Bhai Duj in which coconuts are also worshipped and presented to the brother by his sister. The sister applies tilak on her brother's forehead and feeds him handmade delicious sweets. She also gives him blessings for long and happy life. Gifts are exchanged between the brothers and sisters.