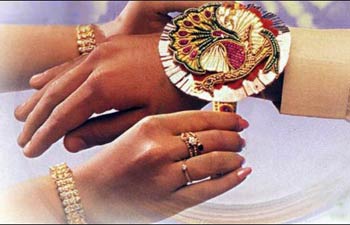 Raksha Bandhan in 2017 will be observed on 7th of August. This festival signifies the strong bond filled with love and care between a brother and a sister. It is marked on a full moon day, i.e. Purnima, in the Hindu month Shravana. It is also known as Rakhi Purnima as this day falls on the Shravana Purnima. Also called as Rakhi or Rakhri in different parts of India. To know more, read on this article..

The festival is observed by Hindus and some Sikhs also. The ceremony of Raksha Bandhan comprises mainly of tying a sacred knot of Rakhi by a sister to her brother. The knot symbolizes the love of sister to her brother and her prayers for his well being along with a lifelong vow of brother to protect his sister throughout his life. The festival of Raksha Bandhan falls on the full moon day or Shravana Purnima of the shravana month, according to Hindu calendar.

The rituals of the festival include tying Rakhi, a sacred thread, on the brother's wrist by his sister. The Rakhi or holy thread comes in many colors and designs and girls can choose over a variety of threads of their choice. The brother gives a gift and even money in return to his sister. The brother also takes a vow to protect his sister in every stage of life and in any circumstances. Sister presents sweets to her brother, applies tilak (vermillion mark), does Aarti and blesses her brother with long and successful life. The sisters also tie Rakhi to their male cousins and follow the same rituals as done with their own brothers. The brothers commit to a lifelong protection of their sisters in every situation.

You can also make this festival even more bright by setting Raksha Bandhan wallpapers as your desktop and laptop background.

While celebrating Raksha Bandhan, it is a good idea to know the legends associated with this festival.

The legend of Krishna and Draupadi

The legend comes from the ancient Mahabharata concerned with Lord Krishna and Draupadi, wife of the Pandavas. She once torn a strip of her saree and tied it on the wounds of Lord Krishna that he got in the battlefield. Seeing the dedication and love of Draupadi, he declared her as his sister and vowed to repay it whenever needed. Draupadi was married to the great five warriors, the Pandavas, but still she relied on Lord Krishna. Yudhisthira lost his wife Draupadi to Kauravas during a match of gamble. She was then subjected to Cheer-Haran. Her saree was stripped off in front of the whole assembly, but then Lord Krishna emerged and kept his vow of protecting her always. Lord Krishna extended her Saree through divine means that made the saree to be never ending. The honor of Draupadi was saved as the saree could not be removed. In this manner Lord Krishna kept his vows of protecting Draupadi and protecting her dignity in any situation.

The Legend of King Bali and Goddess Laxmi

According to this legend, King Bali, the demon king, was a great devotee of Lord Vishnu. Lord Vishnu had taken up the charge to safeguard his kingdom. He left his own abode in Vaikunth. Goddess Lakshmi wanted to be with Lord Vishnu. She went to the kingdom of Bali disguised as a woman to seek shelter till her husband came back.

During the celebration of Shravana Purnima, Goddess Lakshmi tied the sacred yellow thread to King Bali. Upon being asked, she disclosed who she was and for what purpose she was there. The king was touched by her benevolence for his family and her purpose. He then appealed Lord Vishnu to accompany her. He gave up all he had for the Lord and his dedicated wife.

Since then, yellow thread was made popular for the Raksha Bandhan ceremony.

It is said that since then it has been a tradition followed by brothers to invite sisters in Shravana Purnima for the Raksha Bandhan. Then the ceremony of tying Rakhi on the wrist of brother is followed along with other rituals.

The celebrations of Raksha Bandhan last for a day. Various types of sweets are prepared and girls get ready for the ceremony. The festival gives a chance to brothers and sisters to share love and respect for each other.