Narak Chaturdashi is celebrated to commemorate the triumph of good over evil. According to our Scriptures, Satyabhama, along with Lord Krishna, killed the demon Narakasura. Every year, this day is observed on the 14th day of Krishna Paksha in the Hindu month of Kartik. It is also known as Kali Chaudas, Narak Chaudas, Narak Puja, or Roop Chaudas. According to the Gregorian Calendar, it will be marked on 18th October. Read on to know more... 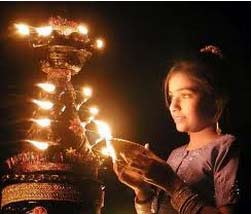 Now, let's know when Narak Chaturdashi will be celebrated in the year, 2017, according to Hindu calendar.

Now, we will discuss each and every reason, which signifies the festival of Narak Chaturdashi, along with its legends.

Why To Celebrate Narak Chaturdashi?

Following are the legends associated with the festival of Narak Chaturdashi:

According to the ancient Hindu texts, Mahabali had achieved enormous popularity due to his judicious and benevolent nature towards his subjects.

His power soon extended to the heavens. It was presumed by Aditi, the mother goddess that Mahabali would soon be dominating both the heavens and the earth. Aditi requested Lord Vishnu to stop his dominance. In response, Lord Vishnu decided to teach him lesson in the guise of a Vamana or dwarf. When Vishnu visited Mahabali's kingdom as a Vamana, Mahabali was performing a ritual.

Being courteous, he asked Vamana Vishnu about a wish that he would desire. Lord Vishnu asked for three parts of land parallel to his three footsteps. His wish was granted.

As part of his granted wish, Vamana Vishnu grew up in gigantic size. He claimed the earth with his first step and his second step claimed the heavens. Still the third step was left to be fulfilled, but there was no other piece of land left that owed to Lord Vishnu. Mahabali asked him to place his third step upon his head. With Lord Vishnu's third step upon Mahabali's head, Mahabali was sent down to Sutala (a heavenly underworld).

Since then, Narak Chaturdashi is celebrated in honor of King Bali.

Narak Chaturdashi : The Legend Of Narakasura

The victory of Lord Krishna over Narakasura is believed to be another legend associated with Narak Chaturdashi or Kali Chaudas.

As per Hindu mythology, Narakasur (ruler of Pragjyotishpur) had defeated Lord Indra and captured sixteen thousand daughters of lords and saints in his harem. Adding to his sins, he also insulted Aditi (mother goddess) by snatching away her magnificent earrings. Ironic to his acts, he was predicted to die in the hands of a female power.

To bring Narakasura demise, Satyabhama (Lord Krishna's wife) indulged in a battle with him, while Lord Krishna was the charioteer. Naraka was beheaded with this divine intervention and the sixteen thousand daughters were freed from the prison.

Now, as you know why to celebrate Narak Chaturdashi, let's take a look at how to celebrate the festival of Kali Chaudas.

How To Celebrate Narak Chaturdashi?

Following are some of the celebration patterns of Kali Chaudas:

In South India, devotees wake up early morning and take a holy bath. Then, they prepare a paste, which is a mixture of KumKum (vermilion) in oil. The paste symbolizes blood and they have the tradition of breaking a bitter fruit, that represents beheading the Demon Narakasura. The paste is then applied to foreheads.

Kali Chaudas is observed in Bengal on this day. Kali Chaudas is celebrated to honor Maa Kali on her birthday. Idols of the deity are installed in Pandals (temporary structures) and firecrackers are burnt on Kali Chaudas. In Bengal, it is also known as Kali Puja, as on this day, Maa Kali is venerated.

In Goa, effigies of Narakasura are burnt before the sunrise. The effigies in Goa are made up of paper filled with grass and firecrackers. The Goans take a scented oil bath on Narak Chaturdashi before beginning the proceedings. Similar to South India, here, a bitter berry called Kareet is crushed under feet. This symbolizes the death of Narakasura.

Naraka Chaturdashi is the perfect day that precedes the Badi Diwali (main day for Diwali celebrations). Narak Chaturdashi or Kali Chaudas depicts the destruction of evil; thereby, helping in the sustenance of mankind on earth. So, adorn yourselves to burn into ashes the negativities around you.

AstroSage wishes you all a Happy Narak Chaturdashi..!