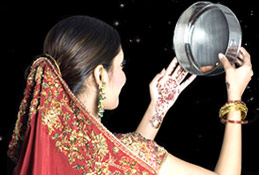 There are several legends associated with the prominent festivals in India such as Karva Chauth. Every festival has its own importance and celebrated for a particular reason or considering some stories that said to be the reason for celebration. Karwa Chauth is a very prominent festival being celebrated in India by the married women. The women who are married, fast on the fourth day of Krishna Paksha after the full moon according to the Hindu lunar calendar in the month of Kartik.

There are many stories and legends associated with Karva Chauth. Here are few:

The legend of Draupadi

The fast of Karva Chauth can be dated back to the times of Mahabharata. It is said that even Draupadi kept the fast of Karva Chauth. The story is - once Arjuna went to Nilgiri Mountain for Tapa. Draupadi started finding herself in problematic situations being alone. Even Arjuna was not beside to protect her, so she thought of some remedy. For this, she prayed to lord Krishna and he appeared before her. She asked for a remedy from lord Krishna.

Krishna said, "Once Parvati ji too asked the same question to lord Shiva. For which he answered that the fast of Karva Chauth can effectively remove all the problems that come in marital relationship. It also brings a balance in Pitta.

Then Krishna told a story to Draupadi- once there was a religious Brahmin who had 7 sons and a daughter-Veeravati. When she got married, she fasted on the fourth day after moon in the month of Kartik. However, she started feeling extreme hunger before the moonrise. Her brothers could not tolerate the distress of their loving sister and hence, one of them climbed up a tree and placed a lighted 'Deep' in such a manner that it looked like a moon behind the tree. Veeravati happily offered the water to moon and ate food. As she finished eating, her husband died. She started crying and yelling bitterly. Indrani was on her way with dancers. On hearing the sound of cry, she went to her and asked the reason of her sorrow.

Veeravati told her the entire story. Indrani then revealed the reason of her husband's death and how she was tricked by her brothers. Indrani then instructed her to repeat the fast of Karva Chauth with complete devotion for 12 months. She asked her to fast on very 'Chauth' of a month and on the day of Karva Chauth worship lord Kartik, Ganesha, Shiva and Gauri along with moon. She was instructed to offer water to moon and only then to open her fast. When Veeravati repeated the fast with utmost devotion and fasted on Karva Chauth following every ritual, Yama was compelled to restore the life of her husband.

Then Krishna told Draupadi to fast on Karva Chauth with complete devotion following all the rituals. This will certainly remove all her worries and endow her with happiness, prosperity and wealth. Then Draupadi also fasted on Karva Chauth that resulted into the victory of Pandavas over Kauravas in Mahabharata.

The legend of Karva

Once there was a woman named Karva. She was very loyal and devoted to her husband. One day her husband went to take bath in the river, where he was caught by the crocodile. She went to help her husband and tied the crocodile with a cotton yarn and then went to Yamraj.

Yamraj asked the cause of her distress. She told him that her husband has been caught by a crocodile. She begged to take the crocodile to the 'Narak' and asked for a long life for her husband. Yama refused to do so. Karva then threatened to curse Yama. Yama got afraid and went with Karva to her place where crocodile held her husband. The crocodile was then killed by Yama and he granted the wish of Karva. Her husband was blessed with long life and while retreating he said- "I will protect the life of the husband of every women who will fast on this day." The day on which this incident took place was the fourth day after the full moon in kartik month.

Therefore, women observe fast on Karwa Chauth and pray for long life of their husband.