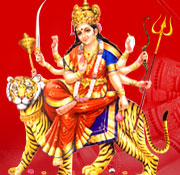 Chaitra Navratri will be celebrated from March 28 to April 5 in 2017. Chaitra Navratri, also known as Vasant Navratri, is observed in the Hindu month of Chaitra. The 9th or the last day of Navratri is celebrated as Ram Navami. According to our Scriptures, navratri hold a special significance in a Hindu's life. To know more details of this occasion, keep reading.

Dates of Chaitra Navratri in 2017

Celebration of all Navratri in a year is almost same. There is a special event followed by Hindus during Vasant Navratri and Sharad Navratri. It is of feeding little girls, below the age of nine, considering them the symbol of Goddess Durga and these girls are known as 'Kanjaks' in Haryana and Punjab and ''Kanya'' at many other places. This event is performed on the eighth day and some people also perform it on ninth day. Apart from food, people also offer money and many other forms of gifts.

Chaitra Navratri in 2017, like every year, is going to be celebrated during Basant Ritu (spring season), which is the time of March - April. That is why this festival is also called Vasant Navratri or Basant Navratri.

While celebrating Chaitra Navratri, one should also know about the legend associated with this festival. Long ago, King Dhruva Sindhu was killed by a lion while hunting. After this the preparations were made to crown the prince Sudarsana. But, there were many eyes behind the throne. These eyes were of King Yudhajit of Ujjain, father of Queen Lilavati, King Virasena of Kalinga and father of Queen Manorama. Each one of them wanted the throne of Kosala for their grandsons. Hence, they all fought with each other. King Virasena died during the battle. On the other hand, Queen Manorama fled to the forest with prince Sudarsana and a eunuch. They took the shelter under the protection of Rishi Bharadwaja. Finally, King Yudhajit won and crowned his grandson Satrujit at Ayodhya, the capital of Kosala. After that, he went out to look for Manorama and Sudarsana. On the other hand, Rishi promised them that he always protects those who come to his shelter. This made Yudhajit furious. He thought of attacking the Rishi, but his minister explained him the hidden truth behind the Rishi's statement. Being convinced, Yudhajit returned back.

One day, son of a hermit approached Rishi's place and called eunuch by his Sanskrit name 'Klebba'. The prince heard the first part 'Kli' and started chanting 'Kleem'. This syllable was a powerful mantra, actually the Beej Mantra of the divine Goddess. Due to which, prince got blessed with peaceful mind and grace of Goddess. His continuous utterance forced Goddess to show up and hence she appeared to him. She blessed him and offered him divine weapons and inexhaustibility.

Once, the emissaries of Banaras King were passing by the Asharam of Rishi. They saw the prince and recommended for the daughter of King of Benaras, princess Sashikala.

The choosing ceremony was organized and Sashikala accepted Sudarsana at first sight. They got married. Due to this, King Yudhajit started fighting with King of Benaras. Devi being the protection to Sudarsana helped him. Goddess turned Yudhajit and his army to ashes. Further, Sudarsana with his wife and father - in - law expressed their gratitude toward Devi. Being pleased by them, Devi asked them to worship her during Vasanta Navratri and then disappeared.

Further, the descendants of Sudarsana, Rama and Lakshman also worshipped Goddess during Sharad Navratri and got blessed and rescued Sita from Lanka.

This was all on Vasanta Navaratri, hope you would have got an idea about this festival. With this, we hope you get blessed by the grace of Goddess Durga. Happy Chaitra Navratri!